Some might believe I’m talking about a spectacular view standing amidst exotic scenery, anything but a boat part. Yet, for my husband and crew member Ricardo (name changed from Dick once we hit the Azores) that’s exactly what those thingy-magigees on the mast are: a lovely view.

I must admit they have spent a lot of time figuring out the best way to make a very serious repair to our mainsail mechanism thanks to Peter Stoops who had faced the exact same problem on the same passage 11 years ago.

He said I know what you need-a banding tool. Peter then contacted Tom Woodruff, owner of said banding tool, who kindly lent it and gave it to Peter who gave it to Doug Woodbury who gave it to wife Judy who handed it off to Gail (sherpa) who traveled to Horta who then reverently presented it to Max and Ricardo. Thusly, our boom shall never apart from our mast shall be (hopefully).

How this all transpired was Max noticed some bolts loosening around our mast roughly two days out from Flores (June 17). Now, I’m not too much of a sailor but even I, blob blogger sailor girl, realized that can’t be too good. Sure enough in a closer inspection Max said uh-oh. 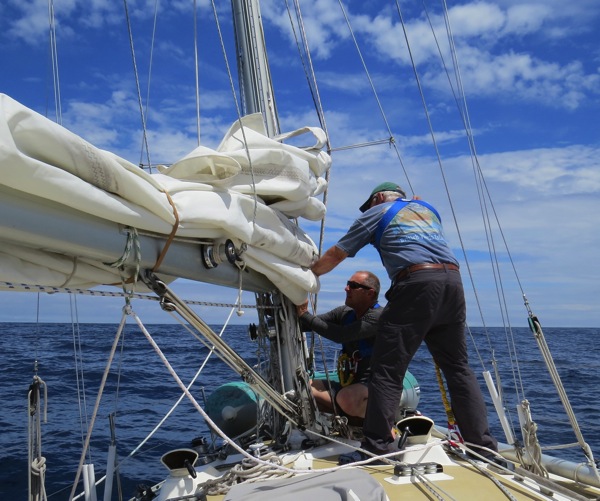 Actually he uttered something much more elegant and descriptive. Translated: the boom is becoming unattached from the mast. He and Dick (soon-to-be Ricardo) quickly relieved the pressure. We now had a broken wing on Juanona.

Doing research Max discovered this same sinful condition had occurred to fellow sailors, and a discussion of just what the heck to do was begun via the dial-up modem feature of the satellite phone.

A solution was found, a plan put into place, and Max and fellow sailors proceeded to coordinate a repair from Maine to Azores while continuing our passage to Flores under motor and sometimes jib sail.

When we arrived in Horta from Faja Grande Max sought out someone to do drill the fittings on the existing gooseneck plate and boom vang plate (I’m ever so slowly learning the correct terminology) to fit the larger bolts being sherpa’ed over.

The boom now was placed ever-so-gently on deck in anticipation of being re-connected. 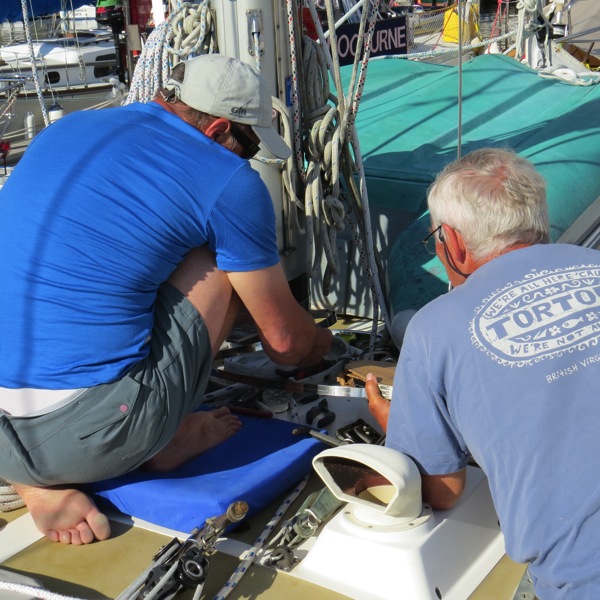 resulting in a boom that won’t go boom in the night (sorry, pad pun, I know).

And, even I, blob blogger sailor girl, have to say, it is quite a lovely view.

1 thought on “Oh what a lovely view”