That’s what, I fear, I’ve done due to a combination of Max operating the GoPro camera and my insistence on christening certain events (mid-passage, Gail’s arrival, newly met friends aboard…) dancing to “Happy”. So, I’ve created a monster and it’s moi!

But, more of that later if you’re not offended by middle-agers prancing about in very small spaces.

Anyhoo, let me share with you some highlights of our recent time with Gail and Ricardo these past few days. As you may know it all began with her arrival in Horta where Ricardo met her at the airport (If you’ve got eagle eyes and her husband did for he took the photo, she’s third from the left in the back row of deplaning passengers).

A bit easier to spot with this one:

A few days later we’re off to explore Faial in a car rental. Fortunately all of us don’t mind taking detours because the first ten minutes showed us the one and only highway around this island doesn’t necessarily mean one doesn’t get lost. And, so we did, rather quickly, I might add, due to my back-seat navigation. I gave it up with happiness to Ricardo who managed to do a much better job.

We were also looking for an industrial hardware store (quell surpris). Our last stop asking for directions, I hopped out of the car with the scribbled store name to ask this young man working in his yard.

That part was fine. What wasn’t so good was he had a dog behind a fence that looked like it could crack concrete with its jaw and proceeded to show me those said jaws. Swallowing and trying not to show fear (more like terror), I cautiously approached, the man kindly came to the fence and with a smile and lovely accented english pointed me/us in the right direction. Unfortunately, the staff weren’t too helpful but now we knew where to direct any other non-Faialian to this shop (we think).

Our second stop was some natural park off to the right. They had landscaped a small picnic area with tables and stools for those much younger than I

amidst ferns that were trees (Timothy Vail, your expertise, like your wife’s geological knowledge, is sorely needed)

I should have asked Gail to stand in front of this so you could get an idea of just how big this fern was–at least 5′ tall–or travel with my pencil.

Not quite believing this was REALLY a fern, I stepped closer and, sure enough, there were the tell-tale signs

The park also had an enclosure with deer, which we thought interesting but also a good thing they weren’t running wild (and, they think bunnies are bad…)

and, plenty of perfect spots for portraiture

In addition to the natural landscaped flora and fauna area there was an actual house set up as an example of a traditional rural one. 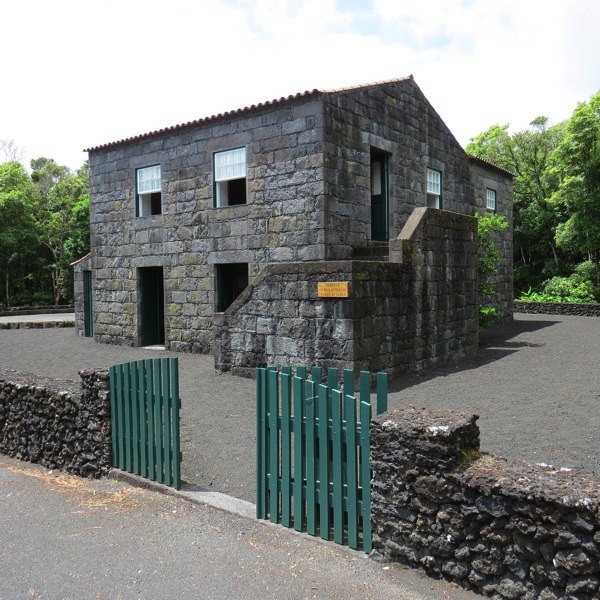 Touring the small backyard we found, to us, a unique outbuilding labeled “Poco”. It could either have been a cistern or a Roman bath. The guys liked the first idea, Gail and I were all for the latter.

It was interesting, but what we all really wished we had snapped a pic of was the sign with its hours for visiting: 11a-noon, closed for lunch, opening again 1-2p.

Unfortunately, there were quite a few groundskeepers but no one to answer any questions about anything other than where to use the loo, which I did. And, let me tell you, it was beautiful! 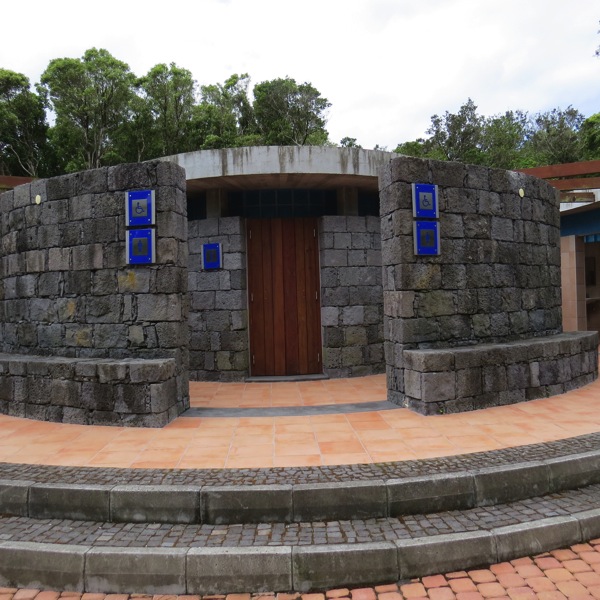 I took a video of it for it was truly one of the loveliest public park restrooms I’d ever seen, which I ALMOST posted here much to Max’s fear.

Next stop was a site Max, Chris and I had visited in 2002: the lighthouse on the NW corner of this island. In September 1957 a volcanic eruption, along with associated earthquakes, occurred. Activity finally subsided by October 1958. By then a small village had been buried, a new headland over 300 ft had been added, and approximately 15,000 people had emigrated to the US (hence direct flights from Boston to the Azores). 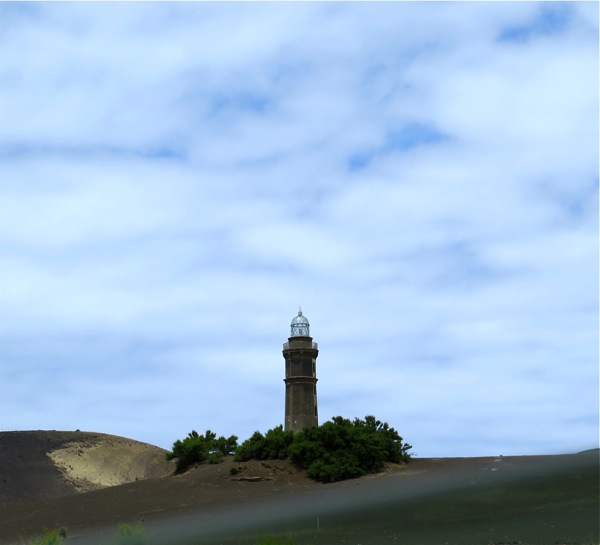 [fyi: I don’t know the people in the photo; but, I do know they didn’t fall off in spite of the guy sitting on the edge of the cliff, which, for me a fearer of heights, would be a nightmare and engender a trip to the loo.)

The new visitor’s center was stunning, especially the concept of having it mostly buried into the remnants of the eruption. 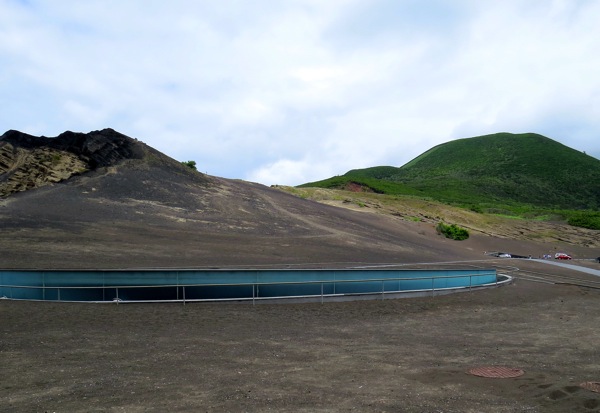 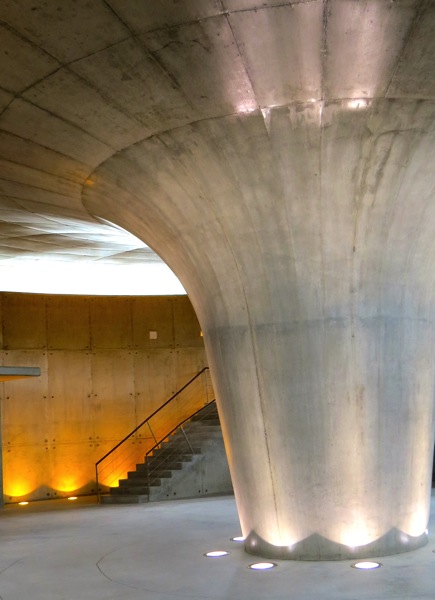 Inside we partook of some libations to fortify ourselves for the next round of sight-seeing. 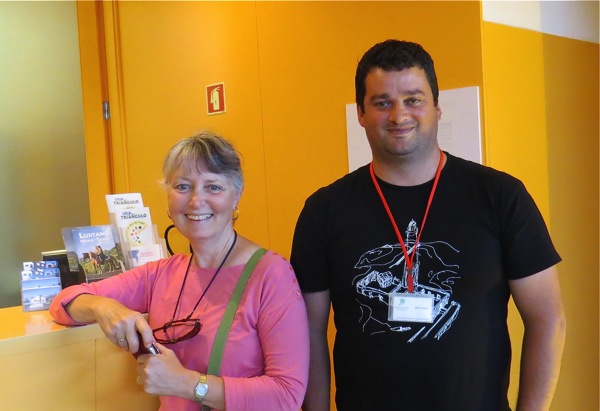 Exiting the center I couldn’t help but take some quick shots of the fine, silky volcanic soil covering everything on this point of land. For some reason I really love the idea of bringing the outside into my home (for once I’m being serious here so bear with me). Because of this I take photos of designs I think would work well for fabric, something I’ll never end up designing but at least like the thought. Okay, serious hat off, goof hat back on…

While walking to our car, I spotted a manhole cover and my attention was diverted to a pic for Ellen, my manhole cover diva previously referenced in an earlier blog. 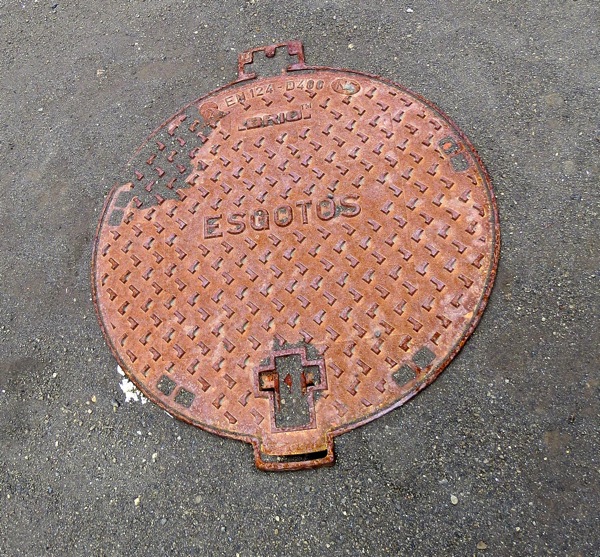 Finally we’re off in search of the caldera (volcanic crater that is one of the reasons Faial is here) and, what else, more food.

It wasn’t with some relief we were leaving the eruption site for our sailor book on Azores has a paragraph headed with a red-lettered ‘Caution’. It suggests avoiding a certain area (with longitude and latitude coordinates supplied) NE of Faial due to “intense underwater seismological activity”, which had been detected in May 2010 (ATLANTIC ISLANDS, AZORES, MADEIRA GROUP, CANARY ISLANDS AND CAPE VERDES, by Anne Hammick, Imray Laurie Norie & Wilson Ltd., 2011, p50).

It also asks anyone to report anything unusual when sailing within that area and provides an address, telephone number and email. And, if you are so stupid, I mean, curious, as to venture within that area, please don’t forget to take photos of your boat being surrounded by spewing lava and pumice torpedoes. That’s if you’re lucky enough that your boat isn’t one of those spewing lava and pumice torpedoes.

So, we begin anew another ‘do you think it’s this road?’ search for the volcano crater sitting in the middle of the island.

We find a cafe along the side and eat our ubiquitous hamburgers and fries, although Gail and I offload the burger from a huge bun and push the fries towards the guys who never seem tired of seeing more of them.

Next, the caldera. But, we do have breaks from looking for road signs because we have Max demonstrating once again his prowess of wall walking 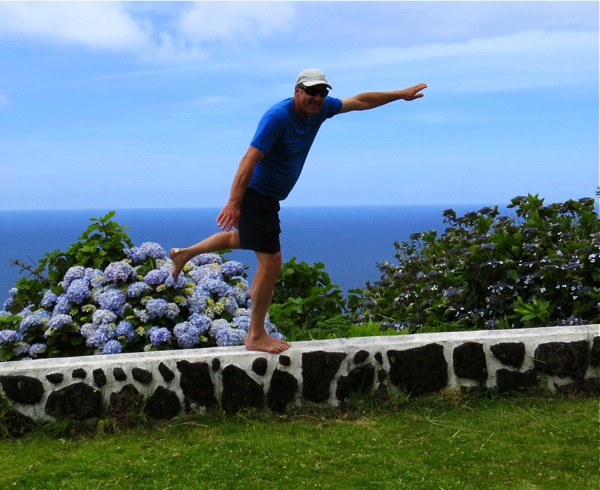 and, more recently in Santa Cruz at Orlando’s case, which you may remember.

We arrived at the almost-top of the caldera after zigzagging up a road watching for descending vehicles, of which there was only one.

The caldera was huge and the wind effect was amazing: stand three feet away from the opening and you could hear yourself talk; stand on the cusp and it was ‘eh? what did you say?’

and, did I tell you we saw hydrangea? 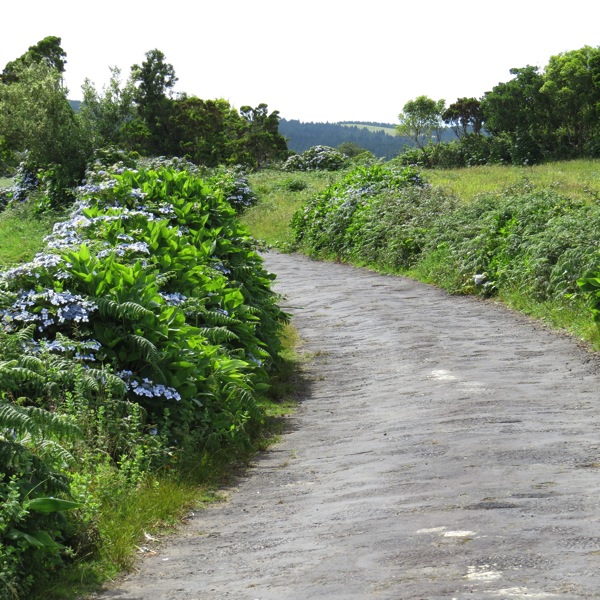 Okay, that’s it. I truly promise although I will still be taking photos of these as I truly can’t resist (obviously).

Another highlight during this past week was eating at this restaurant our friends Katie Wilkinson and Peter Stoops, both frequent visitors to these islands, suggested. It’s Canto da Doca, which serves its meals on hot stones on which you place your order and cook-to-order. It was EXCELLENT, and, as a review said, you can never complain to the chef… 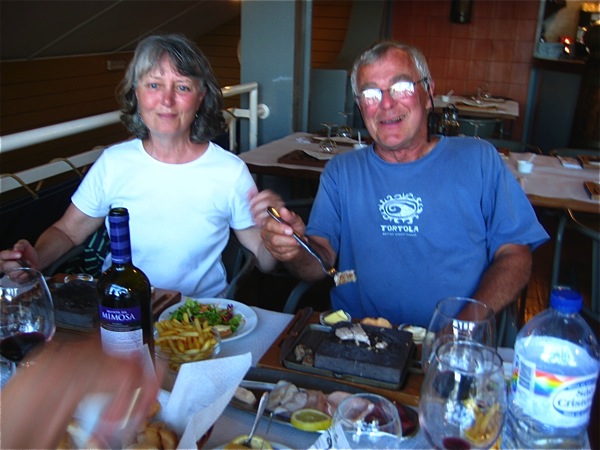 and, as is usual, the best part was butting into our neighboring table to converse, resulting in introducing ourselves to Edurado and Carla, 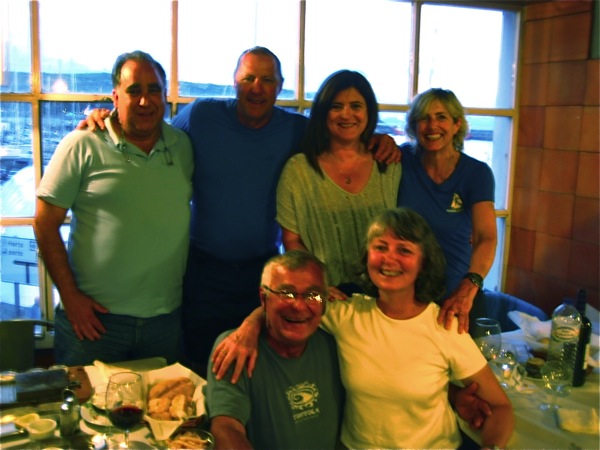 both of whom quickly became an addition to our time in Horta. Don’t tell me you’re surprised.

We invited them to stop by the next day as neither had been below on a sailboat (had to tidy up a bit).

They arrived bringing even more wine (only the difference being Eduardo actually knew what kind to get), and it was, yes, another opportunity to dance to “Happy”. The night ended with invites to Portugal where they both live.

(am trying to find the pics I took and the GoPro video of, what else, dancing to “Happy”)

But, one of the best topics of conversation, at least for Gail and me, was the REASON they were in the Azores… it was yet another time Eduardo had surprised Carla (her birthday is coming up) with a trip where she only knew what clothes to pack. My friend Carol Williams had that happen to her for her anniversary just last month. Hmmm…. Max and Ricardo, are you picking up any hints? Of course, for me, I AM on one of those trips.

And, I am promised a land room with a TUB so blob blogger sailor girl can take a TUBBY. Cause for celebration! And, best yet, I have witnesses of this, Ricardo and Gail :)

[End of PART ONE with PART TWO soon to appear…]

2 thoughts on “I’ve created a monster: PART ONE”