After our fairytale ride in France we left early the next morning, Tuesday, September 16th, heading from Dover to Ramsgate. With little or no wind and barely any current in the marina (most likely due to the water control using gates), it was a cinch getting off, unlike other marina pontoons around here.

We were escorted by two tugs. Actually, we just lined up between them as directed by the harbor control master.

As is typical, the harbor was busy with ferries coming and going.

Exiting the east end of the harbor we saw two of those heading towards France.

Off to our port were the blazing white cliffs of Dover 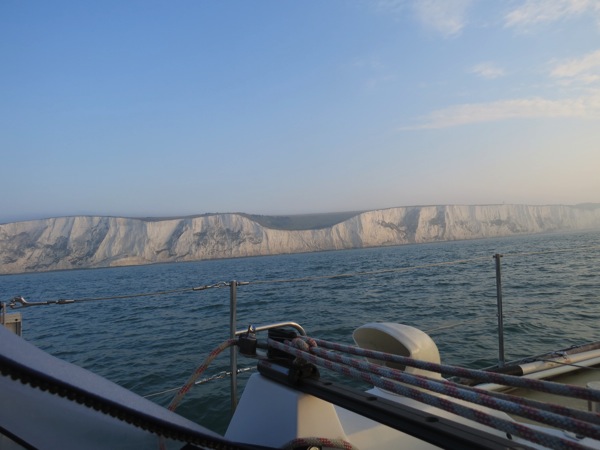 along with a lone fisherman tending his crab pots. It was turning into a beautiful day on the water.

Our next destination, Ramsgate, was only 15 miles away so an easy day. With little wind but favorable current we made it within 3 hours. Tieing up at the visitors’ pontoon, we headed for the marina office. And, boy, were they a wonderful bunch: John, Ned, Collin and Sean. They were our personal welcoming committee, eager to get us settled and ensure we knew where to run errands, making us feel right at home. They obviously enjoyed their lives and one another.

Ramsgate is the only Royal Harbor in England, designated as such by King George IV. Remember him? The big playboy of Brighton? The reason for this appellation: he was as taken with the hospitality in 1821 as we were in 2014. His niece Queen Vicky also liked it for she summered here on holidays.

Heading for the street running along the harbor, we stopped for a pick-me-up, Max ordering his now favorite coffee libation: mochacchino.

From there we continued east, touring the waterfront. As with seashore towns, boats of all sizes participated in the retrieval of British and French soldiers during Dunkirk; and, Ramsgate is home to one of these.

Reviewing the map of the area we saw there was a Charles Dickens House just up the coast in Broadstairs. With the weather hitting high 70’s and a lovely coastal beach and boardwalk ahead of us, we decided to continue our stroll.

Walking along the beach it’s hard not to be awed by the crumbling cliffs,

and, we found ourselves stopping every now and then to check out how well the bits of chalk write.

The flint We even tried striking the flint to no avail, but we did bring some back to the boat just in case… 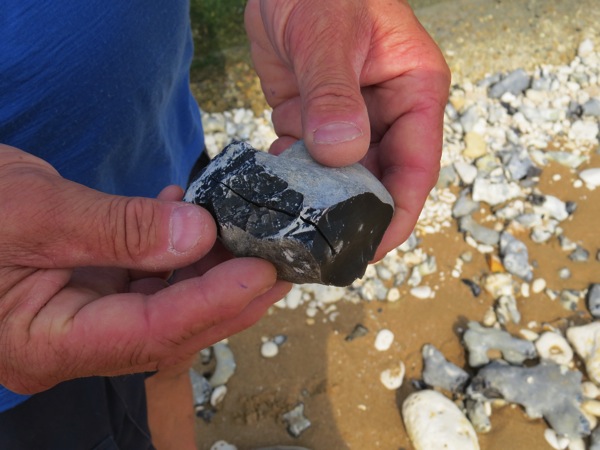 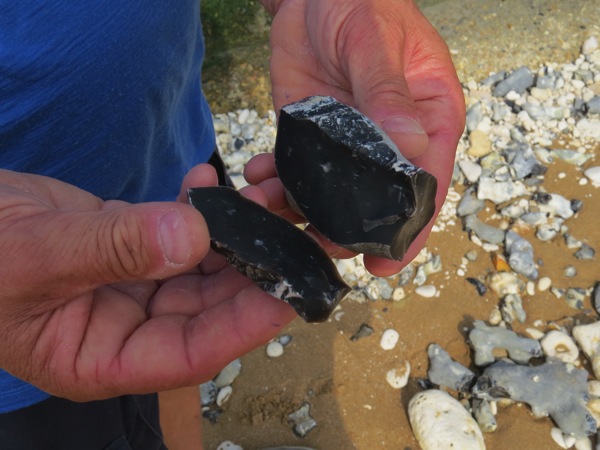 Reaching Broadstairs we spotted Dickens House and paid a minimal fee to enter.

What a delight it was, especially the man who could have been Dickens himself he knew so much about the author and those surrounding this famous writer. Again, it was someone I could have listened to all day. Max, too, was enamored with this older gentleman’s knowledge and gentle humor.

The more we stumble upon historical figures, the more I realize how many biographies I want to read, from Eisenhower’s to Diane of Poitiers. So, be prepared to fast forward if you’re not quite as interested in these ghosts from the past!

His fictional stories began as a series in publications that were later bound into one book, the first one being SKETCHES BY BOZ IN 1836. 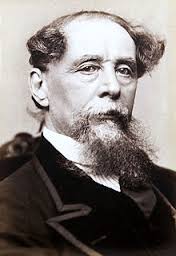 In addition to reporting and writing sketches, he became publisher of BENTLEY’S MISCELLANY, a publication in which he began OLIVER TWIST. He also edited other publications and included segments of OLIVER TWIST in those as well. This guy definitely knew the art of promotion.

Dickens was a busy man not only writing, editing and publishing but also lecturing. Several tours included the US (1842 and 1867-68), the latter earning him what would be roughly $1.5 million today. Not too shabby for someone whose father was thrown into prison for debt and who was pulled out of school twice, once at age 12 (went to work in a boot-blacking factory) then again at 15. The latter landed him in an office, which is where he began honing his writing skills.

Two interesting tidbits concerning Dickens US tours. During both of his trips to the states, he lobbied the American Congress to recognize the copyright of British authors whose work was pirated by American Publishers. Sound like another country anyone knows?

An online article by Philip V. Allingham (http://www.victorianweb.org/authors/dickens/pva/pva75.html) covers the fascinating history of Dickens’ efforts to institute an international copyright.

Another interesting side note is one I found on the webpage http://charlesdickenspage.com/america.html:

Following a Dickens reading in Portland, Maine, on the 30th of March, 1868 12-year-old Kate Wiggin, having missed the Portland reading, encountered Charles Dickens on a train bound for Boston. Dickens was quite taken with this precocious child and spent considerable time talking with her during the journey. He was amused when she told him that she had read all of his books, skipping over some of the “lengthy dull parts.” Kate grew up to be a novelist herself, publishing Rebecca of Sunnybrook Farm in 1903. In 1912 she published her account of the meeting with Dickens as A Child’s Journey with Dickens.

Briefly, he married Catherine Hogarth (1815-79) who wrote for the MORNING CHRONICLE where Dickens also worked.

I didn’t realize this but Dickens based all of his characters on real life figures. Even Scrooge was someone real, but, as our friend told us, the real Scrooge started out good and ended up bad.

Broadstairs was where Dickens spent holidays many a summer beginning when we was 25 years old. While there he met and visited Mary Pearson Strong. She lived at 2 Victoria Parade and became the model for Betsey Trotwood, the great-aunt in DAVID COPPERFIELD.

The front parlor was decorated exactly as Dickens described, and other rooms held some of his personal letters, his writing desk, and drawings and photos. For any Dickens fan it’s a treasure chest. I told our host I’d like his email so I could ask him any questions that might arise from reading one of Dickens’ books.

With heads stuffed with Dickens-isms we retraced our steps only taking the high road (above the cliffs) from Broadstairs back to Ramsgate and JUANONA.

The next day dawned hazy and windy, so we decided to wait another 24 hours for the wind to die. We decided to take the bus to Canterbury and scout out the area for a visit I was going to share with two college friends beginning of October.

It was another beautiful September day, and everyone else felt that, too, for Canterbury was packed. We found out there was a graduation ceremony, which also contributed to the crowds. Finding our way around this circuitous city was difficult. Signs would state “Tourist Information” but wouldn’t actually point you in the direction of the building. After asking at least three different people in the space of fifteen minutes we found it.

There, we picked up some brochures and decided to head to St. Martin’s Church, the oldest church founded in the English civilization. I’m going to add directly from Wikipedia because it says it better than I could any day:

“St Martin’s was the private chapel of Queen Bertha of Kent in the 6th century before Augustine arrived from Rome. Queen Bertha was a Christian Frankish princess who arrived in England with her Chaplain, Bishop Liudhard. King Æthelberht of Kent, her pagan husband, allowed her to continue to practise her religion by renovating (ca. AD 580) an existing church which the Venerable Bede says had been in use in the late Roman period but had fallen into disuse. As Bede specifically names it, this church was dedicated to Saint Martin of Tours, a city located near where Bertha grew up.

Upon Augustine’s arrival he used St Martin’s as his mission headquarters, immediately enlarging it (AD 597), and King Æthelberht was soon baptised here. With the quickly subsequent establishments of Canterbury Cathedral and St Augustine’s Abbey, St Martin’s lost prestige but retains its priority and historical importance.” 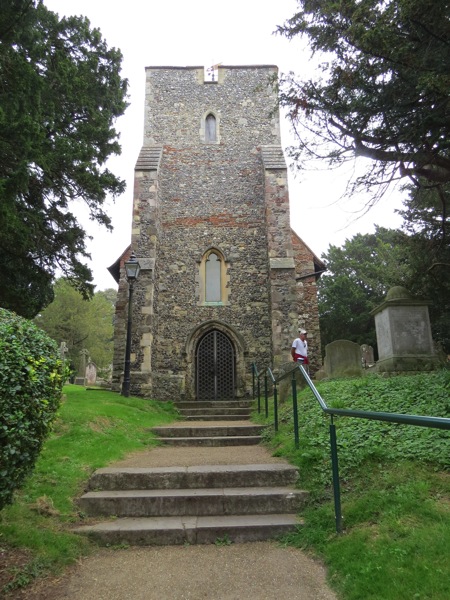 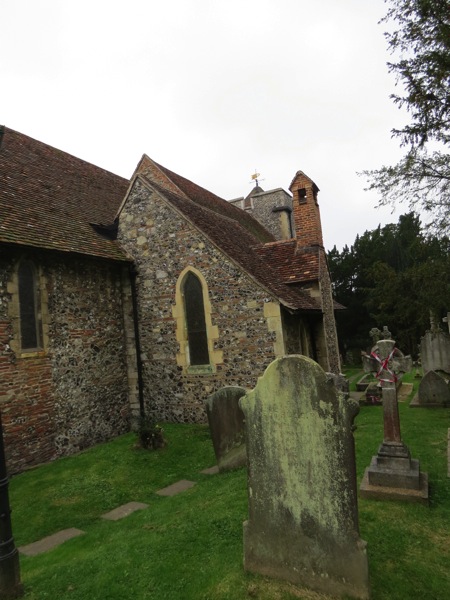 Unfortunately, even though the Tourist Information Office said it was open, it wasn’t. But, we looked around and then headed back to continue our hunt for ceramic heaters, which Max had been searching for since Portsmouth.

No luck around Canterbury (shopkeepers said it was still a bit early for stocking them). So, we caught a return bus to Ramsgate and prepared for the next day’s departure: crossing the Thames!

2 thoughts on “A Kingly, Kindly Port”