Say the above in a loud British accent and you will have heard echoes of that tirade from parents as they herded their exhausted kids away from London’s Natural History Museum stuffed to the gills with giant mammoths, ferocious and benign dinosaurs and lilting butterfly exhibits. This is what accompanied us as we stepped off the London Underground (“The Tube”) as a frustrated and tired Dad wrestled a baby carriage from the train and onto the platform.

The particular individual to whom I was referring earlier was followed by a passel of children all under the age of five along with some other kid-worn and cranky adults. When he followed his baby screech and yelled “Where’s SMELLY PANTS?”, we knew it had been an oh, so very loooong and terrible day.

All I can say is, I hope whoever earned the name Smelly Pants was wrecking sweet
revenge on that dad for, if owner of said pants was too young to answer back, at least his odifurous breeches were doing it for him.

The whole purpose of this side trip (via land) was to check out marinas likable for winter berths. With rainy weather and unfavorable winds forecasted for the next few days, we decided to leave JUANONA safely berthed at the Weymouth marina and head northeast by train.

Our first stop was a river city/town on the southern, east coast, where we booked two nights at Old Times Guest House (where we were wonderfully welcomed by the owner, Kelly). After visiting (and liking) Ipswich with its proximity to a small downtown, including great lap pool, lots of scheduled events, and the requisite cafes (for those lattes and now scones), we headed for one night in London to see Limehouse (pretty industrial feeling but also HQs for a great organization, Cruising Association) and St. Katherine’s (pretty elegant feeling with very polite city folk).

We were able to also do some sight-seeing, which is how we came to be around the prickly dad and tykes. Although we had planned to visit the Natural History Museum after the Victoria & Albert, the long, zig-zag line of zombie parents and excitable kids dissuaded us quite rapidly. We were just as happy to start our stroll to Princess Diane’s Memorial in Hyde Park. 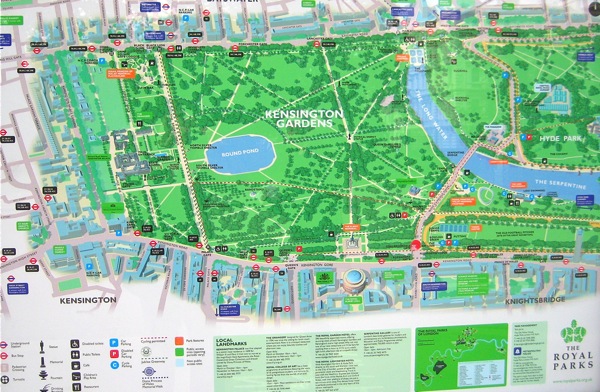 [Princess Diana’s Memorial is a bisected oval in the bottom right, just below The Serpentine.]

I had been mesmerized and enchanted by this memorial when I first saw it with my sister Betsy in 2010:

The second time only added to the wonder as kids frolicked in the water going round and round.

Built of stone from Wales and fueled by water that’s pumped out in the evening, circulated, and pumped back in refreshed every day, this circular sculpture offers children and adults the pleasure of strolling through a babbling, bubbling brook. About every 30 feet or so there’s yet another type of cut in the stone, forcing the water to gurgle a different way. 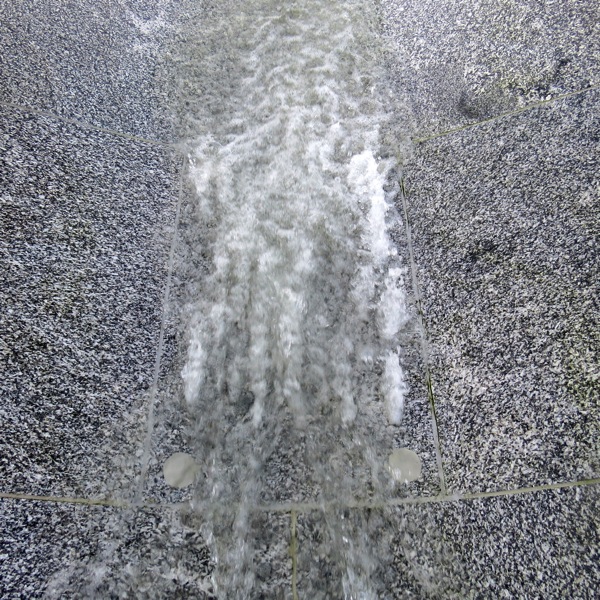 A gentle enforcer stood off to one side, calmly telling kids not to run. When they got too boisterous, he just asked them to take five minutes to relax and reset, then go back in. I don’t think you could have asked for a better ‘policeman’ to supervise these kids (I knew HE would never would belittle a kid by calling them Smelly Pants.)

We enjoyed the water

along with other adults

and, of course, the kids who couldn’t get enough of this playful stream. 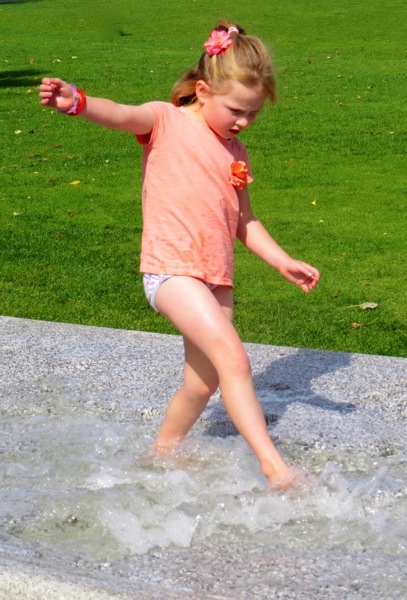 Too bad the tyrannical dad couldn’t have ended his day with his children here. He might been just a little bit sweeter… as, possibly, would have the pants.

You mean we’re REALLY going to use that thing hanging off the bow?

Considering this would only be the third time we’ve anchored in 2014, it was with trepidation that I approached the bow to prep our 55-lb anchor.

The first time, Dick/Ricardo was aboard and it was Faja Grande in Flores (June 20).

The second time we anchored just outside Velas’ marina on Sunday, July 6, to enter our berth the next day. It also happened we could go ashore to watch the bull run on the dock (a glimpse of JUANONA is in the background).

under the careful scrutiny of the captain, 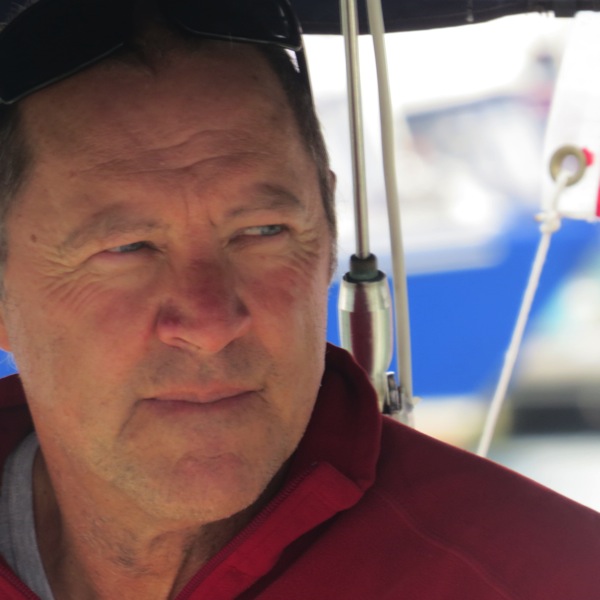 ate our breakfast of butter-and-jam laden scones along with a pretense of healthy sustenance, yogurt and fruit,

As we were preparing to anchor we kept hearing sonic booms. Finally, we realized why when we looked towards Bournemouth.

We got another display of the Red Arrows’ avionic prowess. Again, our jaws jung open and we just stared. 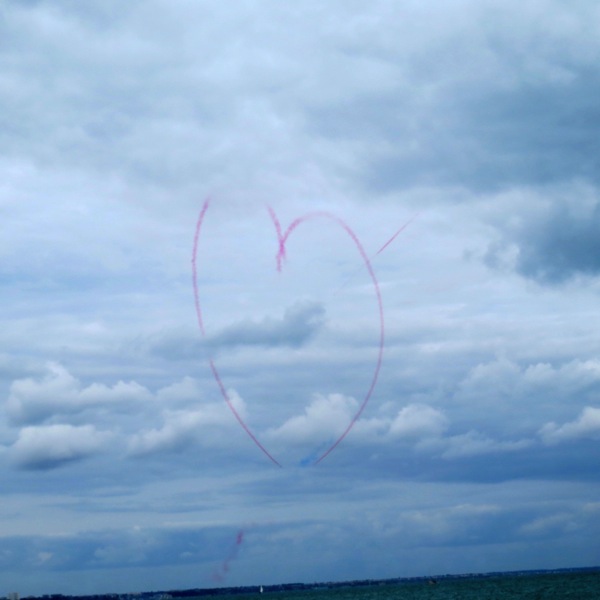 Rising and shining, okay, just rising, we left the next morning at 7 a.m. for Portsmouth to ensure we’d ride easily on the tides.

Snapping some of those beautiful cliffs in early morning sunlight

we consumed our ‘healthy’ English breakfast, 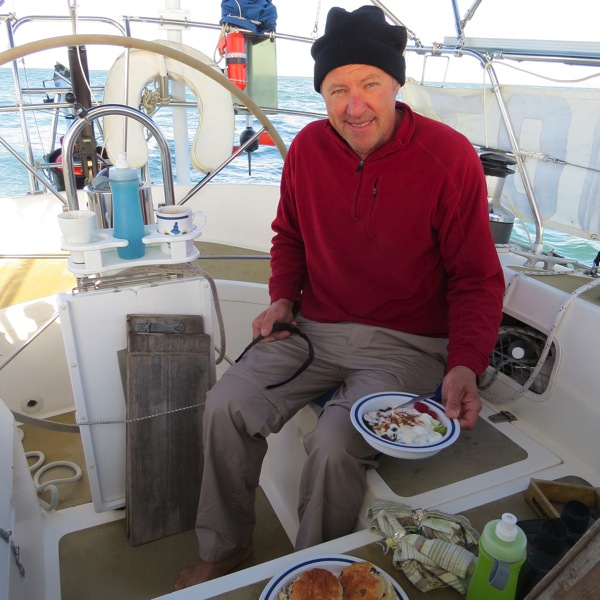 then proceeded to enjoy a blissful sail with wind at our backs accompanied by rollies, but ones you could predict so not queasy-making material, to The Solent.

For those familiar with this part of the English Channel, you’ll also know this area is notorious for amazing tidal currents. Actually, we sailed past Cowes on the Isle of Wight where the English held the first America’s Cup hoping to use local knowledge against the Americans. (Didn’t work.)

We took pics of the boiling current, never able to do justice with a quick snap but you get the idea.

Just know it was flat calm once out of this patch of water.

And, also know I was terribly glad not to have to anchor anywhere near here as we finished up in Portsmouth Harbor. It was a lovely day on the water :)

What IS it about men and their fascination with Boats? I swear if I see another old ship or catch a whiff of another tarry rope I’m going to go drown myself in lattes or, just to be part of a naval tradition, RUM, better yet, G&Ts.

For, that’s what we did most of our one day here in naval land. No, not drown ourselves in alcohol but went goo-goo eyed from peering at old things found on ships as well as walking on old ships perched on land.

Portsmouth not only is a naval shipyard of new but also of old, including hosting the HMS VICTORY, Lord Horatio Nelson’s ship on which he died during the Battle of Trafalgar off the coast of southern Spain, as well as the MARY ROSE, Henry VIII’s pride and joy (although this one he couldn’t cut the head off).

To get across we rode the ten-minute pedestrian ferry from Gosport (where our marina was located) to Portsmouth, catching sight of some window-cleaning

which, when seen from afar, would not be my idea of an ideal job. 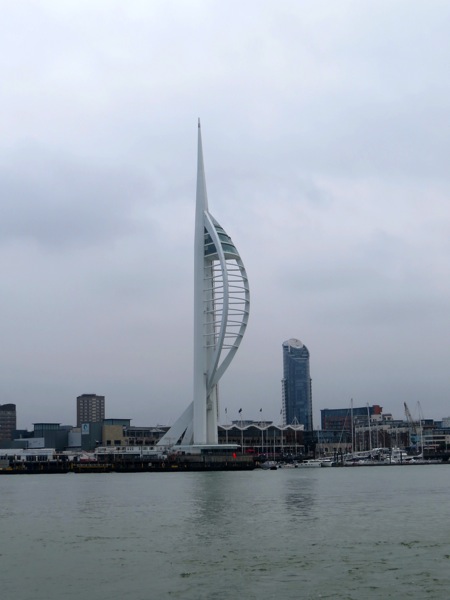 But, back on topic to why we were crossing from Gosport to Portsmouth and its Historic Dockyards in the first place…

I must say the MARY ROSE was an amazing exhibit. At first I thought it’d be an old carcass of a ship, actually only part of a ship. Yet, what we discovered was a captivating story-telling of a medieval ship’s demise and life aboard.

Briefly, it sank July 19th, 1545, during a stand-off in The Battle of The Solent, a three-day engagement where the French were hoping to draw the British fleet out of Portsmouth Harbor and the British refusing. MARY ROSE sank when it turned to shoot at the enemy ships only to be caught by a gust of wind in full sails. With netting covering the ship (used to prevent boarding by the enemy when alongside), less than 40 crew out of 500 survived in the 30-40′ deep waters.

The French did leave, which historians believe was due to not having enough fresh water aboard or the ability to obtain more due to the heavily defended, English coast. So, it could be termed a Brit victory of sorts. Yet, as one guide said, the reason you don’t hear much, if at all, about this battle is because Henry VIII who was there also didn’t want to hear much about the sinking of his prized possession. Nor, evidently, did his second daughter as Shakespeare kept mum on the subject, too.

MARY ROSE fortunately is being talked about now, and it makes for a fascinating display of life aboard a 16th century ship (In case you’re wondering, it didn’t seem all that appealing). Re-discovered in mid 1800s and raised over 100 years later with better technology, this huge artifact is still in the process of being preserved. To view the hull one peers through glass windows into a dry tank with an array of modern scaffolding.

Just as an aside, we were told the MARY ROSE was gently excavated in 1982 from its muddy resting place only to be gently lowered back down because Prince Charles was suppose to be there. According to someone we met while waiting for the train in Weymouth who happened to be good friends with the guy who oversaw this archaeological event, the second raising caused it to break apart; but, then, like with Henry VIII and Queenie Elizabeth I, you don’t hear anything much, if at all, about the second coming of MARY ROSE…)

Rather than bore you with my oohs-and-ahhs, I’ll just highlight some of the moments we enjoyed. Originally, I was thinking thirty minutes max to run through this museum only to exit dazed 2-1/2 hours later.

Old portrait of the MARY ROSE

Why Henry VIII didn’t bring this up at his banquets 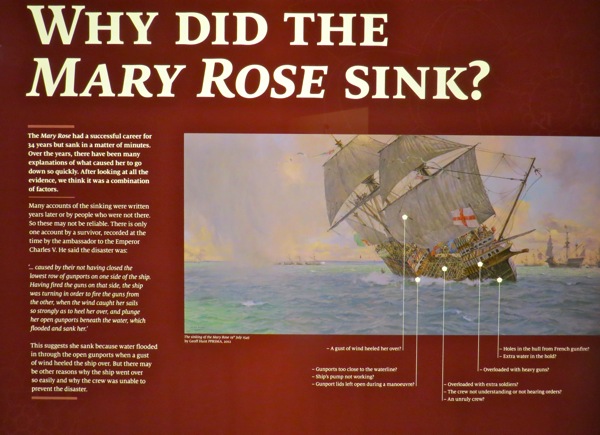 How the crew were stuck on the ship 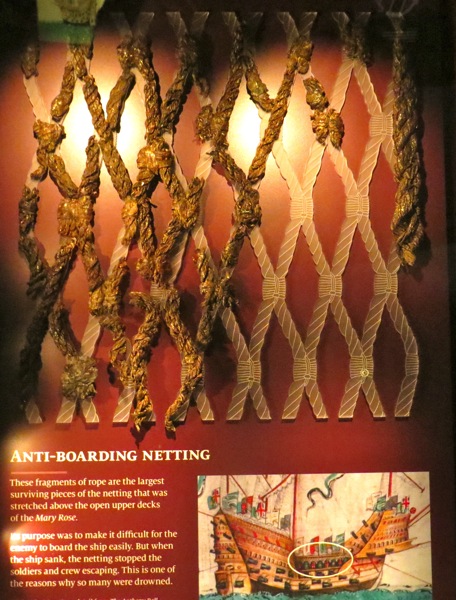 This canon dating from HENRY VIII’s time was how they knew the MARY ROSE was what was sunk in the mud. 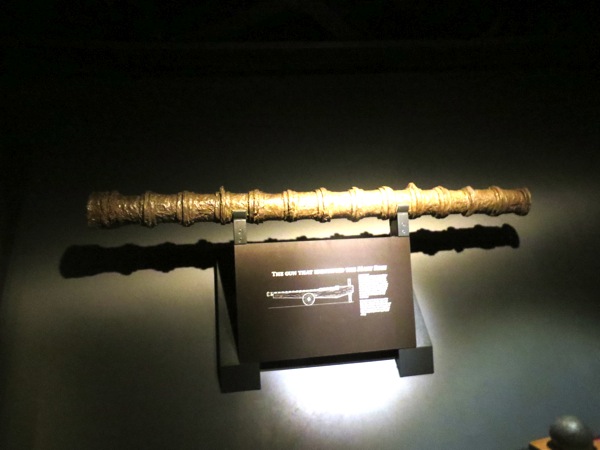 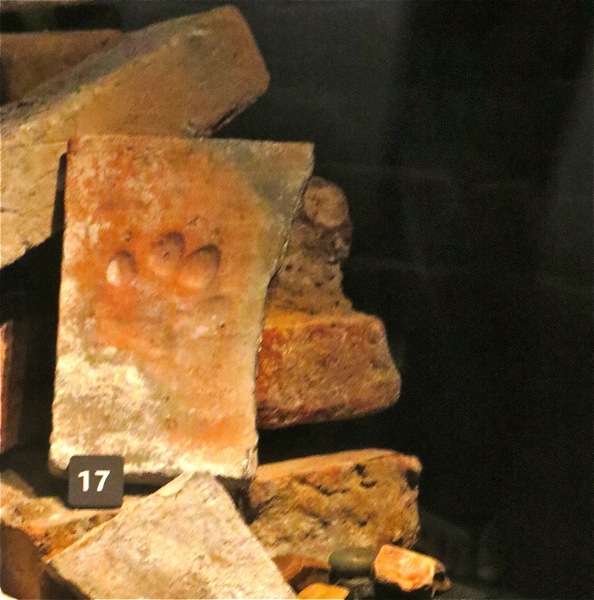 Because I thought it was funny when the little kid exclaimed in a very loud voice ‘look, there’s a butt!’ when spotting the displayed hip bones sitting atop leg bones (kid knew his anatomy).

Piece of the sail 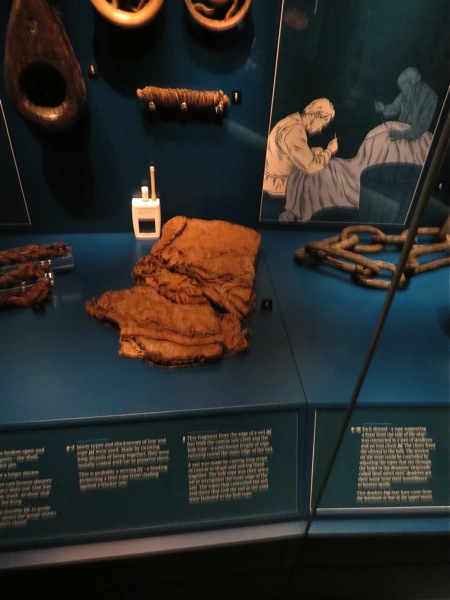 And, Max testing his ability to handle a medieval bow…

then getting some professional instruction… 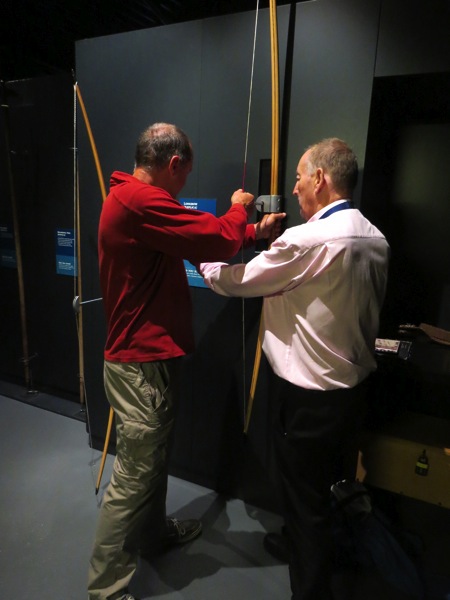 then REALLY testing his power when the guide mentioned he only had it half pulled back.

A Fletcher listening to how arrows were fletched

and, lastly, trying to convey the actual size of this ship 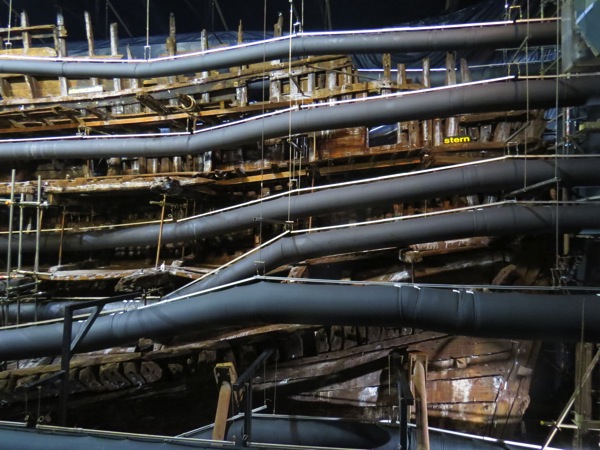 NOTE: To see how they’re preserving this, I found a wonderful article at this site: http://www.rsc.org/chemistryworld/2014/03/mary-rose-conservation-preservations. Scheduled completion is in 2015 when a visitor will get a completely different view of this historical treasure.

But, our day wasn’t over because we had HMS VICTORY right next door. Oh joy.

So, we trekked off to that, entering by ducking our heads 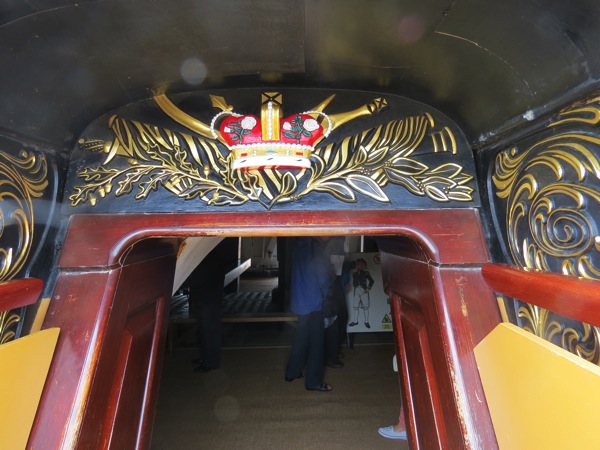 and continually reminding ourselves to do that as we wandered the maze of middle deck, upper deck, below decks, lower deck and out.

To me, the best part was Nelson’s own quarters, including where he discussed the Trafalgar battle plan with his fleet’s captains. They continue to commemorate the Battle of Trafalgar with annual dinners held in this location (actual table, though, is now in the museum next door). 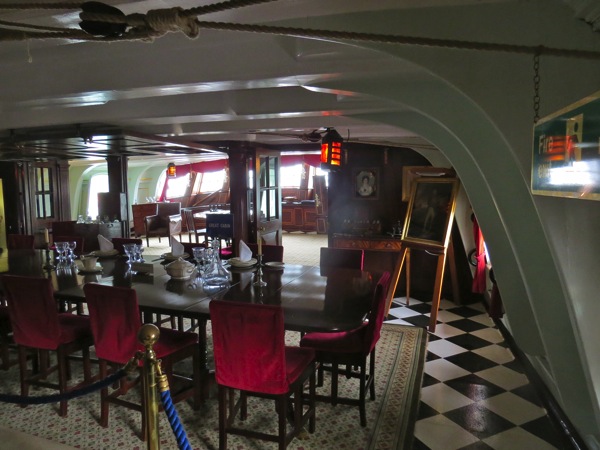 Nelson hung a portrait of his love, Lady Emma Hamilton, in his chambers (he had an interesting love life).

Where Nelson was shot was also noted. 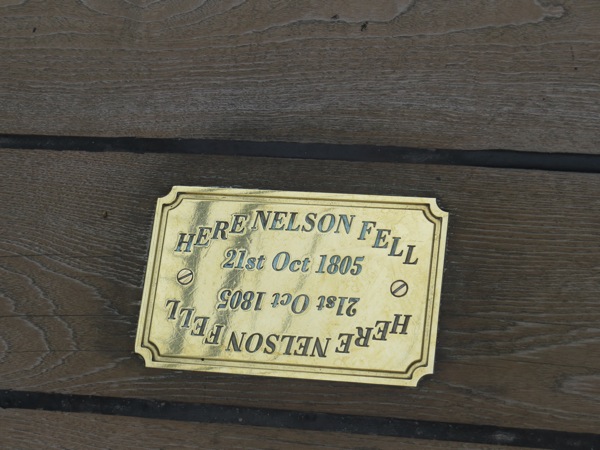 Finally, thirty minutes later we were out, or, at least, I was.

One does wonder what his career would have been like if he had lived. He was only 47 when he died and a brilliant naval strategist. He was also a great leader, taking interest in his men’s lives and ensuring they received credit for their accomplishments. After touring the ship and an accompanying museum it’s easy to understand why his country idolized this man.

All-in-all, the Portsmouth Dockyards offer a historical view of ‘back then’; and, I must admit, it was a day well spent. 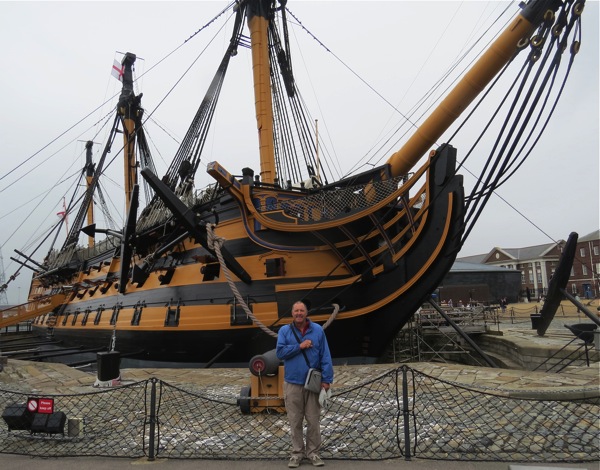 However, I do know you would not have found me on a ship way back then…