Tika had invited us to witness a traditional holiday event:  the Feast of Sint-Maarten (Saint Martin of Tours), who, legend has it, was a Roman Soldier-turned-monk known for his kindness towards strangers (and children and the poor), in short, an all-around-good guy.

On the eve of the fasting for Advent (November 12) a former harvest festival has become a popular children’s affair. What once was an occasion for poor children to beg for alms during a winter month has been transformed into an event similar to our Halloween. Children carry lit lanterns and a sack door-to-door. When the door opens the child sings a song and receives some sweets as a reward.

We’d been looking forward to this ever since Deborah told us Tika wanted to show us a typical Dutch celebration; so, we set off on our bikes for their home where we joined Deborah, Thijs, and Tika for a delicious dinner of home-made soups (it was Thijs’ night for cooking and we had a duet of hearty pea soup and squash soup along with a smorgasbord of tasty dips). With very satisfied tummies, Tika, Deborah, Max and I set off leaving Thijs in the role of door-opener-candy-giver.

Photos and videos don’t really provide the true wonder of hearing the sweet singing of a young child as she serenades the greeter; but, as you can see from the photo below, opening the door to such a vision is truly a gift to behold. 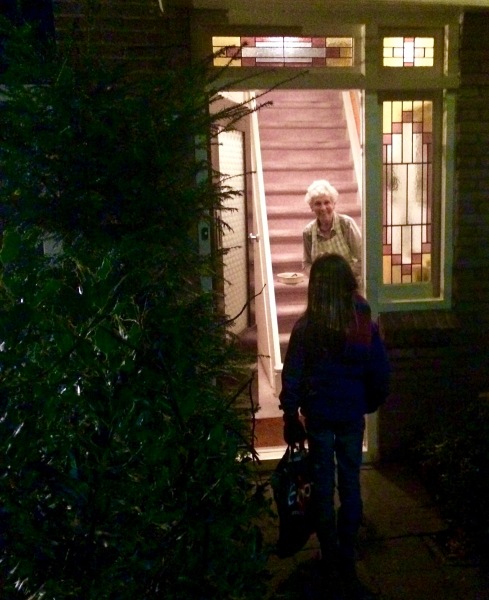 While Tika joined her friends for more neighborhood singing for treats, we returned to the house where we enjoyed conversation and tea.

As we hopped on our faithful two-wheeled steeds and cycled back to JUANONA, we were anticipating the next day’s tradition:  SinterKlaas’ arrival. Yet, both of us felt it would be hard to beat the magical night we’d had hearing a young girl’s voice lilting through the night bringing warmth to those who were fortunate to bask in such a gentle air.

The previous night’s lantern-lit singing was the prelude to the loud and cheerful day of SinterKlaas. This tradition evolved from the true personage of St. Nicolaus, the Bishop of Mira from Turkey, who loved children. Somehow he popped up in Spain and then made his way to the Netherlands by boat. His assistants are called Zwarte Pieten, ‘Black Petes’, something of a controversy due to their black-face make-up, a look associated with slavery as opposed to their historical reference:  Moroccan attendants.

To avoid any connotation of racism, the Zwarte Pietnen may evolve into multiple hues. After all, the point is SinterKlaas had helpers, similar to other countries’ morphing St. Nicholas into a rosy-cheeked, white-bearded jolly man with elves. By the way, I’ve read that Coca-Cola was the catalyst for St. Nick’s current portrayal. So much for tradition.

[To follow up on SinterKlaas, children place their shoes out in hopes of receiving a gift in the night. If good:  chocolate letters and marzipan; if bad, coal. Then on December 5th, the eve of the feast of Saint Nicolas, he drops off a burlap sack of gifts before returning to Spain. The custom is for the gifts to be home-made and to be accompanied by light-hearted poems.]

The morning of November 12th dawned crisp and chilly, perfect weather as a backdrop for a winter event. Searching for a good vantage point to witness SinterKlaas and his assistants’  landing, we ended up next to the tower gate close to the marina. 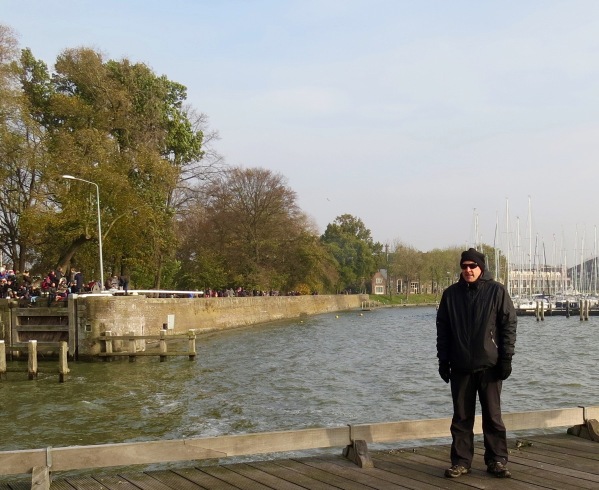 As I said it was freezing,

but that didn’t stop the crowd from hooting and hollering a welcome as various boats escorted the barge carrying this ‘royal’ entourage.

The hordes of people, the bright colors, and the festive air reminded me of our time in Fowey, England, during our coastal hopping from Falmouth to Ipswich. And, it was just as loud…

We followed SinterKlaas as he rode through the streets on his white horse Amerigo with his helpers handing out candy and pfefferneusse (peppernuts, which are small gingerbread-type cookies).

Being a bit old for receiving any treats, we opted for a hot snack, one, which always brings a smile to my husband’s face: kibbeling. 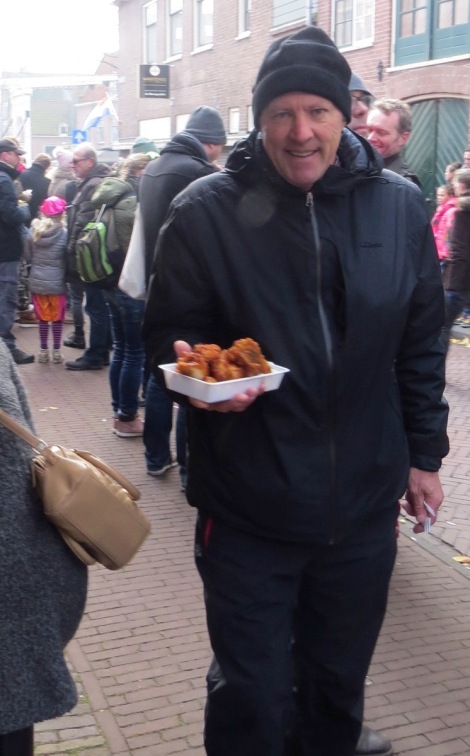 In spite of the warmth from the fried fish nuggets we needed to keep moving, so we headed to the main square, Grote Maart, then merrily returned to JUANONA and prepared for the arrival of friends and family from home.

Our holidays post-SinterKlass entailed a reunion of Fletchers, Bruces and Sumners. In 2014 Max and I were joined by my sister Betsy and our friends Smokey, Traci, Michelle and Danielle Sumner. Then we shared a house in Amboise, France and created our own Christmas spirits with food, wine, charades and laughter. Realizing another opportunity had arisen due to Danielle being back in France for the year, we planned another time of merriment expanding to include Max’s son Chris, and Smokey’s brother, Jeff, with his wife Lisa and daughter Nicole (son Matthew was braving frigid temps in Jackson Hole, Wyoming, juggling waiting tables and skiing slopes).

Traci, Smokey and Danielle (since graduating from college she’d taken a job teaching English in France while studying for her LSATs) travelled down from Haarlem for the day, 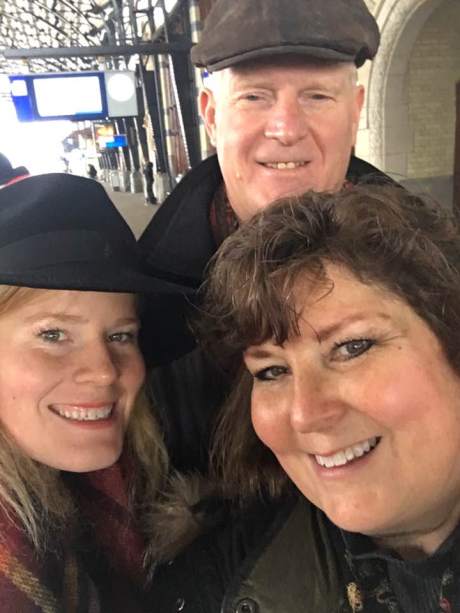 and we had a wonderful reunion aboard JUANONA with, what else, kibbeling for lunch.

On the 23rd Deborah, Thijs and Tika joined us for dinner and provided some Christmas carols with Tika and Deborah accompanying us on the recorder while the three Americans shamefully substituted a lot of ‘tra la las’ for words. We also received some lovely, home-made gifts, including a second Dutch book created by Tika to help Max and I learn the language.

Our guests noticed some oddly shaped items drooped over our electric radiator, and we explained they were ‘Max’s rice socks’ or, as my cousin Lynnie L. labeled them, Buddy Sox. We used them back home to warm up our bed and tried them aboard (although we have now graduated to small hot water bottles which worked a heck of a lot better). As you can see below more than beds can be warmed. 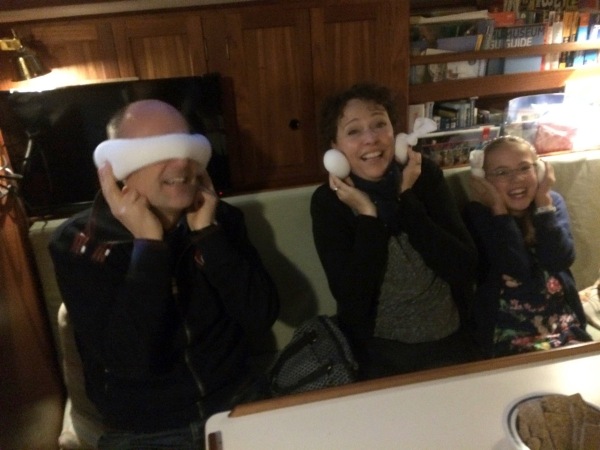 The next day we took the train to Haarlem where Chris, Max’s son, met us. Originally we had planned to use JUANONA as a B&B for the boys while Betsy and I shared an airbnb apartment, but the plan changed to renting two apartments due to logistics of getting JUANONA down and back within a reasonable time.

Betsy quickly spotted some holiday flowers, as we trundled our luggage around Haarlem looking for our apartment. FYI: neither of us can resist the abundance of beautiful and inexpensive flowers decorating the stalls and shops around the Netherlands. We later discovered Traci had also fallen under the spell of these botanical beauties. 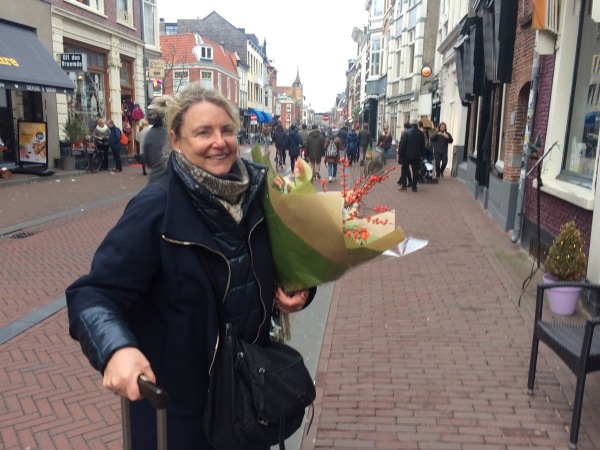 With everyone together on the 24th, Max, Betsy, Chris, Smokey, Traci, Danielle, Michelle,  Jeff, Lisa, and Nicole landed at a restaurant featuring Euro-Asian meals and lots of excellent gin and wine. After five hours we realized we’d missed the Christmas Eve service at historic St. Bavo’s churchbut could still catch the al fresco singing in the Grote Markt, where we joined our voices to the hundreds singing along.

As Christmas week continued we enjoyed wandering around Haarlem and various day trips, including a night-time river canal trip in Amsterdam to experience the Light Festival with Deborah, Thijs and Tika.

One of the nights we managed to meet up with our brother-in-law’s niece, Katie Stover, who works for New Earth Films as a production manager. She joined us for a meal with the Sumners, which Betsy and I hosted and Max cooked (good combo!),

Another day Betsy and I toured the Frans Hals Museum. The museum was featuring a special exhibit of Dutch Masters from the Szepmuveszeti Muzeum located in Budapest, Hungary, and currently undergoing a renovation.

No matter how often I see paintings by these 17th-century artists I’m still in awe of just how they managed to create such works of beauty. The pictures below were snapped with an iPhone so not the best, but you get the idea. Just look at how the gold braid actually glitters, 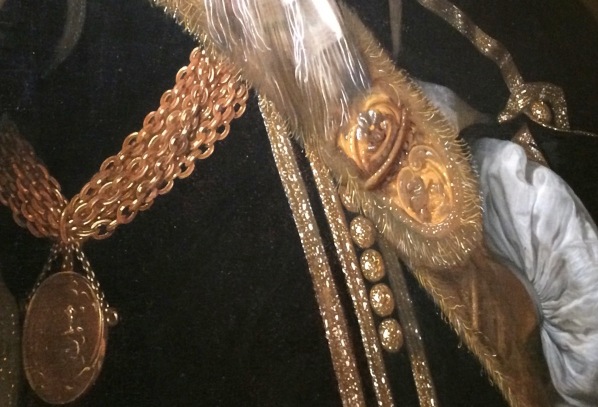 the metal shines as it reflects the polished light,

and, the green goblet captures pure water. Unbelievable (to me).

With everyone having different travel arrangements (Belgium, Ireland, and the USA) the four of us celebrated a rather subdued New Year’s Eve with sparklers spelling out “2 0 1 7” while standing in a deserted Grote Maart. Surprisingly most Netherlanders celebrate new year’s eve by staying home. Katie, Craig’s neice who lives in Amsterdam, said it’s primarily due to it being the only day of the year when the Dutch can purchase and set off firecrackers. This results in a night punctuated by loud bangs and others taking sanctuary away from potential explosive injuries. 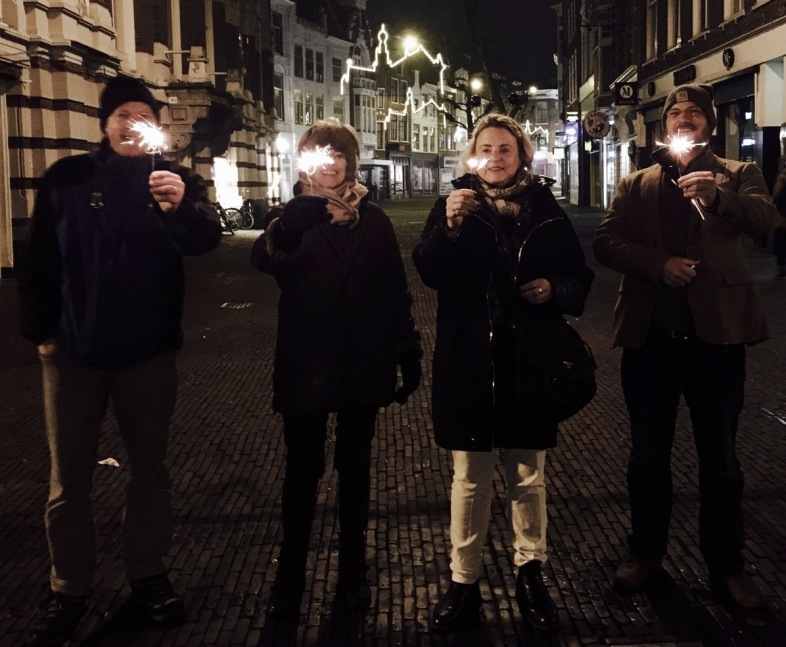 Our last few days were spent in Amsterdam where Max, Chris, Betsy and I rented another airbnb right on a main canal street, Prinsengracht. Betsy and I took another canal boat trip, this time during the day; and, like what happens on JUANONA, we were boarded by the police. When I asked the captain afterwards he said it was expected as the company had been given notice a month earlier by the police and the owners were still working on complying with the regulations. All of that aside, this Classical Canal Boat tour was a relaxing way to see parts of the city while hearing bits of its history.

One of our last festive events was a post-New Year’s dinner thanks to brother Cam and Carmen; and, thanks to Betsy, we had a wonderful restaurant in which to celebrate due to her having stayed at the hotel earlier with friends. 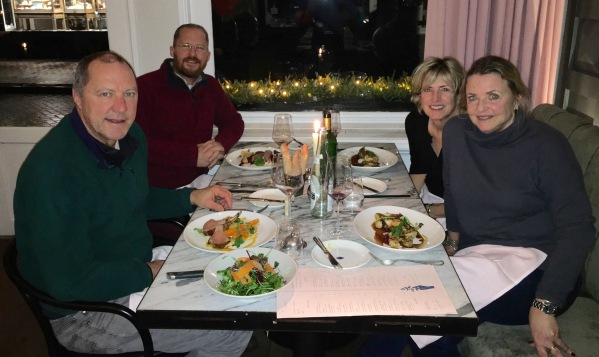 After two weeks of family-and-friend festivities we found ourselves alone and back aboard JUANONA. A rather quiet re-entry into January after such a jovial holiday.

Yet, there’s always the possibility of another two-year reunion in 2018… :)