With Wifi pretty iffy and cell difficult to use at times, I’ll try to keep up with posting but may often be a wee bit behind… this one being a perfect example of such!

Reading and hearing about Quimper, Finistère’s capital, we knew it was another not-to-be-missed, charming Breton town. And, knowing we couldn’t reach it easily by sailing up the L’Odet River (a future stop further south), we took a bus to Morlaix and rented a car for our journey south.

Yet, before we left we performed our now in-grained exercise of inquiring of the nearest Tourist Office, “What do you think we should see?”

Lo and behold we discovered a flock of religious sites famous in this area:  Les Enclos Paroissiaux (Parish Closes).

Defined by a grouping of five structures–church, churchyard (once the cemetary), ossaury-chapel (bone depository when the graveyard became too crowded), calvary (not a horseback troop but a cross watching over the dead), and triumphal arch – all enclosed by a wall – Finistère featured over 20 of these Closes.

Thanks to the demand for leather, hemp and linen/canvas Bretons grew wealthy during the 16th, 17th and 18th centuries. And, what better way to spend your money than trying to one-up your neighboring village by building the most impressive religious site? Oh, and to give thanks to your Catholic god for your prosperity.

With limited time we managed to do stop-and-go’s at five of the most famous ones.

And, when I say stop-and-go’s, I truly mean running in/peering around/running out. Our visits of each site must have broken the record for the ‘seen-that-been-there-done-that’ touring. Which is why the only way I can recall which is which comes from checking each photo’s GPS location.

So, a quick litany of our Parish Close Sites follows below, beginning with our first:  Saint-Thégonnec.

The church glittered and preened with the usual gold-toned altars and pulpits boasting over-the-top decor.

Among all the pomp one piece of furniture stood out due to its simplicty:  the Archives Cabinet. To unlock it required the presence of three keys with the priest, the local lord, and the churchwarden each holding one.

Back outside we circled the calvary. As our first exposure to one we were a bit stunned to see the numerous, in some instances cartoonish, figures decorating a multi-sided cross.

However, use of visual storylines made sense considering the lack of literacy during this time. (FYI, with regards to all of the tongues sticking out, I read that it’s a part of the body symbolizing evil in man.)

Guimiliau Parish Close was one of the more beautiful ones, most likely due to its smaller setting and, thus, more intimate feel. 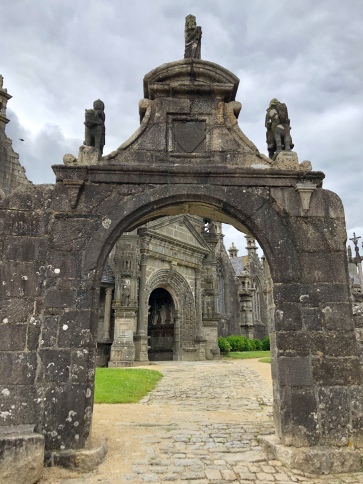 Drawn to its more manageable size we spent the most time here inspecting the elaborate carvings found throughout the interior: 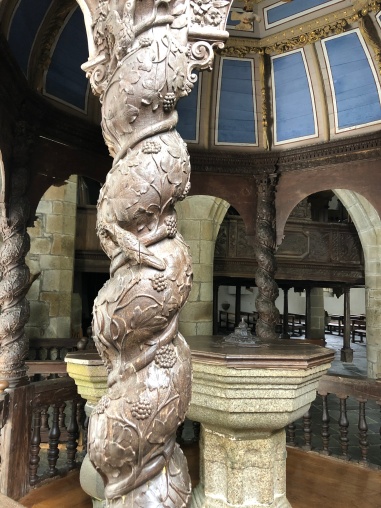 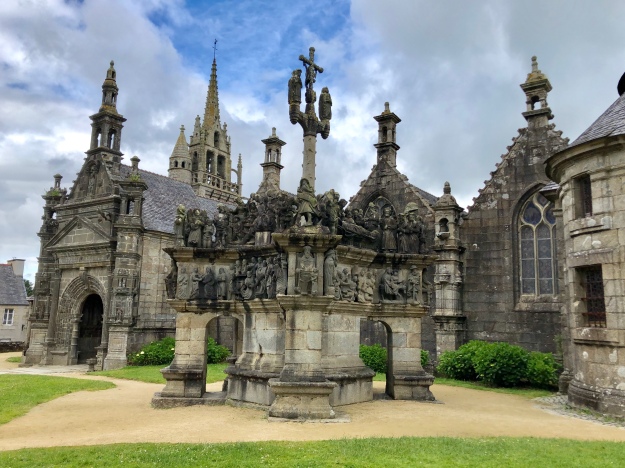 and a platform allowing a priest to instruct parishoners on the story of Christ.

Driving into a rougher terrain, we noticed the churches became a bit sterner in appearance. One being the Plounéour-Ménez Close.

Amidst the medieval decor a banner introduced a modern and sobering touch. Later I read the subject was a Polish friar arrested and sent to Auschwitz. After someone escaped from Kolbe’s barracks the Nazis selected ten prisoners to be placed in a chamber and slowly starved to death. Kolbe volunteered to replace one of the chosen men. He ended up being executed after two weeks as one of the four men still alive. He was canonized in 1982 by Pope John Paul II. The man who was replaced survived the war and spent his life touring the world and speaking about Kolbe. He died in 1995.

Commana’s Parish Close appeared to be the ‘roughest’ of the four we’d seen this morning, yet its wooden reredos (ornamental screens placed behind altars) take the prize as Brittany’s most glorious according to a brochure. A placard in the churchyard attributes the ‘technical perfection’ and the ‘exurerance’ of these carvings to the naval sculptors from Brest (when they weren’t building boats). 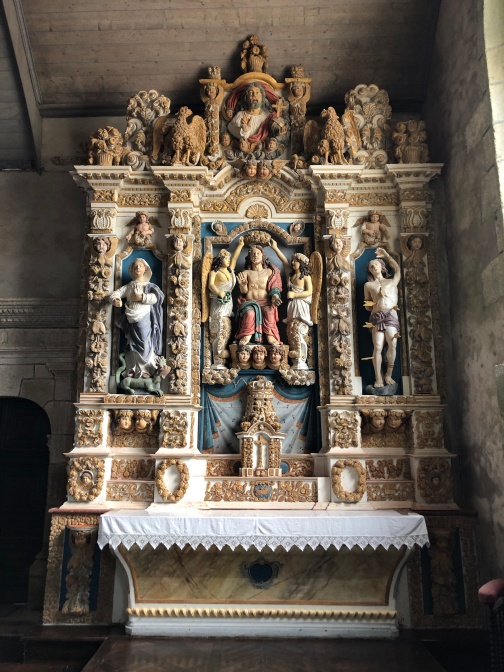 By now we had visited four of these religious sites in less than three hours, including driving time of an hour. A graduate degree in religious architecture and art would have increased my interest tenfold. Either that or a guide who could explain it all.

Continuing on we began to climb to a bit higher elevation with sweeping views on either side. Atop one hill we noticed a chapel and decided to check it out. Turned out to be perched on one of the four highest peaks in the area:  Mont Saint-Michel de Brasparts (1,253 ft).

At first glance the small chapel appears lonely, but determined to stand its ground. And, when we stepped through the small doorway we saw colorful and disparate offerings giving thanks on a wide range of issues. I love the fact the location served as a site for worshipping the Celtic sun god :)

We stopped at one more Parish Close (couldn’t resist), Plebyn, which was undergoing repairs but allowed us a peek of the unusual three-bell tower

and a much simpler and easier to ‘read’ calvary. 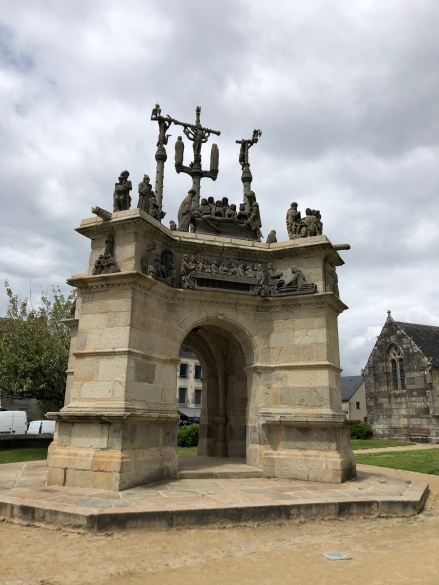 By early afternoon we arrived in Quimper and proceeded to yet another church. Begun in the 12th century the Cathedrale St-Corentin stands in the center of town on a lovely square ringed by cafes and begging for lively fairs.

Its dominance, though, diminishes a bit when you enter. Looking straight down the nave to the chancel you notice a slight skewing to the left. This came from a decision in the 19th century to add the twin towers without compromising the 13th-century sanctuary. 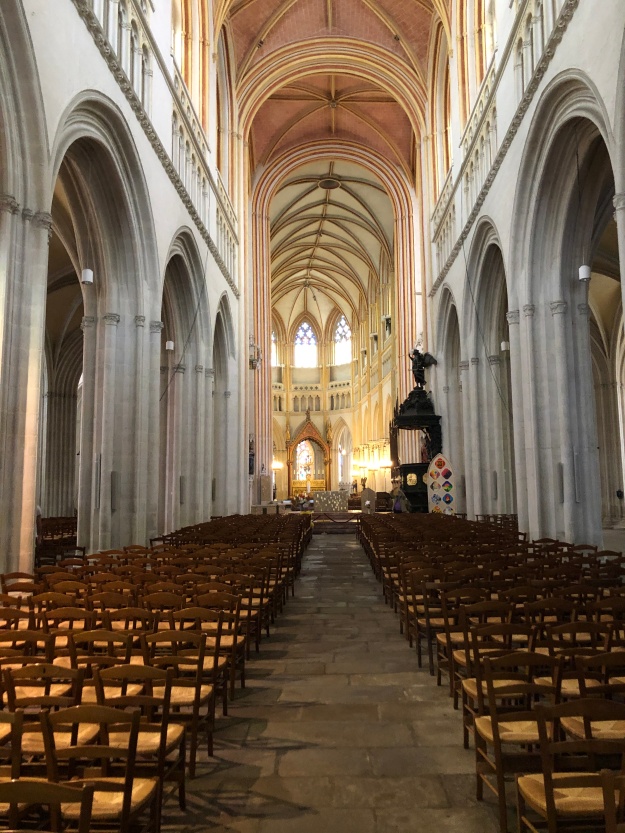 They later said it represented the tilt of Jesus’ head on the cross. Nice try.

What this ‘head tilt’ did, though, was bother Max who kept wondering why they screwed up the comforting symmetry of a straight shot to the altar…

Next door we visited the Breton Museum located in the former Bishop’s Palace (built by the Rohans in 1508, the same family whose castle we toured on another road trip). We saw an excellent, temporary exhibit on the Gallo-Roman period following Caesar’s 56 B.C.E. conquering of the Veneti, one of the province’s five Gallic tribes. Armorica became Roman. One of the tribes, the Osismii (meaning ‘the furthest’ in Celtic, probably due to the western-most point of Gaul)  occupied what is now considered Finistère, one of Brittany’s four departments (counties).

The Romanizing of the former Gallic culture was evident in finds such as this Iron Age stele rechiseled to show Roman gods. Although, I doubt this stamped out worshipping of Celtic gods entirely…

These Iron Age steles were particular to western Armorica along with underground galleries close to settlements.

Going back even further to the Bronze Age, the huge supply of tin led to a huge production of goods.

Surprisingly, this mound of pristine axe heads was used for exchange and exporting, not for slicing and dicing.

After perusing early history we climbed stairs to the permanent exhibits, which seemed quite small and brief. On display were statues of several of Breton’s beloved saints:

and Saint James (bro of John the Apostle) whose tomb at Saint-Jacques de Compostela in Spain is the second most important pilgrimage after Rome (note the scallop shell on his pouch).

the traditional ceramics started in this area in the 1600s, 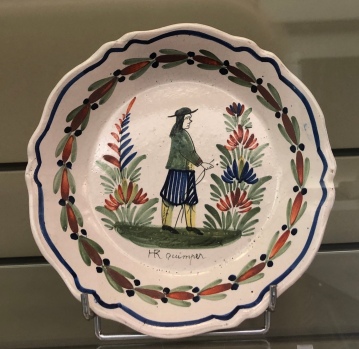 and, the Swiss-army knife of beds:  the lit-clos or box-bed where you can sleep, sit on the bench, and stash clothes or other stuff in the chest under the bench.

Interestingly, even in Brittany, a relatively small geographical area, the design of these beds varied:  this one had two sliding doors popular in Cornouaille, whereas in Finistère the lit-clos generally only had one, while in Morbihan the beds were usually curtained off and half-closed with no doors.

We didn’t make it to the Musée des Beaux-Arts located on the square opposite the cathedral but did wander around to soak up the medieval-ness and beauty of this city.

And, to take advantage of you-know-whats ?:) 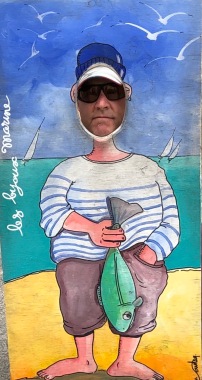 We left the next day to return to Roscoff back on the north coast. The only site on our to-see list involved a monastary called Landévennec located on the River Aulne. Unbeknowst to us ‘the land of priests’ is one of Brittany’s taglines, or so says one of our books. And, it’s not often we can see a group of live monks.

Set in a lovely wooded area, 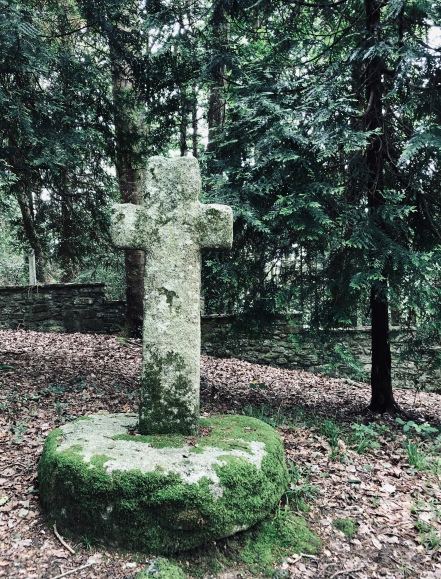 we entered a modern church

and enjoyed the 2pm NONE, one of the Horaires des Office. I quietly clicked on recording for a short stint to capture, to me, a special moment. Not because I’m religious (just ask Bobbie, Ellen and Carter about that) but because those sounds create a haunting atmosphere.

We also found ourselves on the continuation of the GR 34, the 133km trail outlining Brittany’s coast.

Ending up on this trail off and on the past three weeks I think it’s a wonderful alternative to getting your scallop shell at Spain’s Santiago de Campostella. Although, in speaking with Cami, a local Breton (who had just finished two months on the Norman Trail) this coastal path may not offer much in the terms of convenient lodging.

On the road again we ended up taking a side tour to Locronan. The Grande Troménie (a 12-km trotting around of religious banners following in the footsteps of the 6th-century founder of the town, Saint Ronan) occurs every six years in early July, 2019 being the sixth year. Although we’d miss it, photos captured previous ones as costumed Bretons exited the church to begin their march. 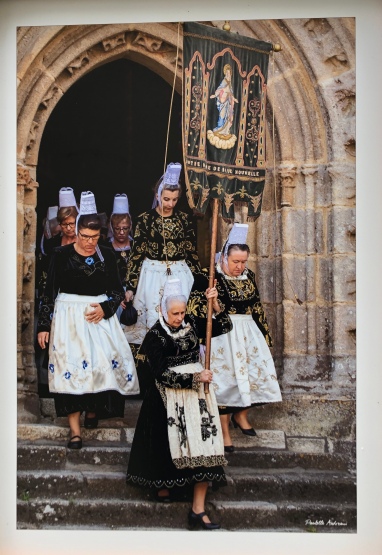 With a history tied to canvas (supposedly even the Vikings shopped here for their sails) the town grew into a lovely medieval one. And, it’s well worth a stop no matter how brief. 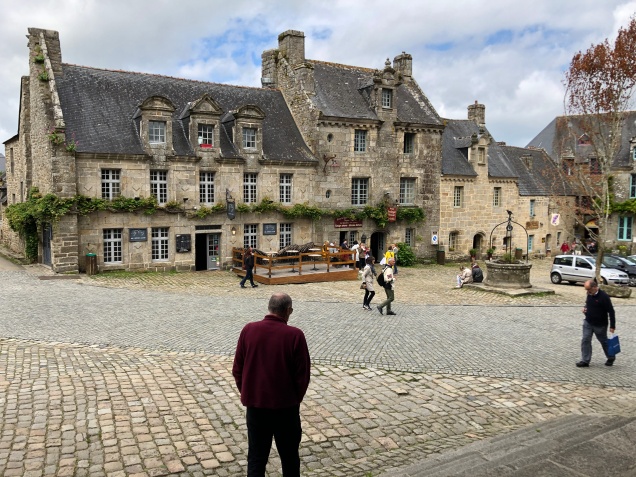 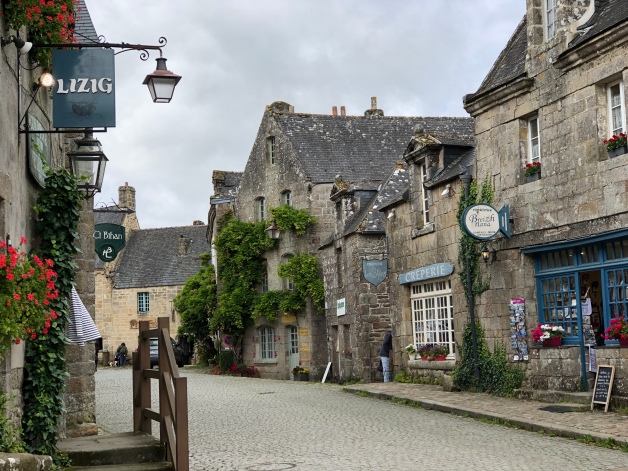 With that, we concluded our road trip in this part of Brittany and traded our wheels for sails.

But, not before one more photo from Roscoff. Now, that’s a head tilt… :) 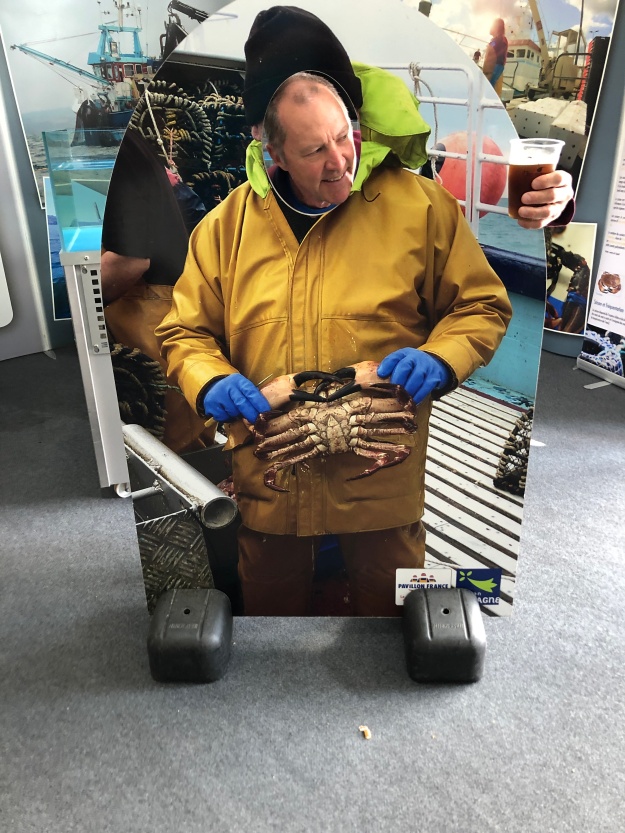