Heading to the Italian side the next morning we passed a church steeple rising from the man-made Lake Resia. Man-made due to being flooded in 1950 to create a dam for electricity.

And, in case you’re like me and aren’t exactly clear on the governance of this region here’s a quick explanation:  this State of Tyrol is one of three areas designated by the EU as a Euroregion†. Italy’s South Tyrol (Süd Tirol) and Trentino form the southern and eastern parts of this cross-border triumverate.

† “A Euroregion is a cross-border territorial entity that brings together partners from two or more cross-border regions in different European countries. Their purpose is to create a coherent space that is developed collectively to ensure that the border is no longer an obstacle but becomes a resource and an opportunity for development. To do this, it creates a framework for cooperation that makes it possible to bring together the different players and to put in place common policies and projects in areas such as regional development, transport, the local economy, cultural activities, the environment and so on, always in accordance with the specific features of each border area.” (Espaces-transfrontaliers.org)

The cooperation must work well since this Euroregion is one of the wealthiest in Europe, with low unemployment and a high standard of living. No surprise tourism plays a large role in this area’s economic health, with the Austrian Alps and South Tyrol’s Dolomites providing a playground for all-season activities. We were extremely fortunate to meet up with Christine and Jürgen for picture-book strolls in their backyard of Austrian Alps.

While these bordering areas do work together, the newly elected Austrian prime minister Sebastian Kurtz seems to be keen on stirring up nationalistic fever. In 2017 the coalition government, which includes the far-right Freedom Party, suggested the German-speakers in South Tyrol (roughly 66% of the population) should qualify for dual nationality by adding an Austrian passport to their Italian one.

Many in South Tyrol are amenable to obtaining Austrian citizenship. Not only are they in sync with the Austrian culture but also prefer to be linked to Vienna’s economy over Rome’s. This suggestion by Austria had inflamed the Italian nationalists with the leader of Brothers of Italy (so much for sisters…) shouting the slogan, “Hands off Italy!”.

This push-pull amongst the South Tyroleans between Austria and Italy isn’t new. For 550 years the Austrian-Hapsburg Empire ruled this land until 1918. In 1915 the Allies ceded South Tyrol to Italy based on the Secret Treaty of London when Italy agreed to support the Allies. With the rise of fascism Mussolini forced the region to become totally Italian. Hitler, of course, wanted this area to be part of the German Reich.

So, the “Option” was devised where the South Tyroleans could either emigrate to Austria as part of Hitler’s Nazi Party or remain in Italy and lose their culture under Mussolini’s fascism. A lose-lose scenario lasting from 1939-1943.

Trentino, being further south in Italy, has escaped this tension especially since the majority of their inhabitants speak Italian.

However, with nationalism turning many countries into pockets of isolation, let’s hope this Euroregion can work through this issue without disrupting the existing cooperation among its citizens.

In driving to our destination in Kastelbel we noticed row after row of vineyards.

But, those vines suspiciously are holding mighty big grapes. Which, in peering more closely we realized were apples… 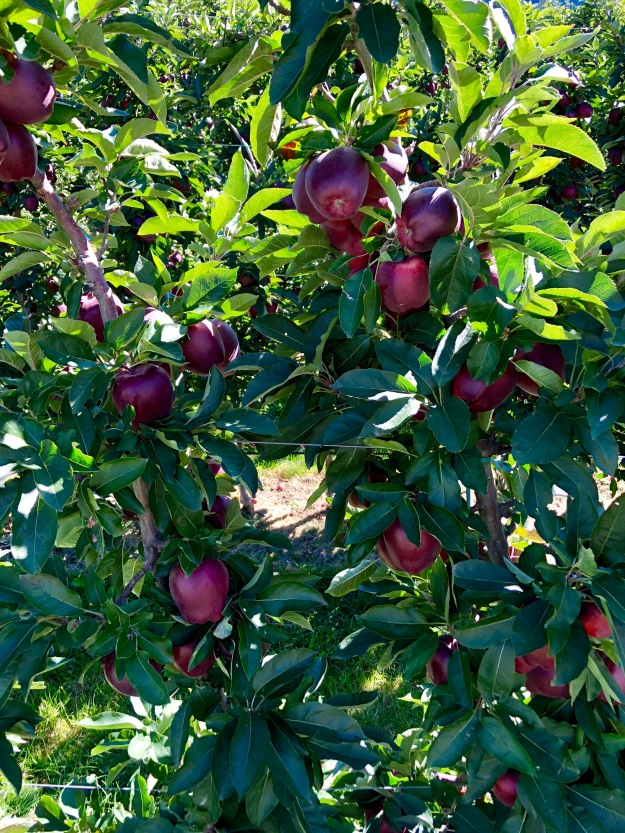 We later found out every 10th apple in Europe comes from this area. And, I have to say, they grew some good apples :)

We arrived at a lovely hotel Jürgen found for us when the Agri-Tourismo one he recommended had no vacancies. We highly recommend Hotel Panorama not only for its warm and helpful family, beginning with Christian, but also for its meals included in the room price (breakfast and dinner).

When we checked in they said fish was the main entree that night. Expecting a typical buffet of soggy food sitting under warming lights, the actual meal of delicate and delicious fillet accompanied by a starter and salad then finished with a dessert stunned us. We now knew not to be late for the 6:30-7:00pm serving time. And, the breakfasts were just as marvelous in their freshness and tastiness. And, the coffee was glorious.

Furthermore our room was Scandinavian airy and comfortable with a shower to die for. If you want to make a boating woman supremely happy, give her a shower that doesn’t cut off after three to five minutes, water hotter than tepid temps, and pressure that won’t leave half the shampoo on the head. Yes, I was happy!

But, beyond that the Dolomites we experienced both in drives and walks offered a completely different mountainscape. 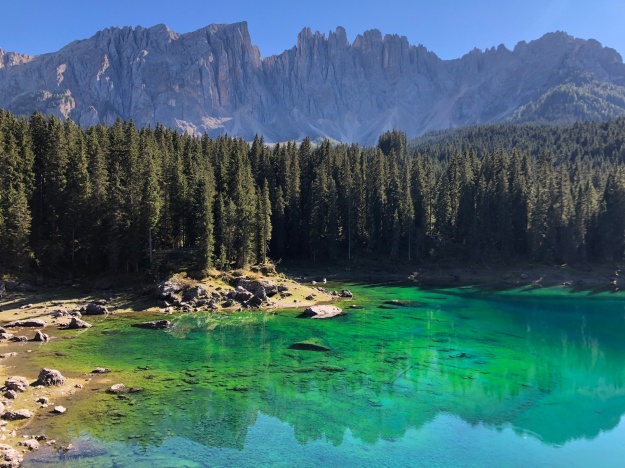 And captured views of the Dolomites– 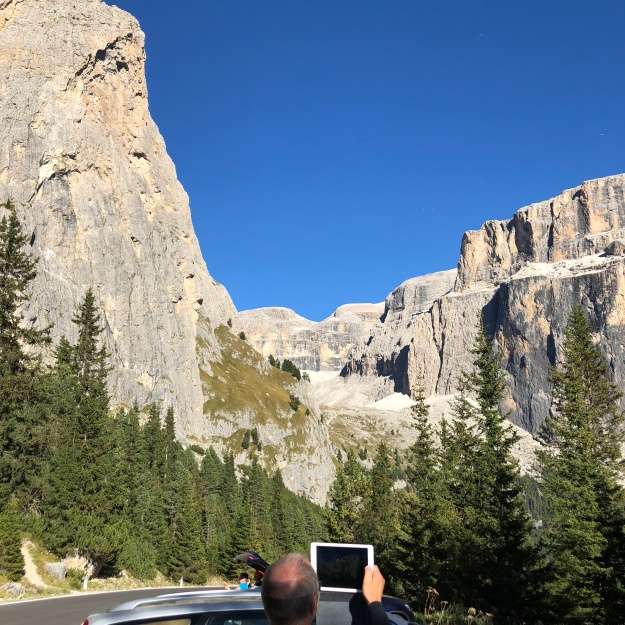 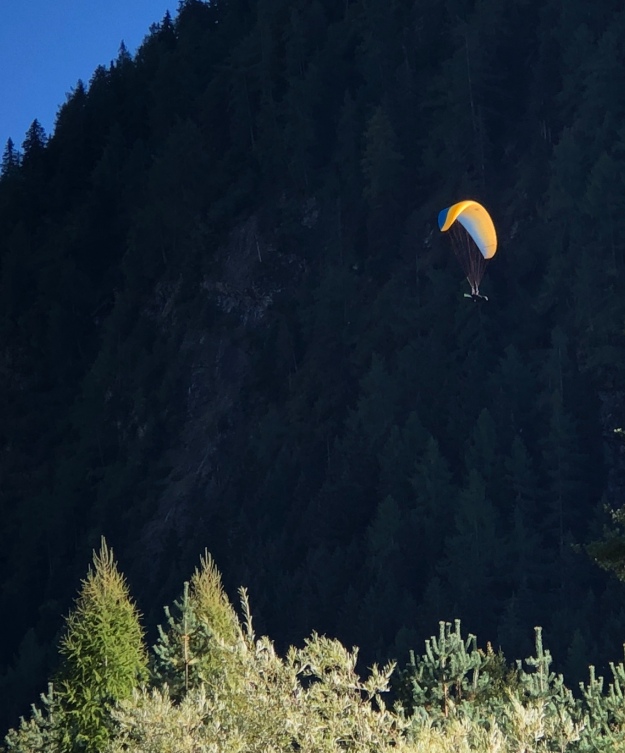 We set off for the capital of South Tyrol, Bolzano (where the iceman, Ötzi, lives††) and the Renon plateau, an area offering lots of hikes and scenic options. Having located the cable car for a ride up to Collabo (in German, Klobenstein as every place is in both Italian and German) we began our task of sussing out a hiking trail. As we peered at one of those glossy-page folding maps trying to understand where we wanted to go this kind couple approached us. If you ever see someone looking a bit lost while staring intently at a map, one of the nicest things you can do is ask if they need help! That’s how we met Anna and Alois Frisch, a couple from Germany who were visiting one of their favorite areas.

They took us under their wings, ensuring we got on the Renon Train, South Tyrol’s only narrow gauge railway with powered cars from 1907. Disembarking, we followed them to a bus stop in the small village of Longomoso. We then decided, due to time constraints, to skip the next step of taking a bus to a higher hiking ground.

†† On the Austrian-Italian border at 10,530 ft. Two hikers discovered his mummified body September 1991 in the Ötzi Mountains. The Italians claimed it after a survey established it laid just over 100 yards on their side. Unfortunately, we didn’t see him as this fits perfectly with in the category of an MDT (Max Disaster Tour).

We then headed off to do an hour loop, one marked with letter excerpts written to or from Sigmund Freud (1856-1939). Which seemed odd until we read he had spent the summer of 1911 in this area.

This was my type of an afternoon hike:  few inclines, well-marked paths, and plenty of open spaces with warm sunshine. 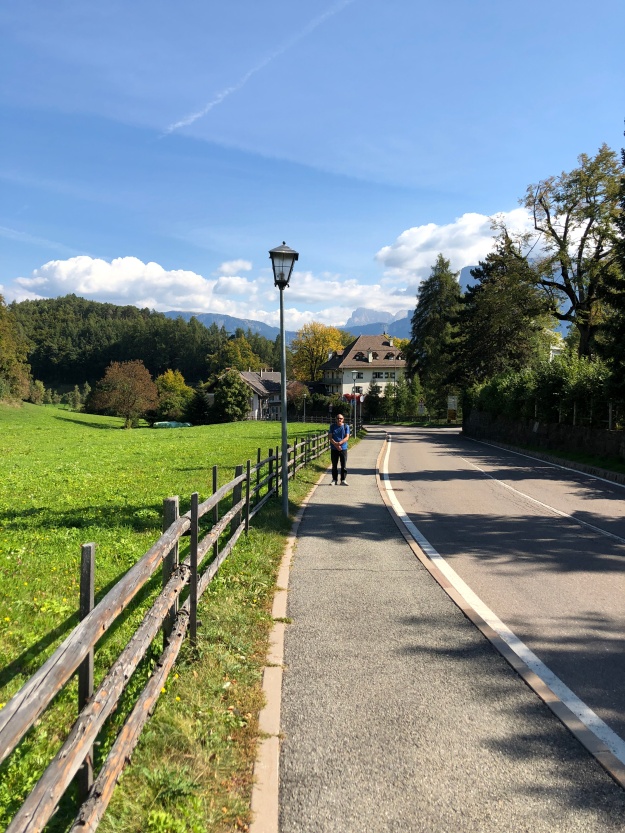 Oh, and a few resting stops…

And a friendly local. 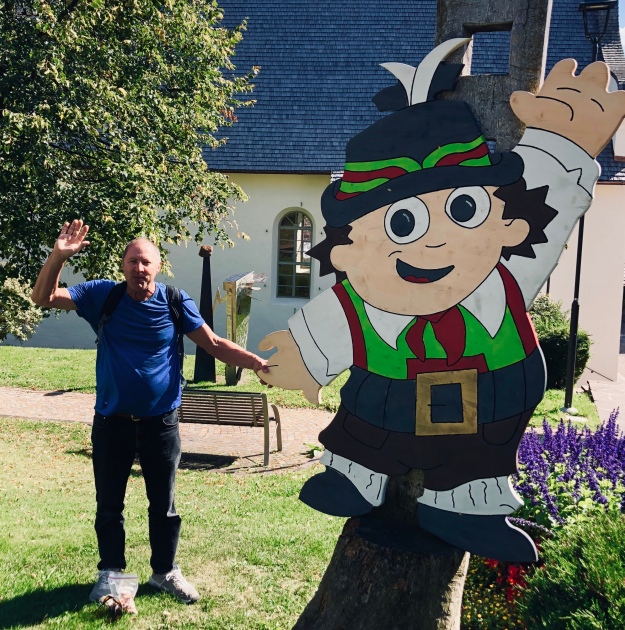 After several hours we found our way back to Bolzano and headed for another treasure in the area:  one of the six museums established by Reinhold Messner. 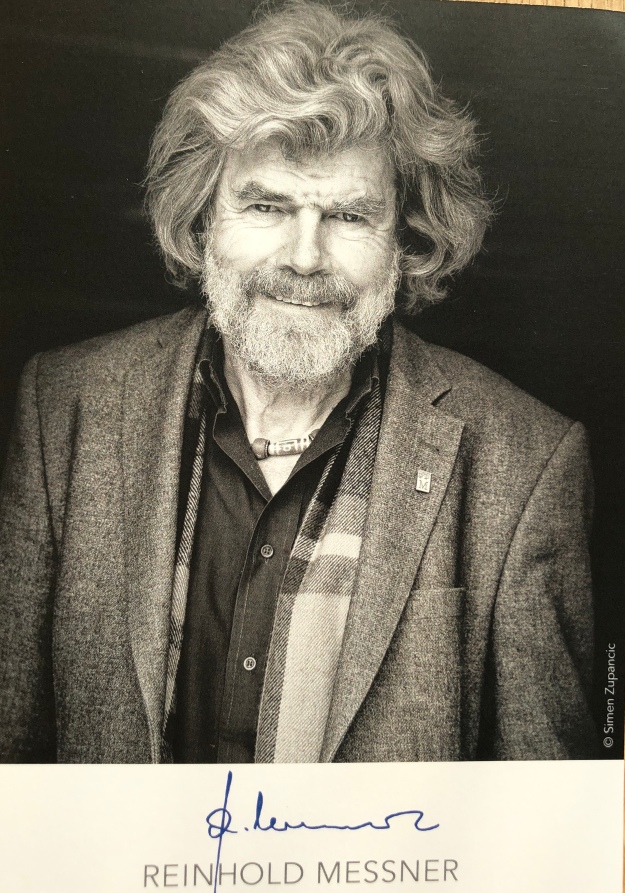 A native of South Tyrol, this mountaineer was the first in the world to climb all the earth’s peaks over 26,000 ft. If you want an extreme quick bio of this guy, Check this post out  But, please excuse the language!

Each museum presents a A facet of Messner’s passion (mountaineering) interlaced with art,  and each museum locale is reason enough to visit even if you’re not interested in mountains or art. The one outside Bolzano is a repurposed castle, 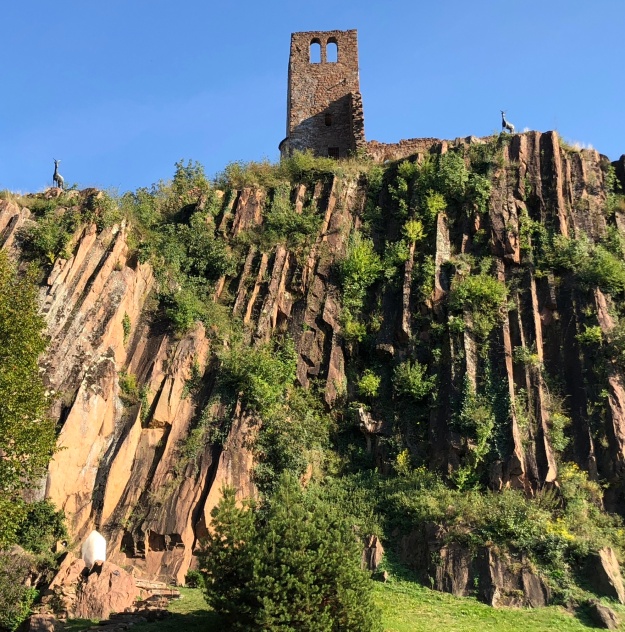 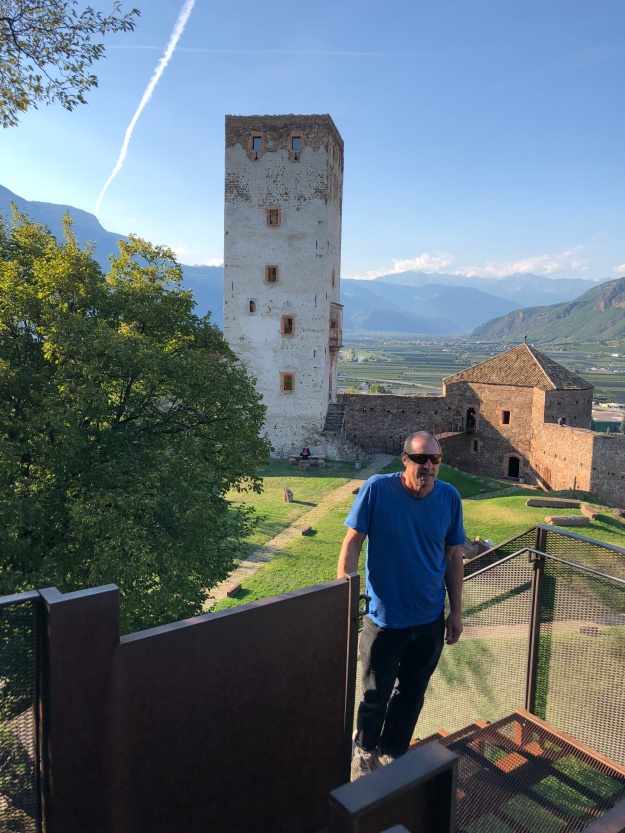 Unfortunately, we had hit this museum at the end of the day so we scampered up and down stairs (that tested my fear of heights) 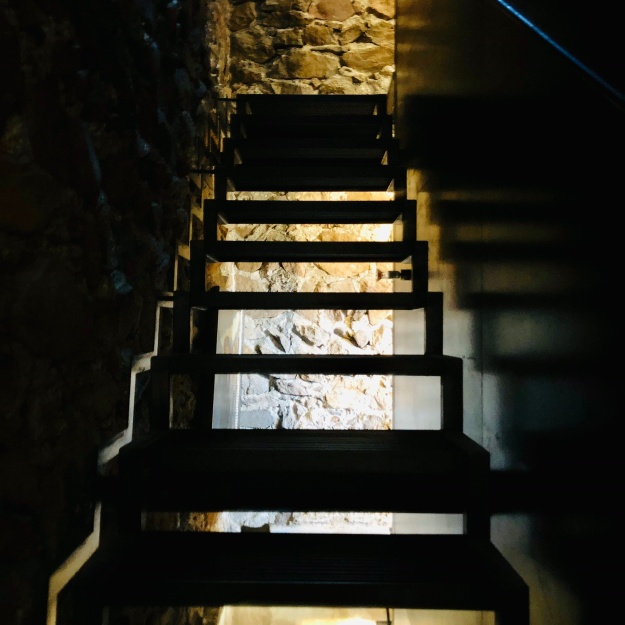 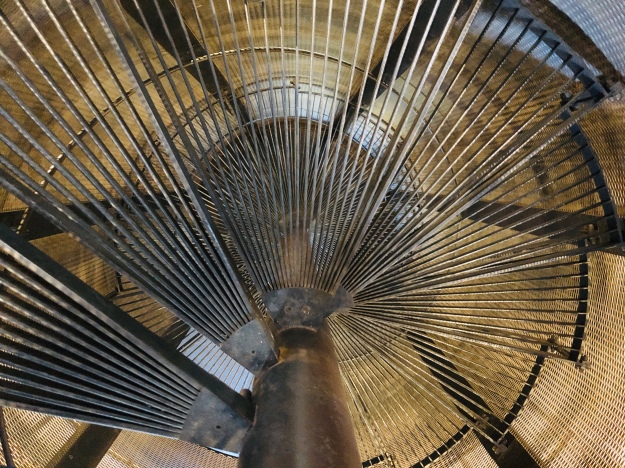 And enjoyed the various sculptures scattered throughout the grounds. 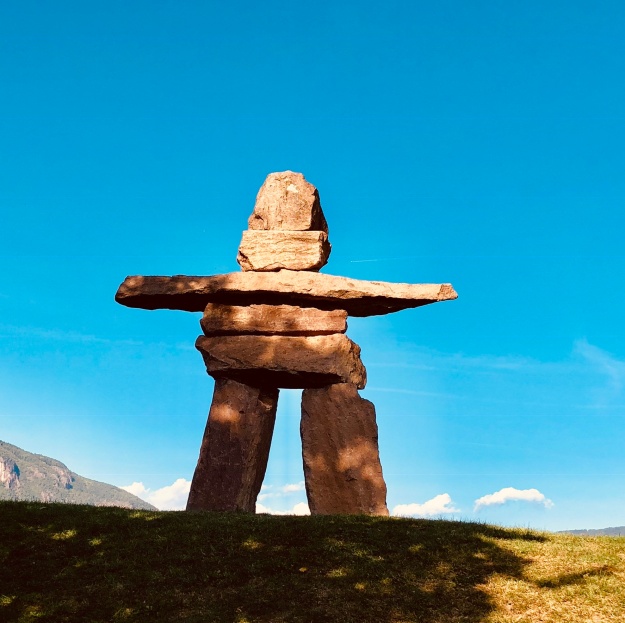 After exploring this Messner Mountain Museum we added the other four onto our ‘to do’ list for future road trips.

Back in our room that night we discovered one reason why Anna and Alois knew the routes so well:  he writes Guidebooks . Another wonderful connection. And, another example why it’s the people we meet in the places we go that make our voyage so heart-warming memorable.

We left South Tyrol via the Timmelsjoch High Alpine Road. It seemed fitting that our exit provided more stunning views.

And, for me, the scariest. The road is open from 7:00am to 8:00pm beginning end of May to end of October (depending when winter decides to end and begin). Some informational stops along the way provided historical tidbits in artistic buildings,

such as the use of the road as a smuggling route. The photo below shows a wooden ‘backpack’ used to transport goods in a ten-hour or more crossing.

Not only cars but motorcycles zoomed by us, sometimes a seemingly non-ending streak of them. Which made sense when we discovered Timmelsjoch proudly hosts the ‘highest-located motorcycle museum in Europe’.

With non-existent guard rails in some of the highest places (unless you count some wooden stakes spaced fifteen feet apart…),

we (royal ‘we’ as Max was the only driver on the rental) managed to exit Italy and enter Austria without any mishap. Except for Max performing his wall pose.