Back in Swedish Waters

Leaving the Åland Islands we traded one archipelago for another as we sailed the 36 miles back to Swedish waters, with a decent wind and a few rocks to watch out for, such as the one shown on our chart plotter, 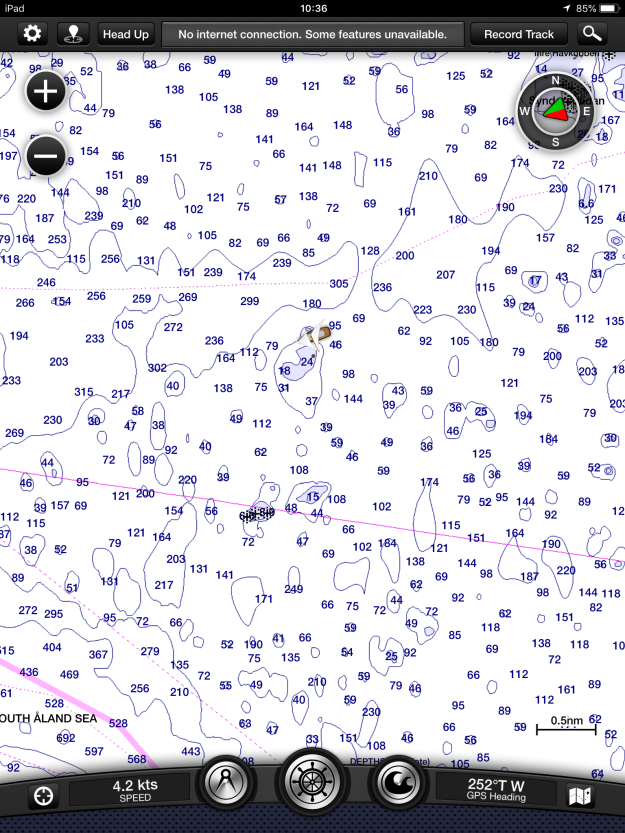 JUANONA returned to the Stockholm Archipelago.

With plenty of days (and nights if need be) we began making our way to another anticipated event, one we’d been planning part of our summer cruising around: the August 18 wedding of friends Nina and Peter in Copenhagen.

After ensuring our wheel of cheese would survive another month or two, 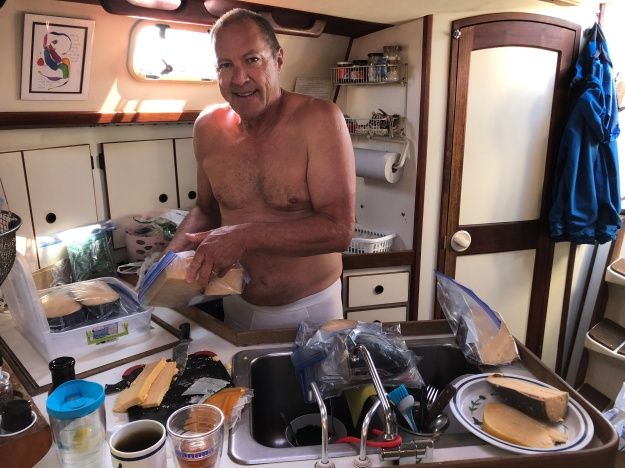 We hop-scotched down the islands with one-night stops… 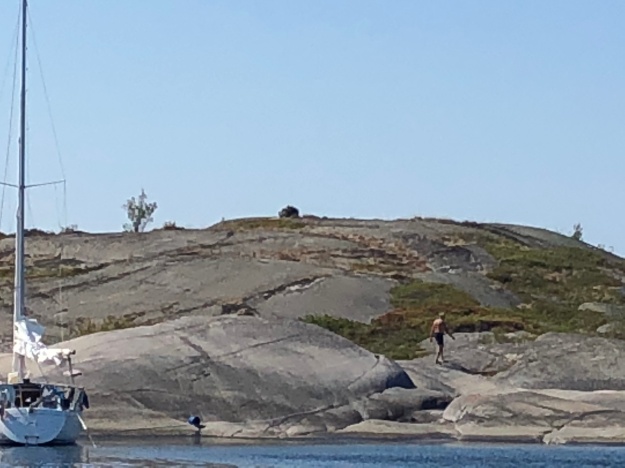 Then Langviksskar and its familial onshore activities thanks to a highly sought-out beach, 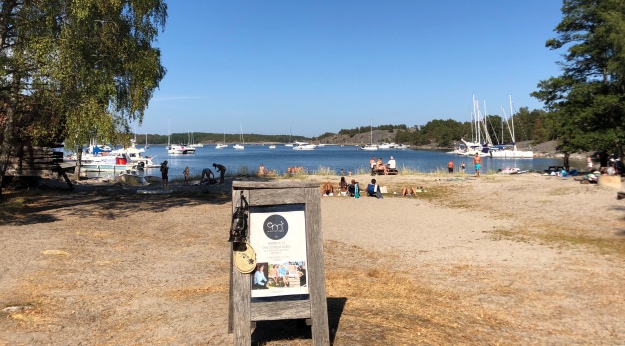 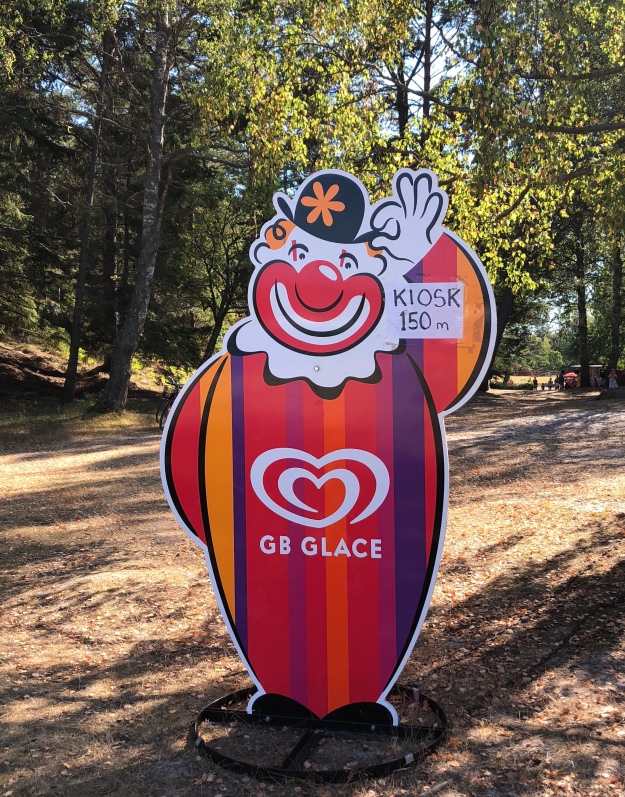 and a convenience store (run by a nice young man whose winter destination will be taking his family to Florida since he’s working his summer vacation). 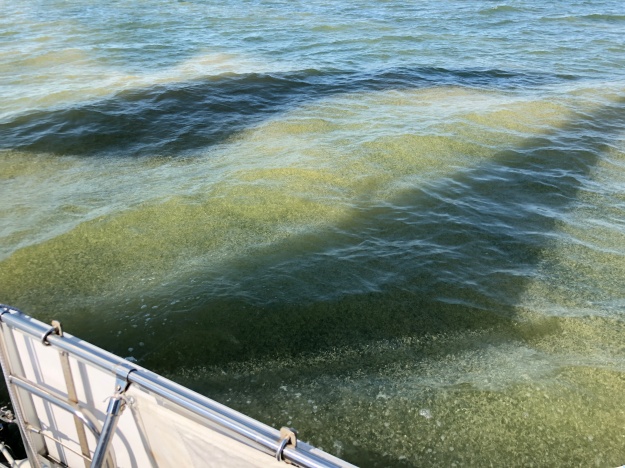 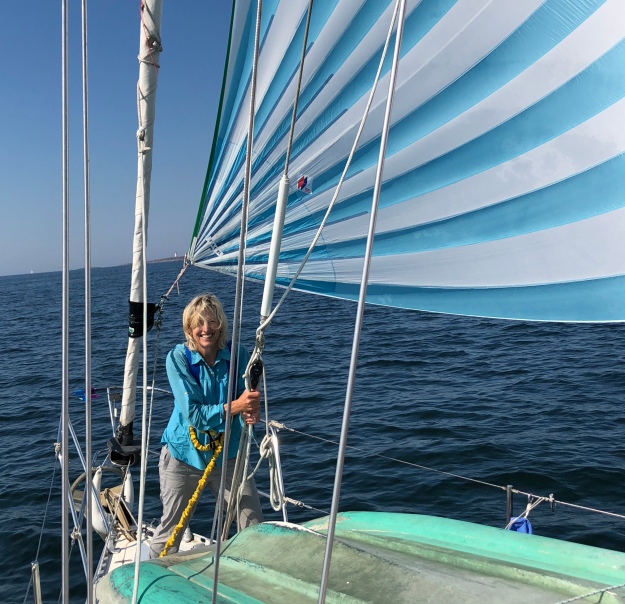 where our two-boat anchorage in May had expanded to 26 boats in July.

Not until we carefully maneuvered through shallow, unbuoyed channels of Eko did we find ourselves the only ones dropping anchor amidst a cluster of islands. With the exception of a camping family on a far shore JUANONA and her crew had a sense of privacy not felt since Stora Nassa.

Here we frolicked in jelly-fish-free waters for refreshment, 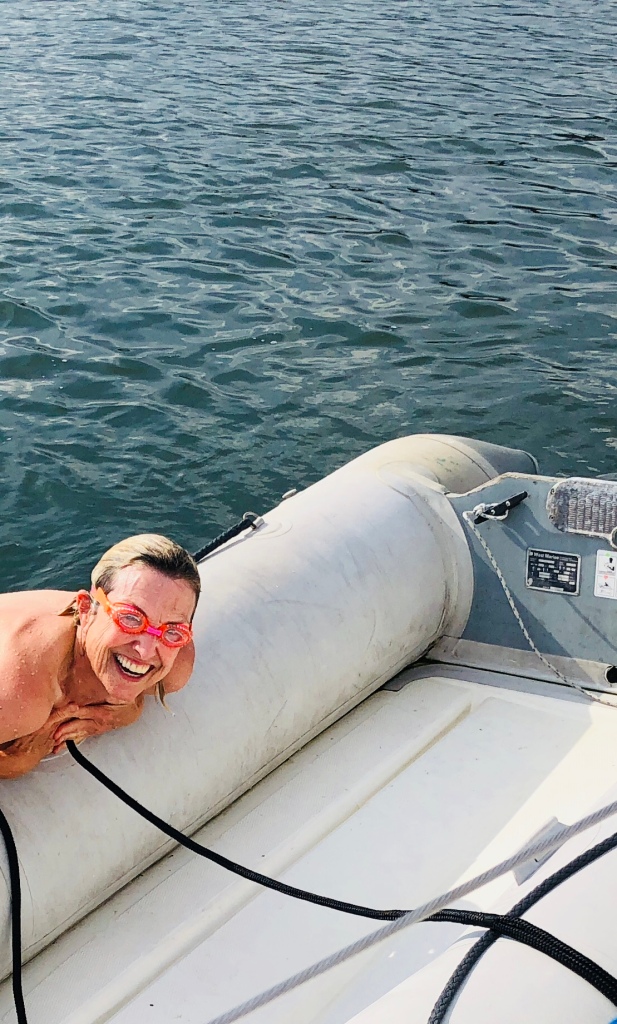 Attended to some boat tasks, 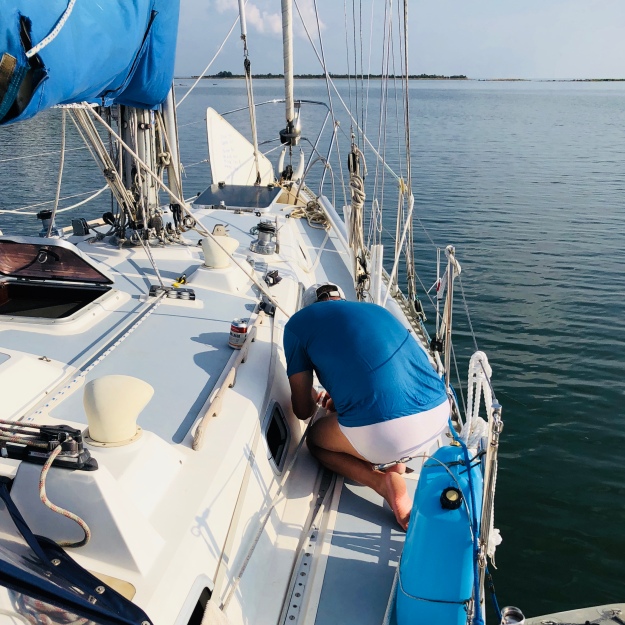 Washed some necessities (and, if you note the difference between male and female undergarments, you’ll see a gender distinction on hygiene…), 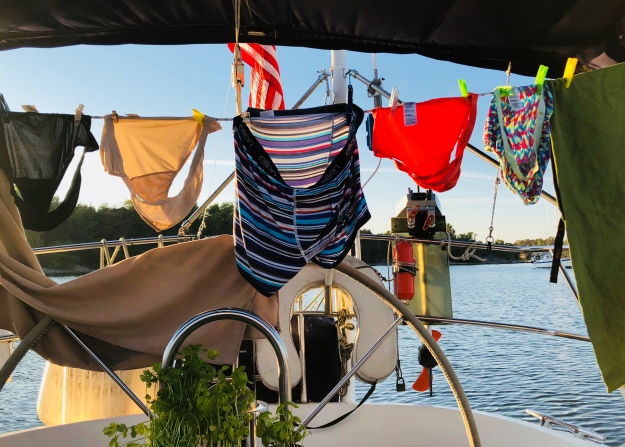 And reviled in the simplicity and privilege of cruising life… 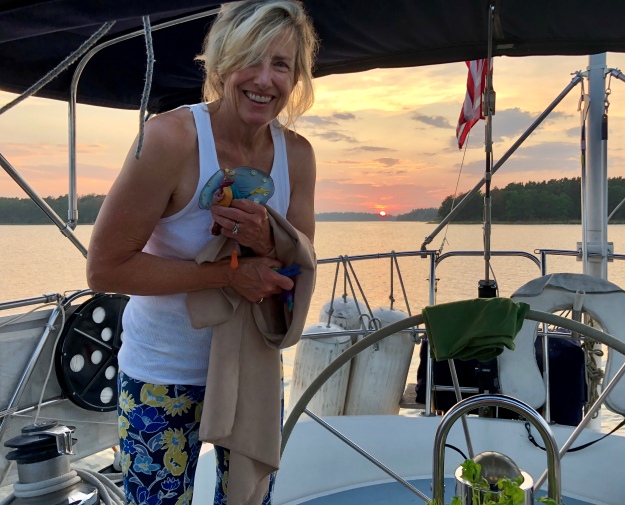 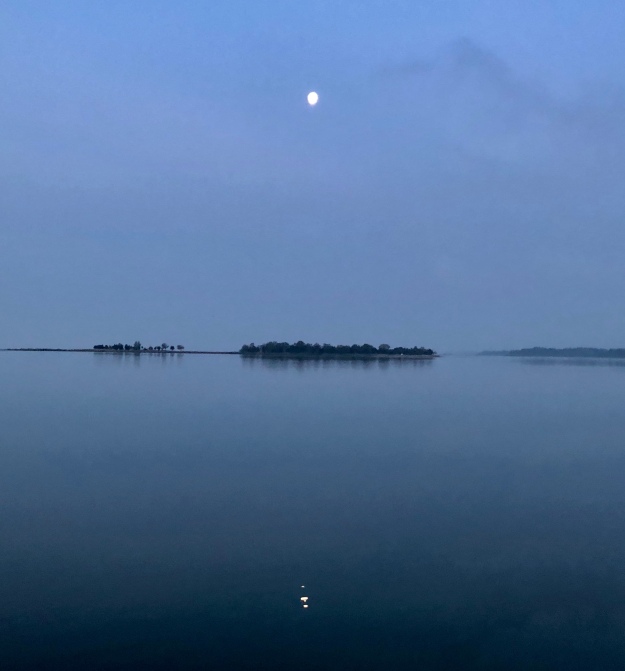 and sun rising witnessed by Max. 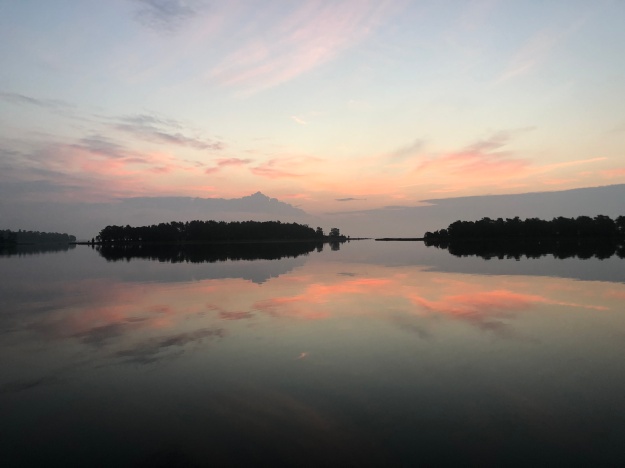 With the unusual continuation of hot skies and a dearth of rain-relief, our motor-cruising south brought surreal photo opportunities, 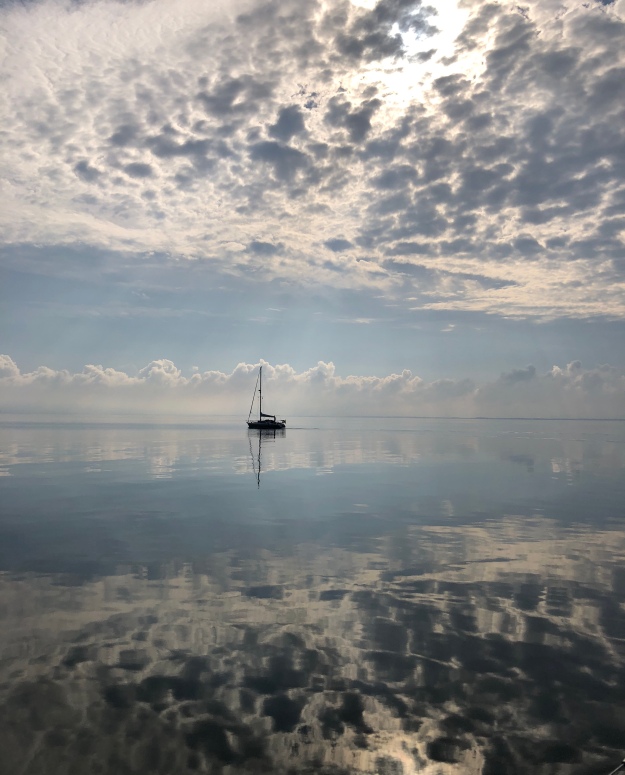 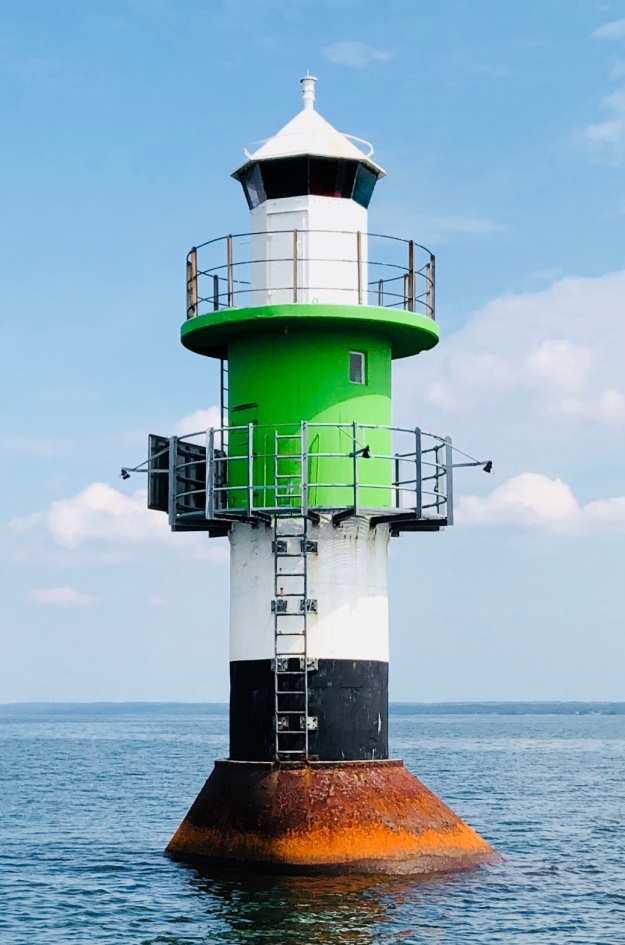 And a covering of everything by hatching gnats, fortunately, the non-feasting kind. 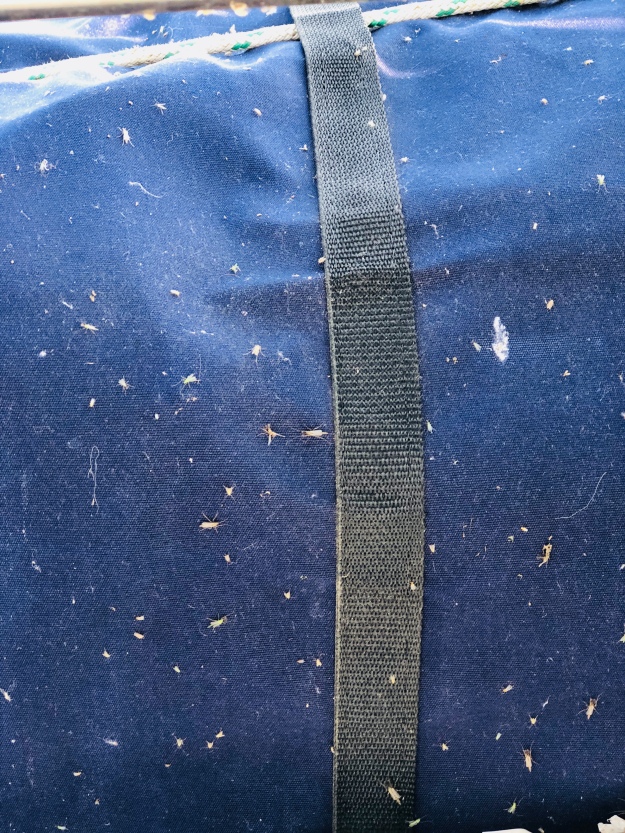 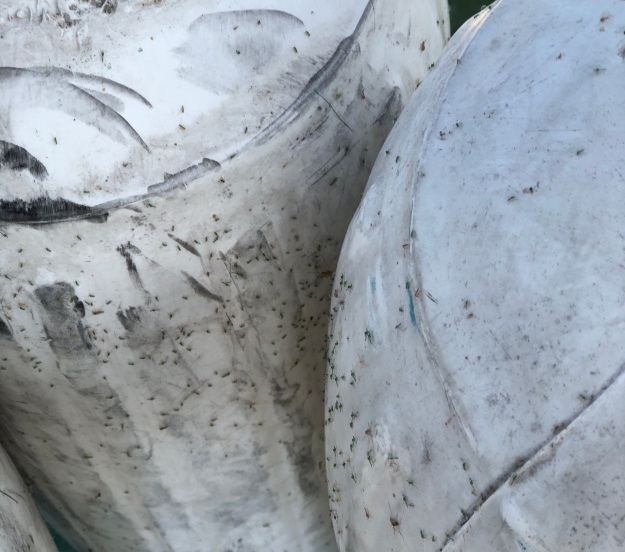 Needing supplies and a laundry (for bigger items) we opted for Farjestaden, a port halfway down the west coast of Oland. This city serves as an excellent reprovisioning alternative if one wants to avoid the popular and much larger metropolitan Kalmar. Connected by a 3-mile long bridge to Farjestaden, Kalmar boasts an impressive castle and a maritime museum, both of which we had visited mid-May when heading north. Well worth a visit, not the least due to an excellent chandlery, but at this point we were seeking a more tranquil setting, and Farjestaden fit the bill perfectly.

With a grocery store close by, free laundry (yea!), friendly boaters, and an easy berth thanks to floating booms on either side versus med-mooring, we docked, did our errands and then rewarded ourselves with a family-size pizza dinner… 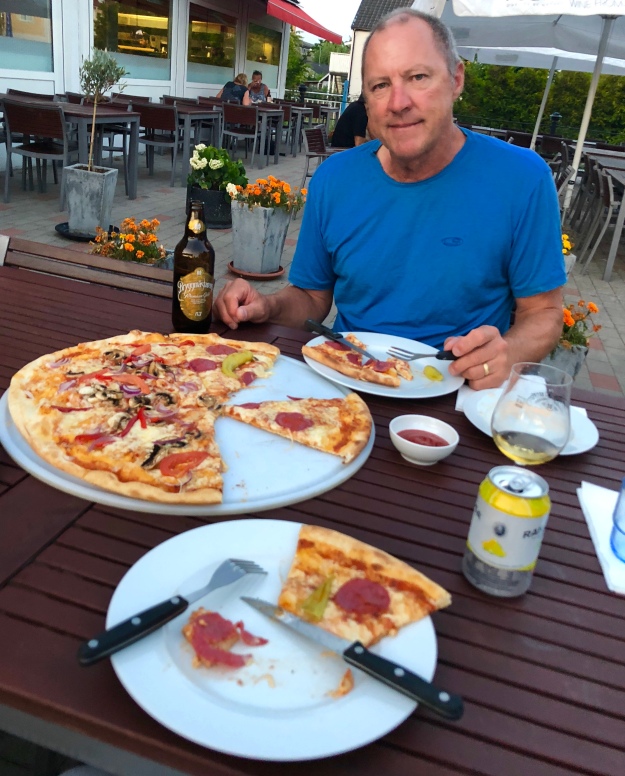 That should have been labeled ‘pizza-for-at-least-two-adults-and-three-hungry-kids’ or ‘pizza-for-gluttons’ size. However, leftovers meant no need for making lunch the next day. As far as I was concerned, one can never have too much of this one-dish meal, so bring it on.

Besides the pizza we enjoyed a conversation with some guys who appeared comfortably established in a corner of the outdoor seating. Turned out the group consisted of two fathers and sons. We couldn’t begin to correctly pronounce their names (much less spell them) but the love this family shared for one another was like a beacon.

The fathers hailed from Albania, and our talk ranged from emigrating to Sweden to the importance of making one’s own way to taxation that serves the people not the rulers to ‘yes, that’s a humongous pizza you ordered’.

We photo-captured three of them before we left. If the forecasted favorable winds didn’t materialize the next morning, we told them we’d be back for more conversation.

It was in Farjestaden we first learned of an oil spill that had occurred close to the beautiful island of Harstena around the time we had sailed there. Max heard various rumors that the Captain was drunk, and another that he was navigating dangerously close to the coast in order to get a better cell phone signal. The Swedish Coast Guard has apparently contained the spill.

Continuing south we anchored in a wild roadstead inside a little islet named Trotten. A line of rocks and islets formed a barrier to the sea on the other side.
Deciding to explore a bit we took off in the dinghy only to realize as we neared the shore we had neglected to bring the oars.

Avoiding those gelatin blobs Max pulled us on (my hero) 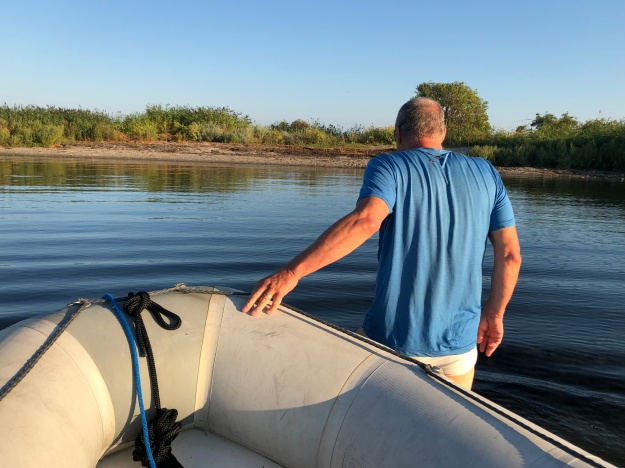 And contemplated a quick dip. Not me, thank you very much. 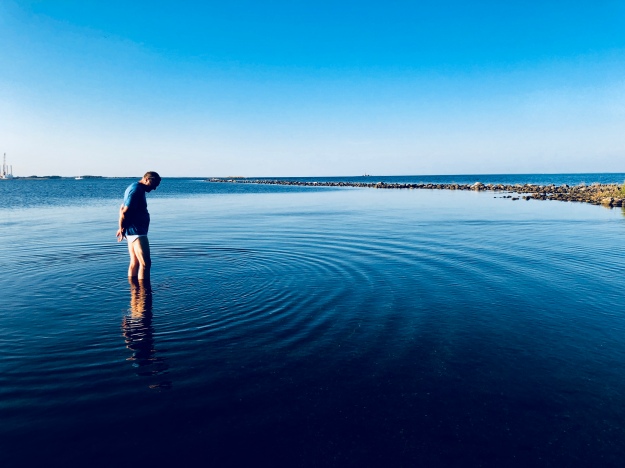 We later noticed what we had thought was a large building was actually moving. Mesmerized we watched as the huge mechanical box following a tug boat sluggishly made its way out of a harbor less than a mile north of us.

Thinking the tug was pulling it we realized no, this platform was self-propelled and heading to service a nearby wind farm. A fascinating sight, and, if you haven’t noticed by now, what may appear mundane or boring easily becomes entertainment for two people floating on a boat…

Continuing on to anothet anchorage in Flakskar, one ringed by low rocky islands, Max beat the heat with a dip 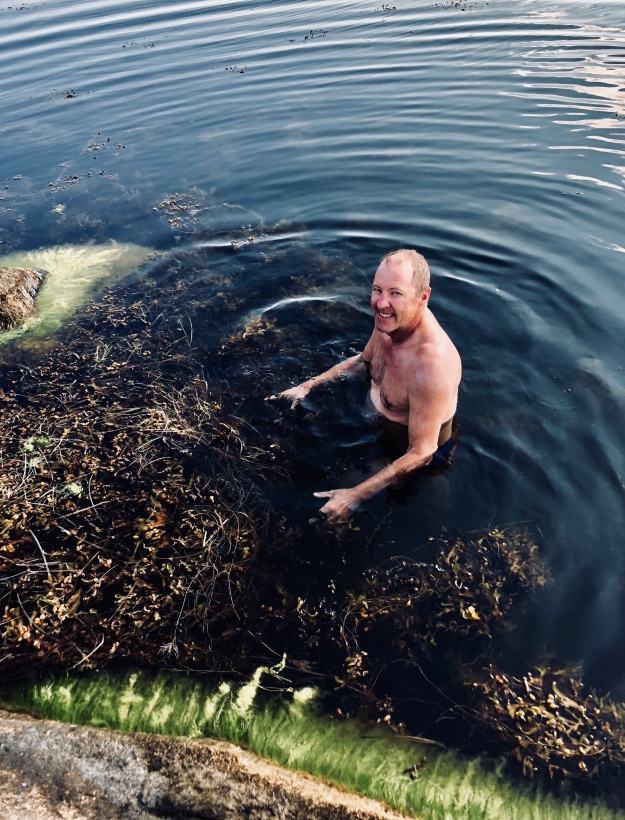 while I settled for a deck perch. 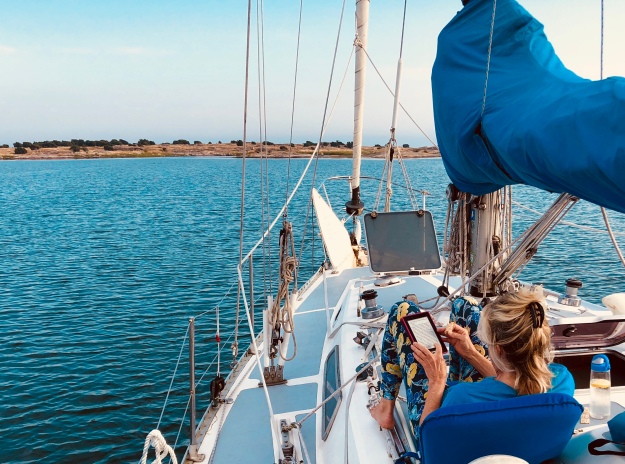 With a morning start, JUANONA up anchored following the heat south after a lovely and swimable week of cruising in Sweden.

Next, another gem of an island…