We are so lucky! Our Ipswich friend Anne, a fellow cruiser now in Cartegna with husband Peter, arrived with no problem and she woke to a picture-perfect day in the Netherlands :).

With sun out and wheels at hand we ventured off to Friesland, the northeast province of the Netherlands. Max and I sailed there summer 2016 on our way to and from Norway. When cruising there last July we had taken advantage of traveling via bikes and trains. This time the three of us traversed the IJsselmeer in our rental car via the famous barrier dyke, the Afsluitdijk, landing in Harlingen where we had last been with JUANONA almost a year ago.

Oddly enough we spotted a creature not usually seen in the Netherlands, or, for that matter, in most European countries.

Why it was there, who knows, but it made for an exclamation and a ‘what-the-hell’ head scratch.

For the first time in a while we could enjoy a coffee outdoors, 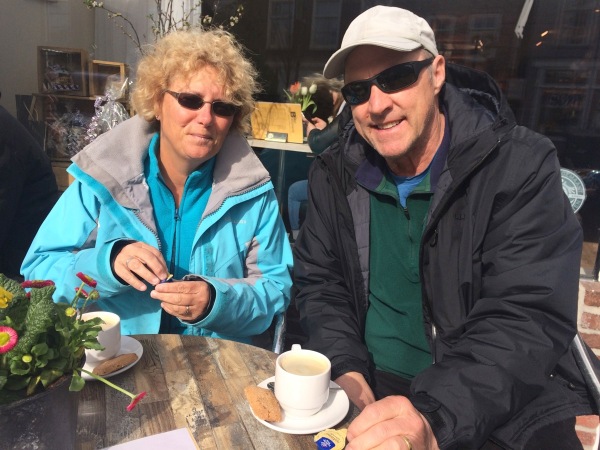 then managed to visit a Norwegian sail-training ship alongside one of Harlingen’s quays with very personable trainees aboard.

From there a clockwise drive took us along polders and acres of farmland along roads made for teeny cars. Believe it or not, the lane below is two-way, and this was the case for many of our back-country drives.

Out of all the towns we visited Dokkum was the highlight with its working windmill. Our friends Gus and Helen had stopped here in their Sabre 38 and tied up in front of one of the windmills. Unfortunately our draft is too deep to easily travel these particular canals, which is why we decided to visit by car. We purchased mustard ground there… and, I took a shot capturing the ‘windblown look’ at the top of the mill. Behind you get a glimpse of the picturesque setting where we strolled soon after. 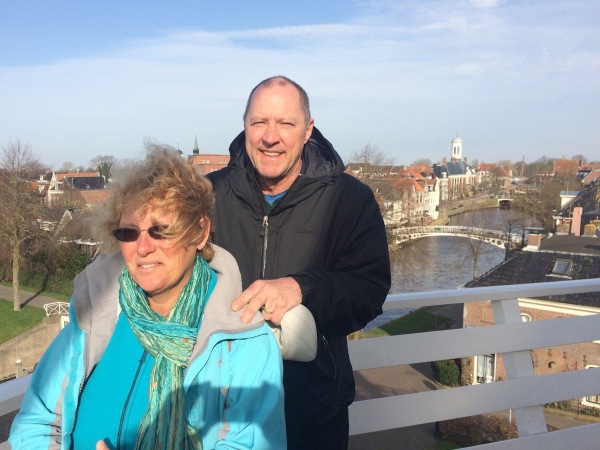 A local restaurant recommended by the windmill operator served up excellent kibbeling (fried cod) for lunch before we hopped back in the car to continue our circular route. 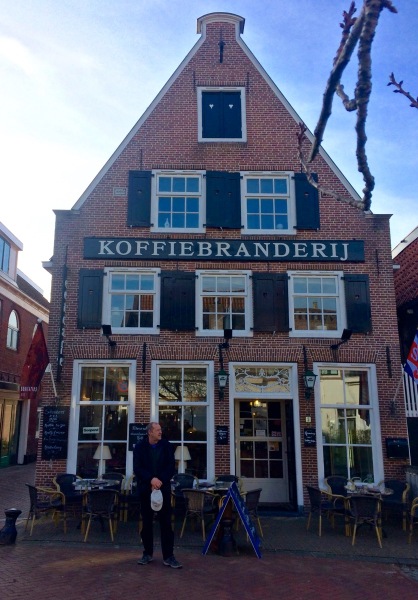 Our Sunday drive, which included Holwerd and a drive-by of Sneek, provided Anne with a feeling for this part of the Netherlands, often missed if one isn’t heading northeast of Amsterdam.

We could have expanded our trip to visit Hindeloopen, a lovely little port where we stayed end of last July, but our stomachs were starting to grumble for dinner. If you thought all we did was drive from one refreshment to the next, you wouldn’t be far off…

The one and only time Anne had been in Amsterdam was as a baby, so she and I trained down to explore this canal-ringed city. All I can say is we walked and talked, and talked and walked, interspersed with coffees of course. 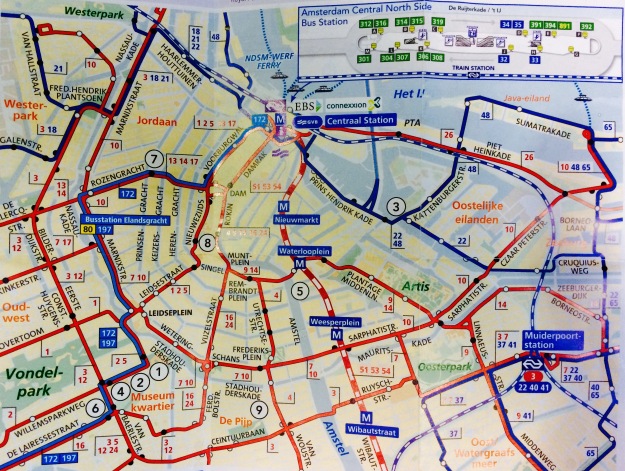 The day being sunny and not too crowded with tourists, with the exception of school groups, we ended up doing a counter-clockwise tour of the city. Thankfully, Anne’s navigation skills came in handy as I became completely turned around when approaching the Museumplein from the opposite direction. But, since Amsterdam’s streets are fascinating anyhow, no matter. At least that’s what I told Anne and myself.

Poking into shops, stopping for a lunch at the Rijks Museum cafe, and just experiencing being in a lovely urban culture was enough for both of us. By the time late afternoon rolled around we were both ready for home and one of Max’s meals, a great way to end any day.

Another day of exploring before we had to drop Anne off in Eindhoven. And, another glorious day of sun, so we drove south to Waterland, located between Hoorn and Amsterdam. Allegedly this area provided the grid-layout of Manhattan in New Amsterdam when the Dutch settled there in the 1600s. By the way, If anyone is interested in how the Dutch established Manhattan’s culture, and its continuing influence today, read THE ISLAND IN THE CENTER OF THE WORLD by Russell Shorto. Max enjoyed it and passed it on to me. The information is not what we get in our history books, possibly because the Dutch (or the Native Americans) didn’t write the history of this area.

Our first stop set a high standard. Di Rijp enchants any visitor with its storybook streets and homes. And, it definitely felt well-taken care of. But, first, the regular stop:  our koffie break.

It was at the cafe that Anne noticed a whaling mural. When we asked about it, the owner said the inland town used to front the ocean, and had been a major port with ships sailing regularly to Spitsbergen. FYI: as per the Rijks Museum about a display we saw last year:  “In 1980 archaeologists investigated the graves of 185 Dutchmen – whale hunters and workmen of the train oil refineries – who had died on or near Spitsbergen during the 17th century. The skeletons were still wearing their knitted woollen caps. Each cap was individualized; the men recognized one another only by the pattern of stripes on the caps. The men were bundled up so tightly against the fierce cold that only their eyes were visible.”.

Who would have thought it?

The cafe owner mentioned a whaling museum, which we tried to see, but it was closed until later this spring. Yet, like in most of these Dutch villages, just slowly slowly ambulating down the bricked lanes peering at and in houses through their un-curtained windows provides entertainment. Oh, yeah, and having your photo taken next to an old lock :) 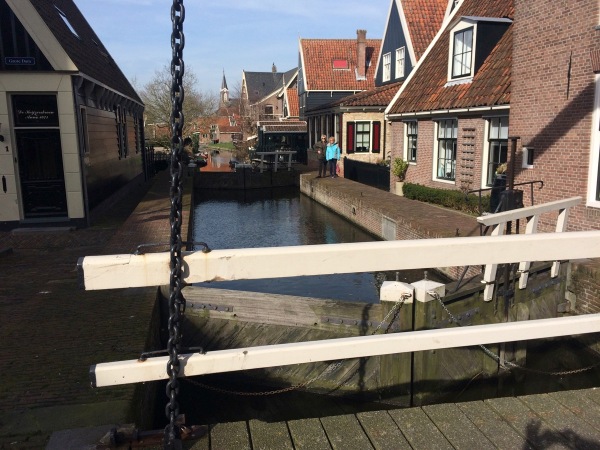 Monnickendam, established by the Benedictines in the 14th century, was our lunch spot. This also use to be a major port but now you see more pleasure craft than trawlers berthed at the local marina.

Max had been here before in search of a boat part, and the Tourist Office had given him a map of the gable stones adorning many of the old homes. These plaques identified the owner by trade, interest, or family name. As we walked down the streets we searched the brick facades matching the stones with the brochure’s description:

The Golden Hand:  hewn by the current owner of the house, the hand represents the “Golden Hand of God” with the palm holding the initials of his beloved.

Pirate ships:  This one dates from 1763. Pieter Winkes changed from captaining a pirate ship in the West Indies to inspecting the Het Lanselvaare, one of the local, rope-making yards. The reason? To care for his sick wife who took ill while he was sailing.

And, this one tells of the five Jews grocers Leo and Lies Hordijk hid during WWII. Fortunately, all survived.

it’s never surprising but always welcomed when a local stops to ask if we need help. This time our impromptu guide informed us of the 17th-century glockenspiel in the former town hall (from the 15th century). He mentioned the bells were a little off tune (he couldn’t tell and we didn’t care) but in ten minutes some horses would come out and the angels would sound their trumpets. Sure enough, we heard the bells

and then we saw the hooves of the prancing horses with the angels tooting.

Our last waterland town was known for its 17th and 18th wooden houses, some painted a specific grey called ‘Broecker grijs’ like the one in the photo I pulled off the Internet. Interestingly this color, they say, came from the landscapes painted by Monet and other artists. I haven’t found any other reference to that, though.

Broeck of Waterland (there’s also a Broek op Langedijk further north, which we visited last fall) is known for its cleanliness but, frankly, all of these places look spick-’n-span to me. (Actually, throughout our touring of the Netherlands this past year, litter seems to be just a sprinkle of trash every now and then versus a widespread occurrence.)

We needed to head south for Anne’s flight so this was our last stop in our tour of Waterland. Must say, it’d be great to do a bike trip around here. Of course koffie stops would figure prominently…

Seeing a friend off is always a bit sad, but she promised to keep in touch regarding her and Peter’s cruising plans. They’re headed into the Mediterranean. Hopefully, more reunions are our in our future!

One more ‘Bits and Bobs’ on its way…