A wonderful surprise came by email in October. Some friends from Maine were heading to our neck of the world and would be visiting Amsterdam beginning October 28. Not only were we going to be in the Netherlands but also in Amsterdam for an appointment on that very day.

Arranging to meet at a cafe in the Rijksmuseum we managed to find one another quickly and hugs abound. 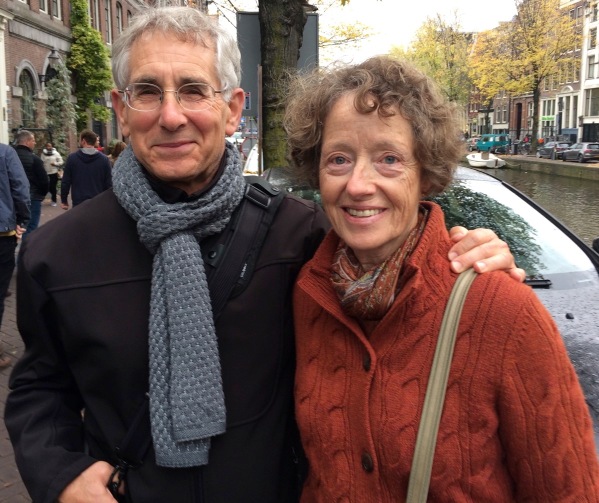 Marcia and Steve are inveterate travelers and generally rent apartments while immersing themselves in the culture and everyday-doings of the local inhabitants. We’ve corresponded with them on several trips, exchanging information on various destinations. Since they had just hopped off the plane and checked into their airbnb accommodations mid-morning, we all decided to stretch our legs while locating a place for lunch. Which we did find while walking and talking and dodging the ubiquitous cyclists.

After lunch we strolled back towards the train station, taking them through the Beguinhof, the oasis we had visited the prior weekend. During our walk Marcia exclaimed that some bags hanging outside a shop were designed by a company from Massachusetts, one with which she was very familiar considering she owned at least three of their designs.

And, a backdrop providing a perfect opportunity for a photo-snap.

With some trial and error on our part (still get lost in this city) we located the Red Light District. This neighborhood surprises one because the surroundings appear like many other parts of the city until you notice what the shops are selling, and some narrow alleys that boast plate glass windows with semi-clad females posing. (Two days later they enjoyed a fabulous meal thanks to the suggestion of Deborah who used to live in Amsterdam.)

Since they’d basically been awake for 24 hours we all decided to head to our respective berths, and we parted company as they meandered their way back to their apartment and we, to the train station and Hoorn. Hoping our paths would cross again during their visit, we invited them to Hoorn; yet, with only two more days in Amsterdam (and plenty to see there) before visiting Belgium sites then ending in a favorite haunt of theirs (Paris), we at least knew we could communicate in the same time zone via email.

We bade them good-bye but not before Max took a photo documenting this reunion of Mainers.

Seeing friends from home when we’re on JUANONA is such a gift to us. With all of their traveling we hope to see Marcia and Steve again in the not-too-distant future. It’s hard to say good-bye when we just said hello.

This family of five are quite easy to have aboard being content to while away the days with talking, laughing and just catching up on everyone’s news. Max had made a delicious chili for dinner. Actually he had made two batches, the first being too spicy due to following the recipe exactly, which called for a quarter-cup (!) of chili powder. Even when cutting the hot spices more than half, it still was on the verge of scalding one’s taste buds.  But, maybe the chili gave us the impetus to play charades, a first on JUANONA.

With an empty aft berth we had asked if one of the kids would like to sleep aboard. Frieke opted to try it, and she adapted to our slow-morning tempo of waking, making coffee, then heading back to the berth for online newspaper perusing (a behavior our friends Ellen and Carter know well from when we’ve stayed with them).

After 48 hours they needed to head back to Belgium on Monday. We took a photograph before we let them go… 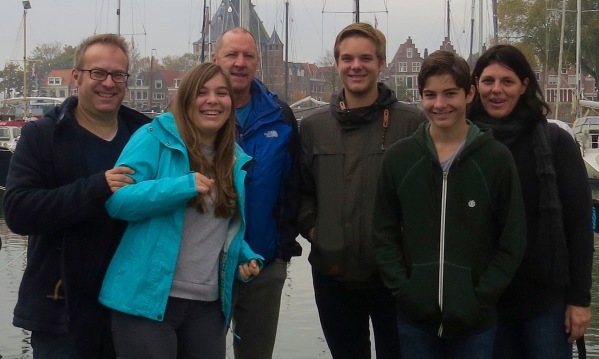 but, this time we knew our good-byes would quickly be followed by hellos due to our heading to Belgium the very next day.

As I mentioned above, we took a road trip starting Tuesday. Knowing we needed to complete another step in our application for temporary residency, we decided to combine it with, what my sister has aptly termed, “Max’s Disaster Tours” (MDTs). This tour would entail visiting three battle sites, beginning with Bastogne, a key location in WWII’s Battle of the Bulge, followed by the 1815 Battle of Waterloo, and ending with Ypres (Ieper), a site of WWI trench warfare and decimation.

Fortunately, we offset the sobering realities of horrific wars with the comfort of being with our Belgian Family in the town of Bolderberg, situated between Bastogne to the east and Waterloo and Ypres to the west.

The next morning five of us bundled into Ta and Koen’s car to head to the Bastogne War Museum, opened in March of 2014. This modern museum provided a full afternoon of immersion into one of the bloodiest and most desperate battles during WWII.

To begin your tour you’re greeted by four people who actually lived and/or fought in Bastogne:  a young boy of 13, a young woman in her early 20s, an American soldier, and a German soldier. Each subsequent event was narrated by one of the four, providing a real-life glimpse into the brutality and tragedy associated with this battle. 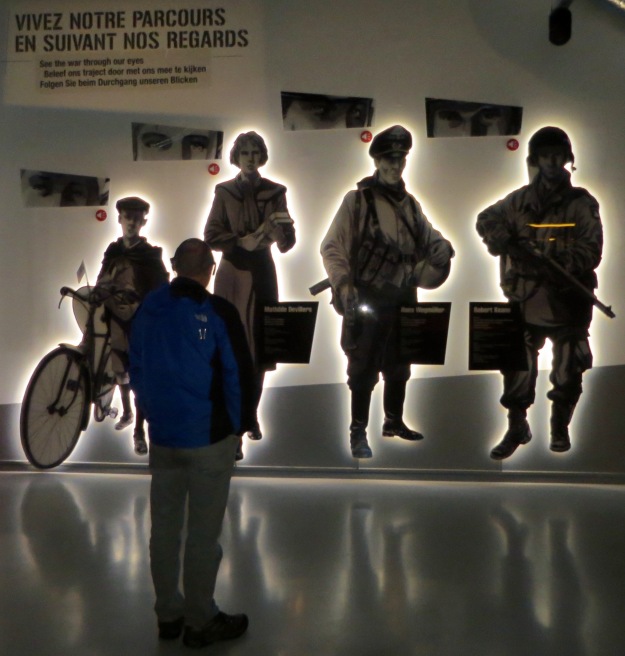 A multi-media experience awaited us with videos, narrations, photographs and text capturing our attention as we slowly toured this museum with our audio guides.

For background, Belgium was invaded by the Germans in May, 1940 with the Belgian King Leopold III (1901-1983) surrendering. He is placed under house arrest and the country begins its five years of occupation by the enemy. (FYI:  Leopold’s surrender cost him his kingship and, in 1951 he abdicated, passing the throne onto his son, Baudouin (1930-1993.)

Bastogne is located in the Ardennes forest, and on December 16, 1944 this area on the western front became the site of Germany’s last major offensive. The Germans wanted to push the American front line to northwestern Belgium and, in so doing, created a bulge, hence the name “Battle of the Bulge” (aka “Battle of the Ardennes” and “Operation Mist”).

They mounted a surprise attack but were halted by the American sector in this particular area. During three weeks of intense fighting in the fierce cold and with fewer and fewer resources, the allies defended Bastogne but not without paying a heavy price in terms of casualties (approximately 75,000). At one point Bastogne was entirely surrounded by the Germans. Which led to a famous exchange between the Germans and U.S. General McAuliffe, acting commander of the 101st Airborne Division. When asked by the Germans if he would surrender, his delivered, typed reply was:  “To the German Commander:  Nuts!  The American Commander”. Evidently there was a lot of head scratching on the German side when trying to decipher just exactly what “Nuts!” meant…

Fortunately, a change in the weather allowing air reinforcements and General Patton’s arrival from the south meant the 101st Airborne would hold onto Bastogne. By January 1945 the Americans had regained all of the ground they had previously lost in the fight.

With the pressure of waning supplies and manpower, this battle is actually the site of USA’s first, desegregated fighting troops as all soldiers were used to fight the Germans. Shamefully, it still took four more years for the military to formally end segregation. Even the willingness to sacrifice one’s life for one’s county didn’t crack the ugliness of America’s racism.

Bastogne was only one of the many towns decimated by the fighting in this area.

Residents of other Ardennes towns (Malady, Houffalize, La Roche-en-Ardenne and Saint Vith) were also caught in the crossfire of the savage and destructive warfare.

The Battle of the Bulge was instrumental in crippling Germany’s ability to continue the war. Hitler’s orders were to push through the Allies’ line in just a few days in order to reach the deep-water port of Antwerp. To do so required moving many of Germany’s soldiers and equipment from the eastern to the western front (the weakened eastern front made it easier for the Soviets to take Berlin in April 1945). Several German commanders tried to argue against such an unreasonable plan but to no avail. Subsequently, they never really recovered from the losses of troops and gear while the Americans were able to draw on more resources.

In one of the exhibits a copy of a newspaper some of you may recognize was displayed, with a map showing the bulge:

My recollection of military battles is not the best, but anyone who’s watched HBO’s excellent “Band of Brothers” series knows how this particular military engagement played out. If you haven’t seen it, do so. It’s well worth the time, and, I’ve been told, an excellent re-enactment of the actual battle. Max and I saw it a few years ago and plan on doing so again having been in one of the key sites. Frankly, it’d be worth watching again just to hear General McAuliffe’s famous exclamation :)

We actually know a veteran of this battle, Dr. Philip Sumner. I believe he has visited this area where he fought; and, it would be interesting to hear what he would say if he returned to the Ardennes.

Leaving this museum you take with you the horrors of war but also the unimaginable bravery and sacrifices individuals made, all in the hopes of making the world a safer place.

Although many died, we discovered at the end of our tour our four narrators survived.

Exiting the museum we first visited the impressive memorial, shaped in a star with the names of all 50 of the USA states carved on its pillars and walls.

Climbing a spiral staircase to the top provides a 360º panoramic view. At several points of the star, maps indicate sites where the Battle of the Bulge took place over seventy years ago.

The somberness of the war was lightened due to seeing the bronze statue created by American artist Seward Johnson. One of the four he sculpted depicting the famous victory kiss published in LIFE Magazine

was on temporary exhibit at the Bastogne War Museum. This statue illustrates perfectly the exuberance we all must feel when a war ends.

If only it had been the last one ever fought.