Before we toured another museum we opted to visit some sites generally only open on the weekends. Called “hofjes,” these former monastery gardens evolved into hospitals, inns, and refuges for orphans, widows and the elderly beginning in the 15th century with one of them still operating as such. One of the most beautiful was directly opposite JUANONA on the other side of the canal. Entering this tranquil sanctuary was a bit like stepping into a storybook courtyard. We owed the pleasure of this experience to one of Haarlem’s wealthy citizens, Pieter Teyler van der Hulst (1702-78), a Haarlem banker and a manufacturer of linens. 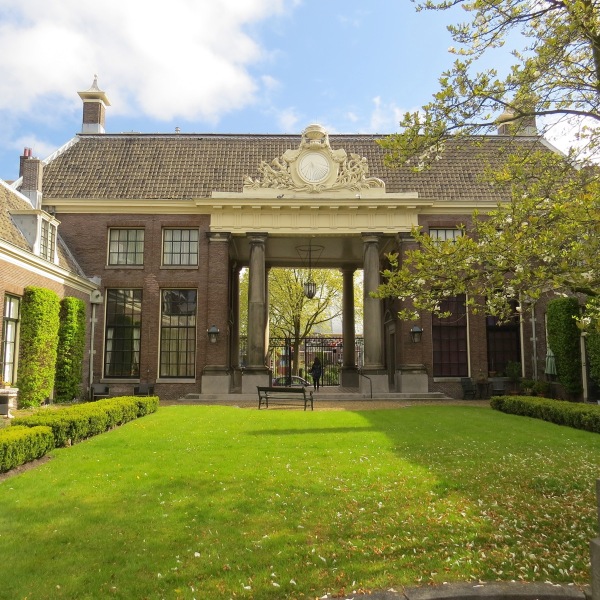 We also perused others, one of which was located next to a WWII memorial honoring Haarlem citizens who were persecuted by the Nazis. It was haunting to read the list with most names accompanied by the internment center or concentration camp where they were murdered. 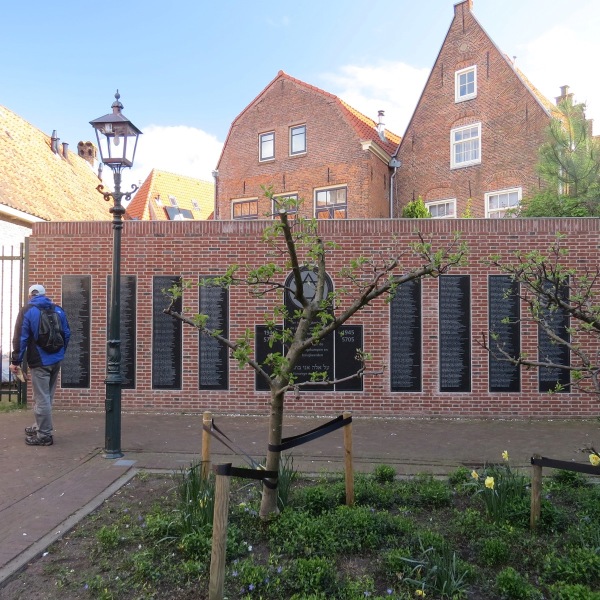 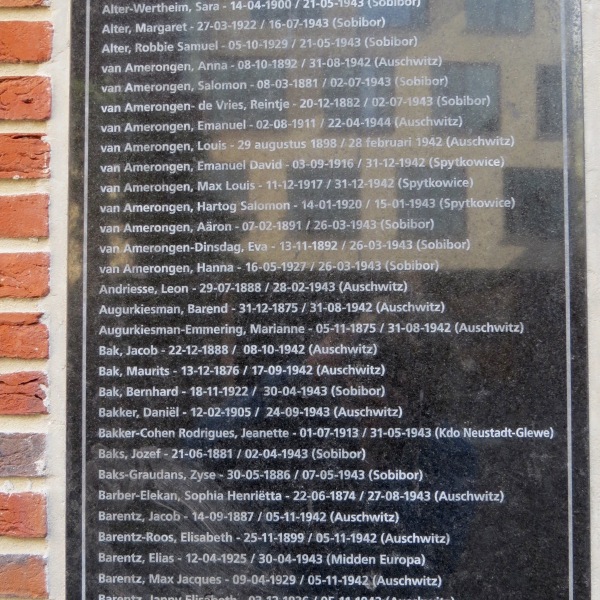 With some time to explore further we stepped into the major attraction in the town center. Named after Haarlem’s patron saint, St. Bavo’s church known as Grote Kerk or Great Church. Built in the 1200s and later rebuilt after a fire in 1328, this late Gothic structure has seen a lot of history, all noted in a self-guided brochure. (It’s Grote Kerk’s wooden spire which serves as our primary navigational marker in Haarlem.)

One of the more interesting features of this grand church is its impressive organ. Even more interesting were some of the guest organists:  a child of age ten named Mozart in (1756- 91) and Handel (1685-1759), the latter at an older age. 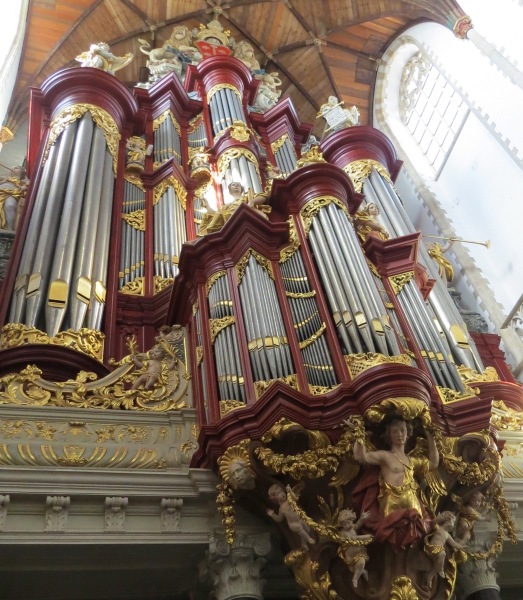 We wandered around the building thinking again how chilly it must have been for worshippers way back when as we were freezing, and that’s with unfreezing temps outside.

Surprisingly three old ships hung from an arch, donated by the Shipbuilder’s Guild and modeled on ships of the day. My husband, naturally, stopped to study them. 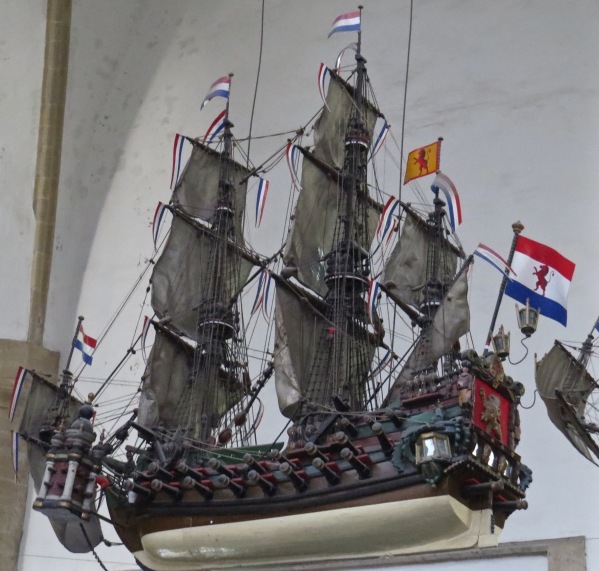 Not surprisingly, my husband also noted an old map where he happily pinpointed JUANONA’s current mooring site along the side of the ancient canal. 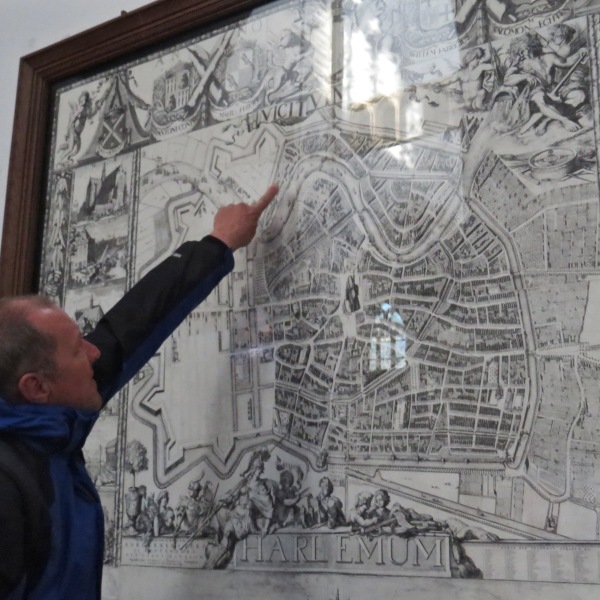 This church also carried scars from the horrific siege of Haarlem in 1573 when the Spanish Duke of Alba under Philip II’s orders conquered the city and executed its inhabitants. 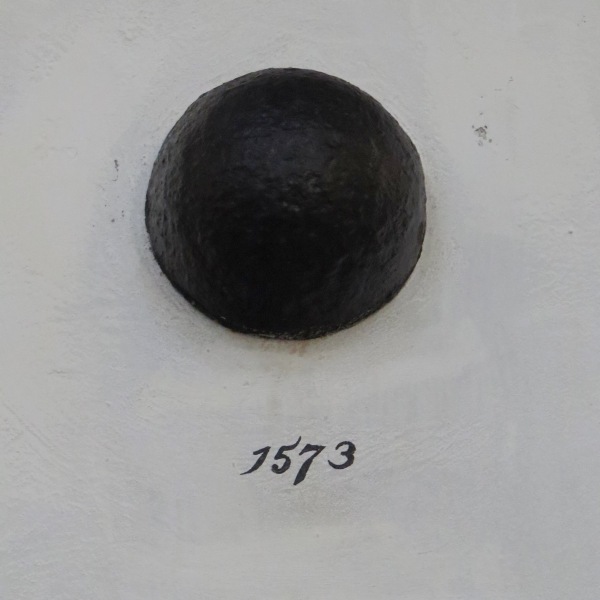 By now it was lunch time and a wonderful Saturday market offered tempting offers hard to resist as see passed cheese vendors with their samples.

We chose the Turkish Doner route, one of our favorite sandwiches, and proceeded to simultaneously enjoy some people-watching and filling out bellies.

Next, back to the river canal, which brought us to Teylers Museum, the oldest public museum in the Netherlands.

This museum carries the name of its benefactor, Pieter Teyler van der Hulst, whose hofje we visited that morning. He left his large and diverse collection to a foundation for promoting the study of science and the arts.

Within six years of his death, the Oval Room specifically designed for optimal display, had been built behind Teyler’s former residence and opened to the public. Since then three extensions have been built resulting in a maze of rooms for visitors to wander through.

Each section enveloped us in its own time period. The architecture surrounding each exhibit was as intriguing as some of the odd collections. We walked through some spaces whose wooden, glass-framed cases and artifact arrangements seemed cast from an Indiana Jones movie while others were the height of modernity with white space sunlit by walls of glass. It was like stepping back in time then rushing forward into the 21st century. A bit surreal but definitely entertaining.

Stepping from the high-domed reception hall into the first exhibit room we found ourselves amidst an array of fossils, looking like they’d come out of a mad paleontologist’s world. But, with selective items explained by the audio guide, my attention was easily captured. At times I was amazed to read of the historical significance of one lone fossil thanks to Teyler’s avid interest and scientific funding.

The two rooms of fossils then flowed into one of diverse instruments used for various physics and chemistry experiments, more in tune with Max’s interests than mine, followed by a tiny closet-size area housing conjurers’ and magicians’ use of science for their parlor tricks (not as interesting as it sounds…) and the Luminescence Room created in 1938 to demonstrate fluorescence (material continues to emit light in spite of the external light source being turned off), phosphorescence (conversion of invisible ultraviolet light into visible light by fossils and minerals), and electroluminescence (an electrical charge in tubes filled with a specific gas) (at least I paid attention to the descriptions here)…

to one of the highlights of the entire museum:  the Oval Room whose purpose was to exhibit the initial collection when it opened in 1784.

A specific display, that of the minerals, is in itself historical because they’re laid out according to the 18th-century French cleric and mineralogist Rene-Just Hauy.

Why this is so important, I don’t know but I did find that tidbit fascinating. Plus, I liked the colors.

Our exploration wound its way to the world of art and numismatics and medals. Two coins caught our attention in the latter room, one from 65 C.E. with an effigy of the Roman Emperor Nero and one featuring a portrait of Michelangelo (1475-1564) created by a contemporary of his, most likely Leone Leoni who served Emperor Charles V of Germany and Holland.

The two art galleries featured primarily oil paintings from the past 300 years. Here, too, the format of the display mirrored  the time period in which the room was added. Built during the 1800s Gallery I had paintings symmetrically hung in rows top and bottom. Constructed later, Gallery II, however, showcased its art in a singular line along its walls, more like one sees today in art exhibits.

Here we were introduced to some of the most prominent Dutch landscape artists of the 19th Century, such as Andreas Schelfhout (1787-1870). 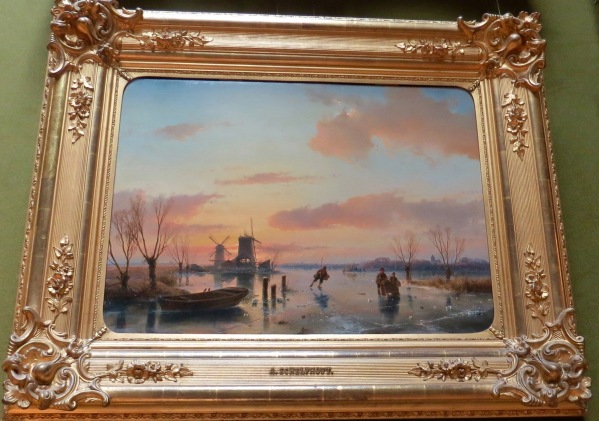 I couldn’t ignore “En Plein Air” by Constant Gabriel (1828-1903) due to artist friends whom I know enjoy this activity. 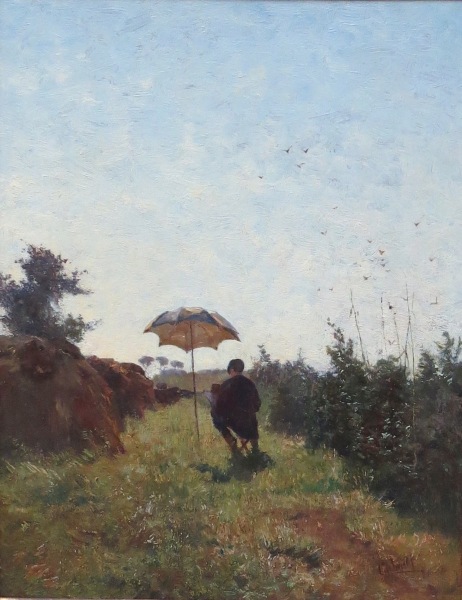 And, opened pages with exquisite water colors of flora and fauna, such as this 1758 book, couldn’t help but catch one’s eyes. 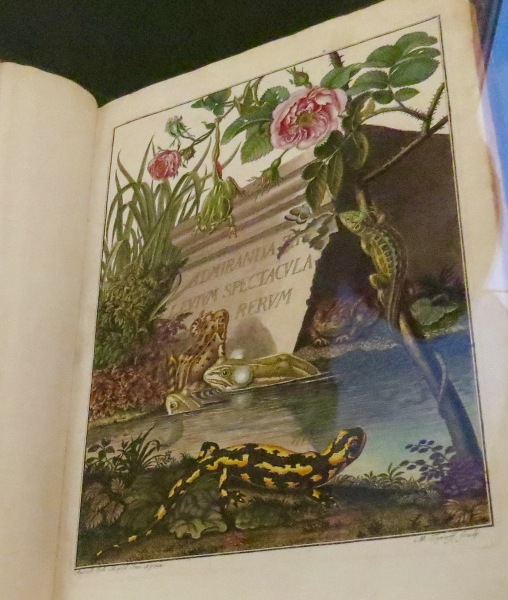 We also poked our head into a cafe whose ceiling and a wall were festooned with children’s artwork. I couldn’t resist snapping a shot of the myriad colors seemingly dangling outside the large glass windows due to the reflection. 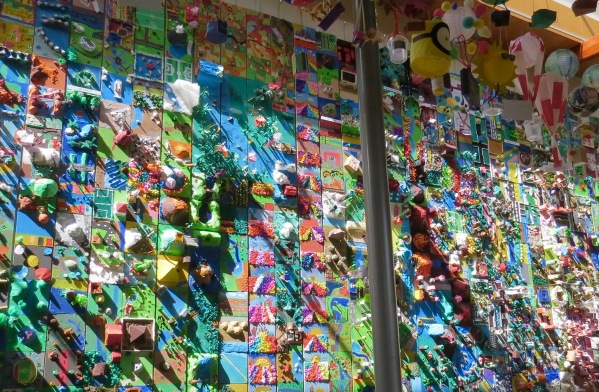 Haarlem, I think you’ve put a spell upon us two sailors.

2 thoughts on “Another day in Haarlem”