Figuring the celebrating of Tet would be winding down we entered Vietnam to begin exploring this country north to south. Flying on Vietnam Air, now a favorite of ours due to its reasonable fares and efficient service, we landed in Hanoi Thursday night and walked into an airport sparkling with newness and the buzzing stream of travelers.

Thanks to a recommendation from our friends Marcia and Steve we had arranged to stay in the same hotel they did, located in the Old Quarter and close to many key sites. We felt immediately immersed in the culture as we stepped out of the cab onto a sidewalk populated with numerous small storefronts, stalls selling street food, and the ubiquitous scooters zooming through the streets. Yet, as soon as we walked through the hotel door, a calmness settled around us and we knew we’d find a welcome oasis upon our return from upcoming days of touring .

Friday morning we had arranged to meet with a friend of Laurie’s. Duyen (the ‘D’ pronounced as ‘Z’) had met her when he attended graduate school in St. Louis. With a background in finance, which he had parlayed into tourism, he helped us plan our trip through Vietnam. In addition to giving us practical information we also learned how he came to study in the U.S.

With the Vietnamese government recognizing the value of tourism, jobs in this industry offered an opportunity to earn a decent living. Duyen wanted to practice his English, and one of the simplest and cheapest ways involved speaking with English tourists. Seeing a foreigner in a park, he approached her and asked if she’d speak with him. No money or gifts were wanted, only the opportunity to learn a language that promised a better living. From that initial meeting, Duyen made a lifelong friend. They communicated over the years and eventually Duyen, having completed his studies in Vietnam, travelled to Missouri for graduate school. His story – consequential foreign connections developing from chance encounters – is one we heard several more times, including from an Austrian staying at our hotel.

After meeting with Duyen we left for our first destination:  Hoa Lo Prison Museum, known as the “Hanoi Hilton” by Americans.

I don’t know too many people of my generation who haven’t been touched by the Vietnam War; but a lot of my contact with this war was through the media and campus protests. Walking through the doors of this complex changed that. And, throughout our time in Vietnam I felt the echo of this war trailing us as we toured other sites associated with the deaths of so many on both sides.

First used as a prison by the French beginning in the mid-1800s, there were displays of Vietnamese men… 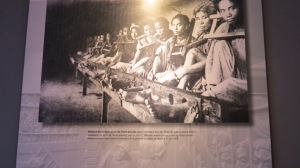 incarcerated for crimes against the colonists. A guillotine used for executing prisoners added to the gruesome feeling one got walking through these rooms. 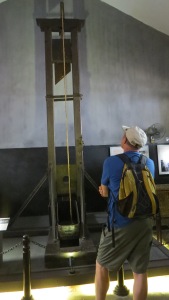 Other visitors had told us about Vietnam’s framing of the war, which positioned it from their eyes. No surprise considering it’s their country and, as another friend said, winners write the history books. However, the displays at this prison and elsewhere turn fiction into ‘facts’.

and a pensive portrait of captured pilot Jeremy Denton (someone I remembered from growing up in Va. Beach) who had alerted the U.S. military of POWs’ treatment by blinking ‘TORTURE’ in morse code during a 1966 Viet Cong propaganda film.

I’m not saying the U.S. is innocent of atrocities or Vietnam is alone in demonizing their enemies. Far from it. All one has to do is turn on the evening news or browse articles by credible journalists reporting from around the world. But, in watching a film on continuous loop amidst the photographs taken at this prison I had to stifle my disbelief. It was then I began snapping shots as words appeared on the screen: 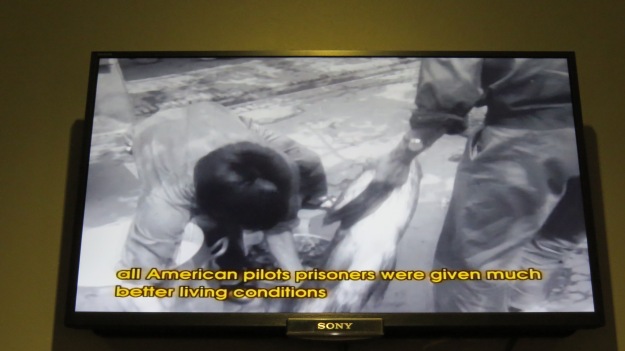 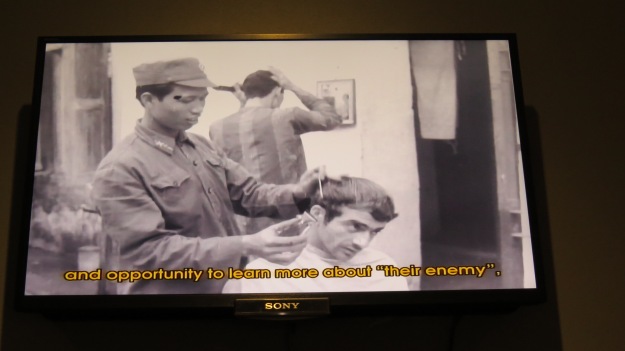 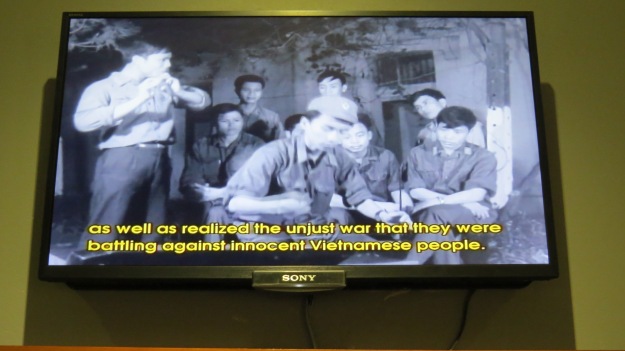 To clear our minds of the horror found in the now-sanitized cells of Hanoi Hilton we exited the building in search of much lighter fare. Walking towards Hoan Kiem Lake, which was close to our hotel, we found a restaurant perched above a rotary and treated ourselves to refreshments as we gazed down on a typical Hanoi view of today. 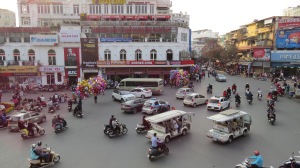 Saturday we opted for Ho Chi Minh’s Mausoleum, which was an easy cab ride from our hotel. We hopped out only to find ourselves being directed to a very, very, very long line that streamed down at least a half of a mile from the entrance. Being the last weekend of Tet, this revered figure’s grave attracted a lot of tourists, us being only two amidst tons of others, the majority being Vietnamese.

Yet, the line moved quickly and within thirty minutes we were being ushered through security (dropping off our camera and knapsack). Becoming part of a hundred-leg centipede we shuffled under a covered walkway into an open space and finally spotted the massive gray structure hosting the embalmed hero of Vietnam’s independence from foreign powers. 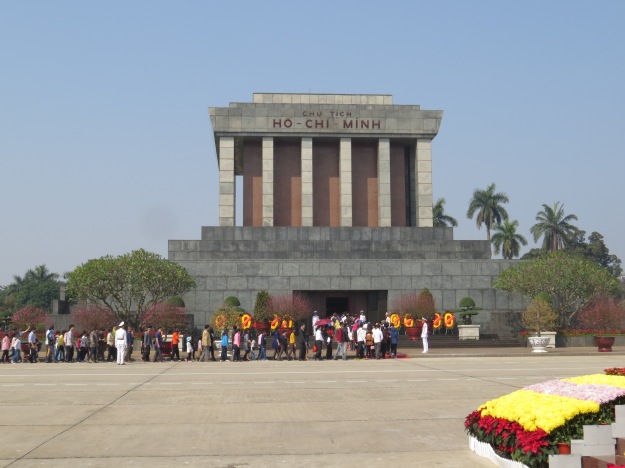 We continued as part of the procession, snaking our way up the steps and into the darkened room featuring Ho Chi Minh.

We were fortunate his body was actually on display. Evidently he’s sent to Russia for several months of maintenance each year (and that’s as much detail as I need on that topic). No photos were allowed so we happily took some shots of the white-clad guards both standing and goose-stepping.

Max being Max had to defy the regulations by dipping a toe into the no-entry zone.

Must say the site was lovely with its gardens, grandiose buildings (including the Ho Chi Minh Museum and Presidential Palace along with Ho Chi Minh’s stilt house where he lived off and on from 1958-69). Instead of touring those we left the square and headed back to retrieve our checked backpack*.

*The camera surprisingly was perfectly timed to match our exit from the mausoleum; as Max pointed out they must have some conveyor belt sending visitors’ cameras underground to this specific checkpoint; pretty impressive.

On our way we noticed a woman recycling all the plastic water bottles discarded by visitors. We were thinking what a great example of being environmentally conscious. We didn’t realize just how much they were into saving the earth’s resources until we saw she was actually emptying out the water from the individual bottles into one giant jug.

In search of more war remnants we walked down tree-lined boulevards past relics of French colonialism. 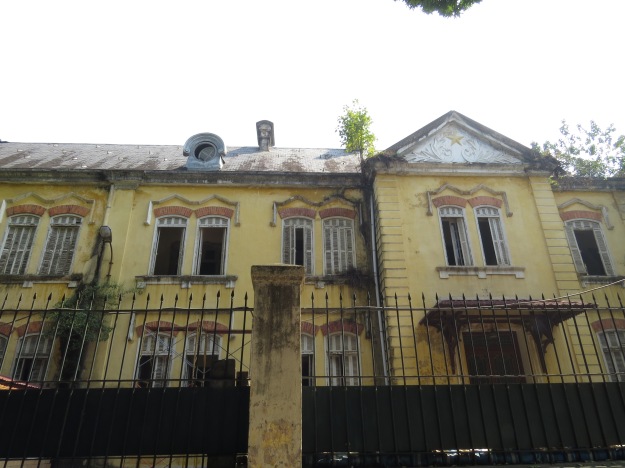 Continuing on we found Huu Tiep, another pond in which a B-52 had crashed during the 1972 “Christmas Bombings”. Another sobering casualty of the war.

Grabbing a cab we headed across town to the Vietnam Museum of Ethnology. We’d heard this museum was well-worth a visit and we totally agree.

Yes, it was overwhelming in the amount of information provided on three levels (how could it not be with 54 ethnic groups?); but, strolling through the displays, we couldn’t help but absorb some knowledge of this country’s rich tribal heritage. Unfortunately, no photography was allowed so we just meandered and peered until our eyeballs glazed.

We had heard one of the best ways to see some of the country’s traditional lifestyles is to visit Sapa, a former French hill station close to the northern border.  Boasting stunning country vistas and offering beautiful trekking, this mountainside town is home to several tribes still dressing in traditional clothes and melding traditional lifestyles with modern ways. Our friends Jack and Zdenka (who just finished their sailing circumnavigation this spring!) gave us the name of a Hmong guide in case we made it to this town. We wish we had but not enough time and the forecast of continued cold and damp weather kept us heading south and along the coast.

By now we were ready to rejuvenate ourselves in A/C and some liquids–which we could at least pretend hadn’t been slurped before–so back to our hotel.

Sunday was our day of simply walking around Hanoi culminating with watching a Water Puppet Show, an art originating in northern Vietnam and dating from the 11th century. With communal ponds a common feature in many towns and villages, this puppetry provided entertainment for locals.

The lacquered wooden puppets are manipulated by puppeteers standing in waist-deep water behind the curtain. It’s confusing to envision just how these puppets work, but here’s a site that explains it a bit more: http://www.sagecraft.com/puppetry/traditions/Vietnamese.html.

In spite of the narration being in Vietnamese, the show enveloped you in its playful drama. As Max’s son Chris told us the music alone is worth hearing even if one can’t understand the puppets’ tales. (You can just make out the narrator and musicians and singers on the left and the puppeteers in the water stage after the hour-long performance.)

That night we wandered once more along the lake becoming part of the hustle and bustle of locals and tourists. We had learned how to cross oncoming lines of scooters with steady determination, thanks to Marcia and Steve’s advice.

Our time in Hanoi was coming to a close. Not having known what to expect from a country where we were once considered an enemy, we rarely felt animosity or resentment from the Vietnamese. Just the opposite. Only government propoganda, a common communication tool of most countries, appeared to stigmatize foreigners. However, the Vietnamese are focused on looking ahead, not backwards; and, their strive for excellence thrummed throughout a country striding purposively into the future.

Next, our first glance of the coast!