Max’s sister Judy and husband Doug had flown over from the US the previous week and set off on a Scotland road trip beginning in Glasgow. Due to weather and winds cooperating, we managed to arrive in Amble in time to rent a car and meet them on their loop to the eastern side just above Edinburgh. They had scouted out some local highland games, and we arranged to meet in Birnam mid-morning.

Supposedly highland games originated in Ireland in 2000 B.C.E. and migrated to Argyll and beyond in the 4th and 5th centuries via the Scotts. These were war games, which identified the best warriors amidst the tribes or clans. The games evolved into public festivals and continue to this day with some brief interruptions thanks to battles (1746 Battle of Culloden) and wars (WWI and II). Whatever the reason, all I know is we would definitely go again, not the least being it’s always nice to see men walking around in kilts.

We arrived just as the field became ringed by spectators and contestants.

An empty bench was found 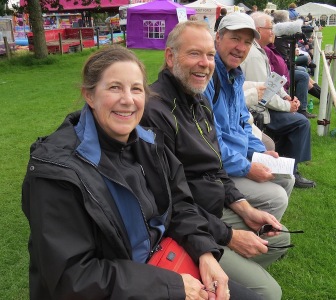 and we began people watching as Doug perused the program labeled 132nd year vs. the publicized announcement stating 2015 was the 150th year. 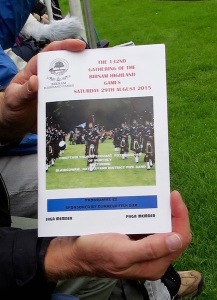 No matter, because, whatever anniversary it was, these games easily became one of the highlights of all our Scottish visits.

Under the constant hum and drone of bagpipes

we watched track races (numerous dashes and laps, and don’t ask if we even knew who won which heat or final race), cheered on the occasional cyclist on bikes featuring no brakes and no gears,

glanced at the dancers from both across the field and then up close, 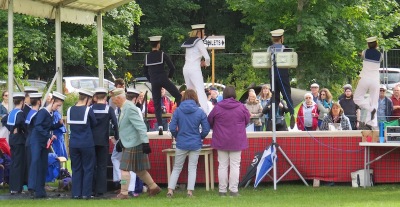 all while eyes kept returning to the big guys doing the heavy lifting. 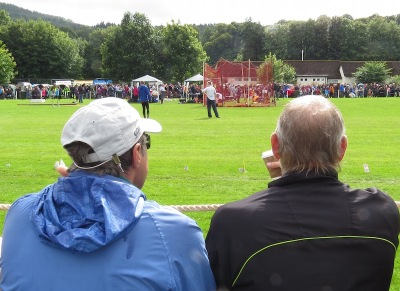 And, those guys were BIG. But, then again, their events all involved some sort of pushing dead weight through the air. The competitors must be chiropracters’ worst nightmares or, more likely, convenient retirement plans. 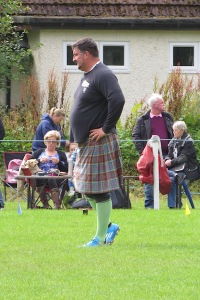 We ended up placing imaginary bets all on the guy in the fluorescent t’shirt. With the competition beginning around noon and running until after 4:00 p.m. these strong athletes, about six of them, swung shot puts (heavy balls up to 26 lbs.) and tossed the hammer (metal ball around 22 lbs. attached to a wooden handle)  while proving not all go bare under those woolen skirts.

The most iconic event is the tossing of the caber, a full-length wooden log. The sport involves balancing the pole while lifting it, running forward to gain momentum, then tossing it end over end so it lands as close to 12 o’clock (based on the competitor’s orientation) straight ahead of the tosser. Note that it takes three men to return it to the next tosser. 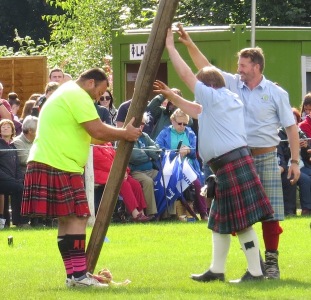 During the festivities Judy and I strolled around the field enjoying the sights. 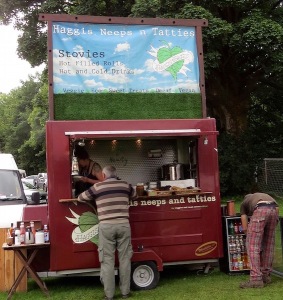 At one booth Judy found some homespun wool and the woman who makes it. The proprietor graciously posed for a photo after having loaded up Judy with beautiful yarn. 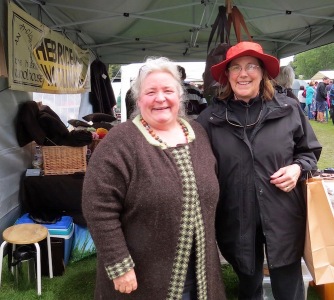 While I was standing there I overhead a woman saying she was living in London now but originally hailed from Virginia. Of course, I couldn’t resist so I asked from where. Turned out she was from my mother’s hometown, Charlottesville, and knew my mother’s half-sister’s (Carol’s) second husband, Herbie. The conversation politely ended when she confusedly asked if I was Carol’s sister. Time to move on.

Judy and I spotted some handsome gentlemen resplendent in their festival garb sitting in a wooden box.

In conversation they told us they were judging classical bagpiping with contestants presenting three pieces (some as long as 20 minutes, and their selecting one to play). Judy discovered she had seen photos of one (the Scott on the right above) when his piping band had toured the states awhile back. Photographs of their visit are hanging in Blair Castle, which Judy and Doug had visited earlier.

Although we enjoyed speaking with them as well as their friendly banter, when returning that way on our circle back to Max and Doug, we pretty much kept on walking. As I have mentioned earlier, the pipes were the constant backdrop to all activity; and, as much as my skin becomes rippled with thrilling goosebumps when I hear them, I discovered there comes such a time where the haunting tones become whines. The next piper competing began playing a tune that neither Judy nor I could discern much variation so we slowly inched away from the area.

The weather featured almost as much variety as the games’ components:  from warm sun to cloudy skies to spitting showers. At one time we got all three at once, but we were prepared especially Max with his Hurtigruten oily on. 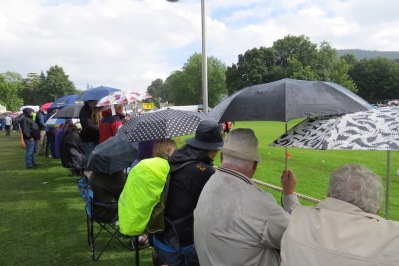 After four hours of festivities and bagpipes, the natives were getting restless; but, the organizers knew they had an ace to play yet for no one was leaving before the Haggis Eating Contest.

Yes, that delectable gourmet item that is made with those ingredients we all crave–sheep pluck (heart, liver and lungs)–was featured as one of the last events of the games.

A line of contestants gathered at a table decorated with hats, jugs of liquid from beer to orange juice to water, and plates of individual, bulging balloons of haggis.

The bell was rung and they were off 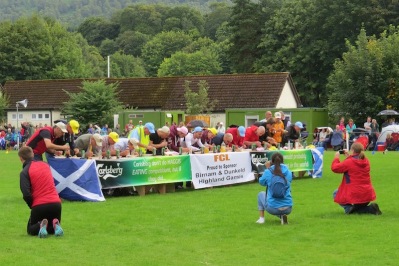 and, well, choking this beigey-gray, oozing stomach-casing food morsel down. Various techniques were in play, even one (who turned out to be the winner) dousing his with water to make it slide down his gullet faster.

Needless to say I couldn’t keep my eyes off of the contestants, sort of like how I’m both fascinated and repelled by watching slithering snakes. The event was a feast for one’s eyes… 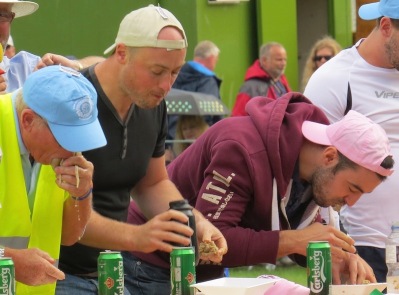 until one fortunate soul took his last gulp and raised his hand as the first one done. 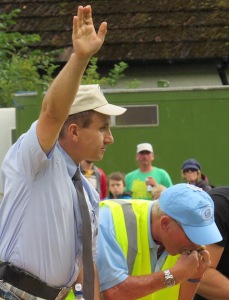 With that we left to head to our B&B all with a finer appreciation of what it takes to scarf down a ball of haggis.

7 thoughts on “Haggis Land with Judy & Doug: PART I”