Tuesday morning Max and I still couldn’t get showers (five days and counting now) so resigned ourselves to another day of ‘boating bodies’. We headed the ten miles to Nusfjord. Hugging the shore we saw the network of tunnels and highways connecting these small coastal villages, noticing the covering on some of the roads in the event of falling rocks and/or hunks of snow.

No matter where you turned, the skyline sharply zigged and zagged vertically. I must say at times I sigh when I get snap yet another photo of the view, but I just can’t help it.

We had read about this teensy harbor, and, frankly, whenever I see that, I typically don’t have a great deal of hope of enjoying the docking experience.

The pilot book did warn us not to be concerned about how narrow and tiny the harbor looked–that boats can get in and tie up. We poked JUANONA in and saw our friends on STAYER with another boat rafted to them.

They all beckoned us in waving us to become the third rafted boat. At first we thought we’d be better off going along the north side of the pontoon perpendicular to their pontoon but then decided to heed their welcoming arm waves and rafted next to them. Marie Joseph and Yelp (sp?) also from The Netherlands on their lovely boat helped us tie our lines to theirs and let us know it was absolutely no problem for us to traipse across their deck. We had read rafting was extremely common in Norway, and Maaike and Douwe had also confirmed this. Yet, I must admit I was so conscious of our shoes trekking land dirt across these pristine decks that I opted for removing boots and socks and to go barefoot when crossing.

Nusfjord is a town purchased by a private company and converted into a living museum. This picturesque fishing village was a bit Disneyish in its set-up with a small cod fishing museum, sawmill (lumber had been cut from the forest on the other side of the waterway and then floated to this village), and red cabins rented out to vacationers. In spite of feeling a bit odd knowing one had to pay to enter this town, 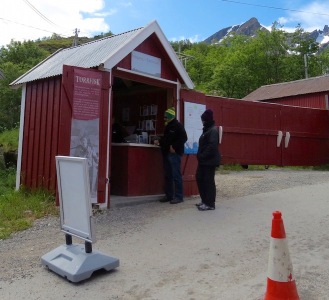 the people working at the reception and information building, the general store, the fuel pump, frankly, at every place here, were extremely friendly and helpful. I was beginning to realize Norway could be giving lessons on hospitality.

Checking out the offerings, once again Max and I realized we would have to go showerless unless we used JUANONA’s spray hose below in the head. (A few years ago Max had cleverly outfitted the boat with two on-demand hot water spray hoses–one in the head, the other in the cockpit–that work extremely well; I just hate using them due to always wanting to conserve water.) We decided to do so and both of us smelled much sweeter for it.

Max and Chris topped up our diesel by doing jerry jug lugging using our dinghy to transport the fuel to avoid carrying across our neighbors’ decks.

A quiet afternoon and night included planning our next port of call, Gullvika, 40 miles northeast, in order to see another heralded anchorage as per our friends Gus and Helen Wilson on s/v WINGS, and Dick and Ginger on s/v ALCHEMY (Thanks to Max’s research over the previous two years we had copies of these folks’ cruising logs and articles as well as other friends’ information we had gathered this past year.)

Scratch the ‘quiet’ night for we were serenaded by raucus seagulls who nested all over this harbor. The sound reminded me of Sao Jorge and the Cory Shearwaters  who swooped and cried over the marina until almost midnight when miraculously the birds would settle down. Just as boats pretty much had to squeeze into Nusfjord so, too, for the gulls. Looking around I noticed nests crammed above doors, along roof edges, even some precariously perched on a small ledge just inside the harbor. What a place not to have ear plugs. 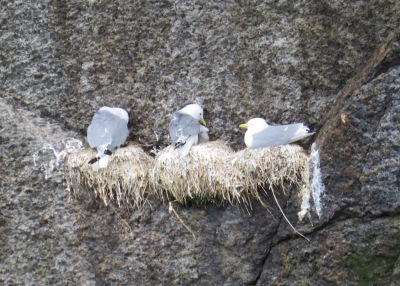 After getting help at the reception & information desk for my sister’s transport from Bodo to Slvovar later this month, I stopped by Maaike and Douwe’s boat to say good-bye. They, too, noticed the bird ‘song’ during the night and were heading just ten miles north to a small anchorage to wait out the forecasted rain the next few days.

With a bright sky and dead-calm seas, we left Nusfjord for Gullvika with s/v STAYER close behind. Out in the open we noticed boats perusing the water with fishing rods. Figuring it was a good place to try for dinner, Chris through the line over board as we saw Douwe doing the same.

About 15 minutes later with no nibbles and knowing we had some miles to go to our next port, we decided to continue motoring. Along the way we checked AIS to ensure we weren’t on any collision course with any ferries coming our way (unlike in the U.S. all commercial vessels have the right of way, whether you’re under sail or not; this means it was up to us to get out of the path of all ferries, barges, tankers, freighters, cruiser liners, and business fishing boats.) While doing so, I’d check to see if any were named CSL Rhine or CSL Trimnes, ships our friend Rod Jones of CSL knew the captains. He said the captains would know Rod and would also be sure to give us room. (Rod is aware of my fear of being hit by a cargo ship!)

After an uneventful but peaceful motoring, we arrived at a beautiful and still anchorage seven hours later.

As we got the anchor ready to drop, both Chris and I gazed at what soon became a very shallow-looking bottom. Quickly letting Max know it didn’t seem very deep, he assured us the depth was okay. Sure enough as we glided over the green-hued water… 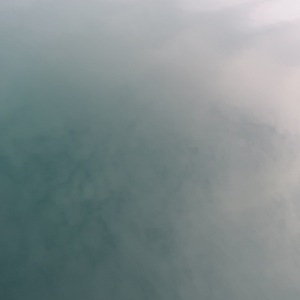 the bottom dropped away and we set the anchor in wonderful sand (always great to see that versus hearing the anchor rumble over rocks).

This anchorage was a perfect place to land with the typical I-can’t-stop-taking-pics opportunities.

We had read that Gus and Helen had caught a cod within ten minutes of anchoring here. It took us a bit longer, in spite of all us trying (Max and I after Chris had landed one),

but, alas, only one small cod was caught (a delicious tease of what a tasty dinner a large one of those promised), so I made pizza and we settled down to another quiet night.

Thursday, July 2, we awoke to the pitter patter of rain, which meant a bunch of reading, writing, planning, and antsyness (me) occurred below. Max tried fishing again (no luck) and I hopped out on deck to just get out into the air. I lackadasically sprayed Simple Green (enviro-friendly, overall cleaner) and wiped down the deck with one of our beat-up sponges. I accomplished swishing rain water around and managed to give the appearance of being productive.

When the rain took a break the three of us hopped in the dinghy and rowed ashore where Max and Chris grabbed some photos from above. I, with my everlasting fear of heights and slippery slopes, stayed behind. (I’m the white dot in the middle.) 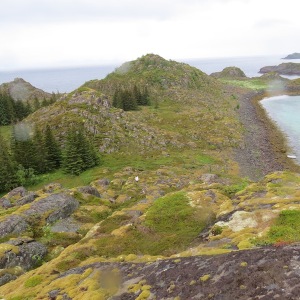 The views even from where I was standing were magnificent, especially that water color; but, Max’s showed the cove at its best:

If you minused the snow, we could be in some South Pacific island from photos I’ve seen from there. 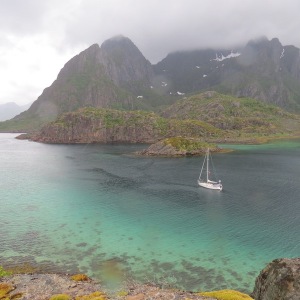 This is looking out toward the way we entered.

And, this is looking out again, but to the mainland 11 miles across. Tomorrow our destination is bit further north and into Tysfjord where we’ll explore more coves and towns. 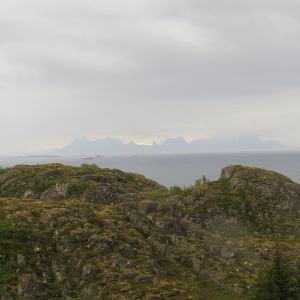 Hopefully weather will improve. But, at least the day allowed us another glorious glimpse of Norway’s coast.

2 thoughts on “Cruising in Norway: Lofoten Islands (Reine to Nusfjord to Gullvika)”