We flew to Delhi and stayed close to the train station for the night to then rise early and catch a train to Agra the next morning. This was our first train ride, and I had prepared by letting extremely little fluid cross my lips. Train restrooms are bad enough in the USA. I could only imagine the experience on an Indian train. 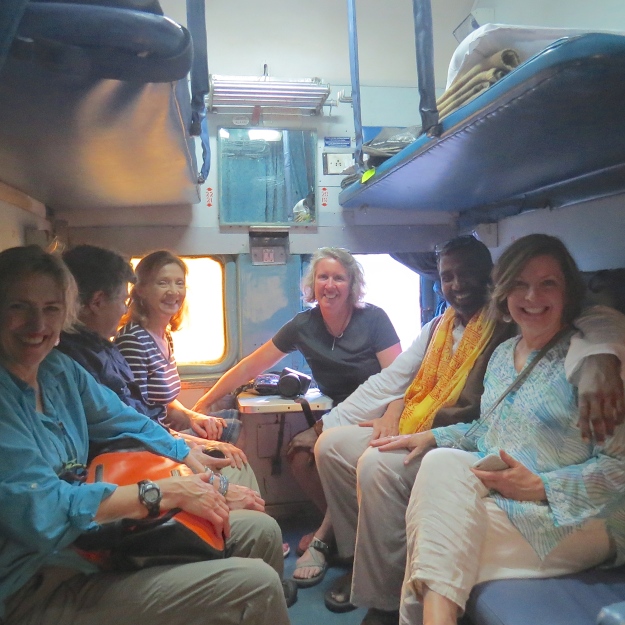 We were in one of the better coaches, yet, even that made me realize just how spoiled I was traveling on the UK trains. In spite of wanting to wipe everything down with our 1/4”-square alcohol wipes it was quite fun. Noel invited each of us up to an open door so we could lean out and snap photos as we zoomed by a quilt of countryside:  irrigated fields gave way to garbage-decorated towns only to revert back to green acres of farmlands worked by small landowners… all cloaked in heavy smog, which was a forerunner to our air in Delhi. 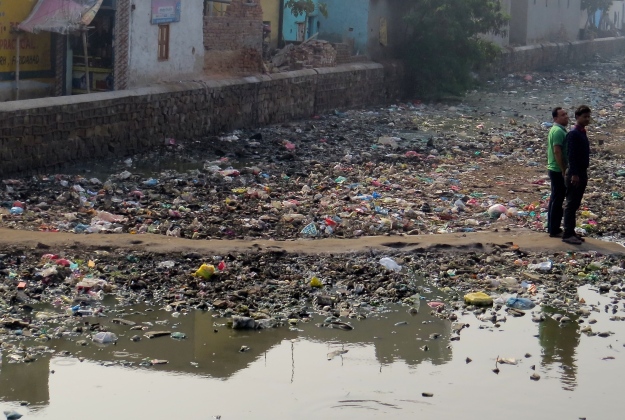 it was also along the ride we saw the traditional method of preserving cow dung for fuel as we passed patties arranged for drying.

Of course, in spite of my few-drops-of-liquid policy I had to use the facilities, and a tactic was born. From now on I would attempt to be the first to use any public toilet. This practice had two advantages:  by facing one of my worst fears early on (just how bad would it be if desperately needing to use a toilet on a moving vehicle), I eliminated any hesitation for when I really needed to use the facilities; and, by attempting to be one of the first I wasn’t faced with as much grime and previous-usage by others. This tactic stood me in good stead as the trip advanced.

During the three-plus hour ride we entertained ourselves with breaking out in “Do, Re, Me” song and Daniel’s tribute to Limca, a new favorite drink.  Purchased from one of the train’s Meals On Wheels guys.

Can you tell we were a group who weren’t afraid to be ourselves? 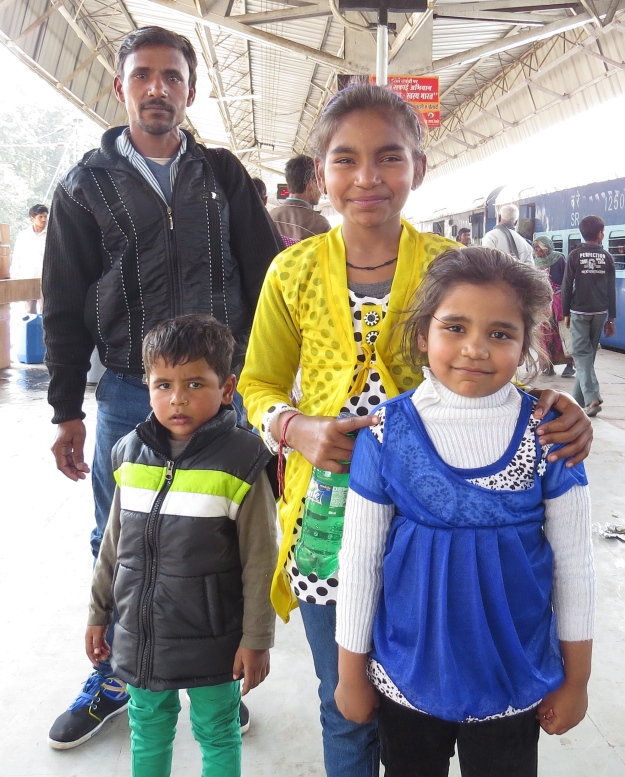 as Noel pointed out the interesting signage that indicated who can use which lounge.

Exiting the station a group of us posed for our own photo before heading to our hotel for our stay.

We spent the late afternoon exploring a local bazaar.

We were entertained by some young dancers until Noel said they most likely had been sexually abused. He also had mentioned earlier India still had eunuchs.

As we were strolling along in the market I heard a familiar sound but couldn’t quite place it. Puzzled I turned toward the buzzing noise only to realize we were going to be fumigated again. We all quickly took it in stride  creating our own face masks. 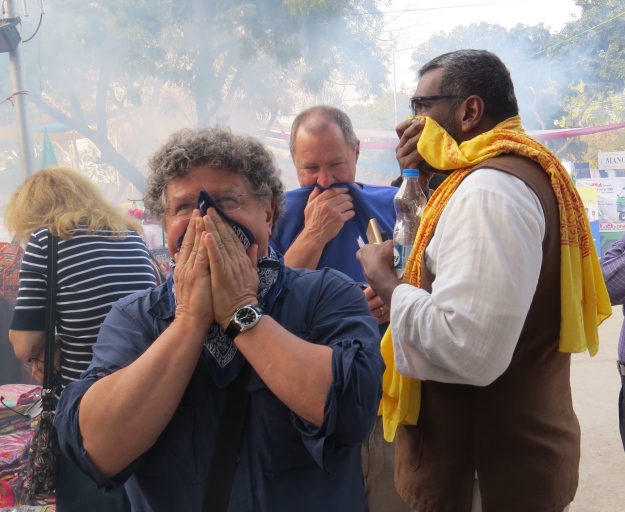 That night we attended two weddings, one by just being there and the other due to Noel’s Charm Offensive obtaining an invitation. 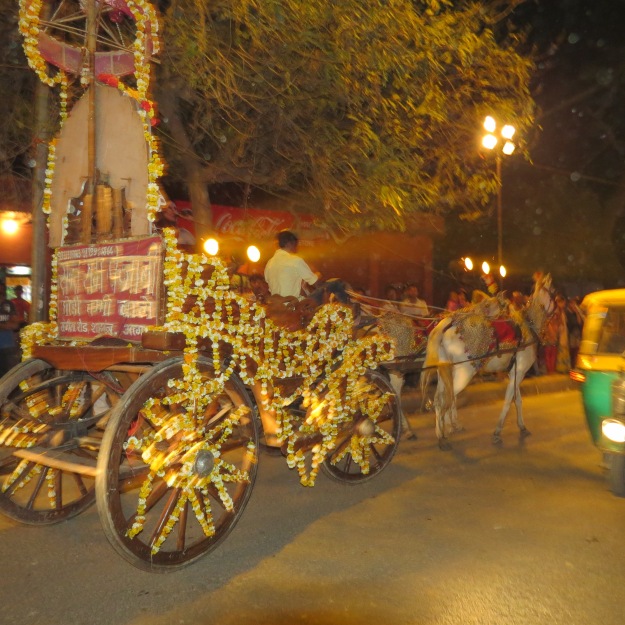 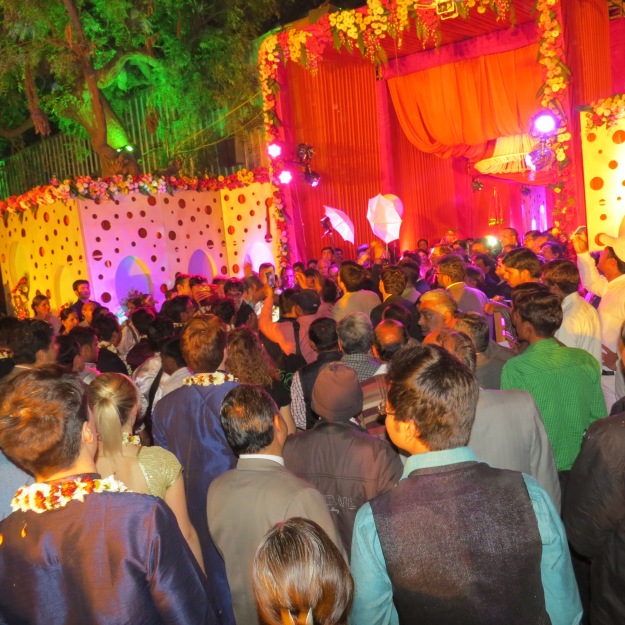 This required us to dress in our Indian finest and then ham it up. 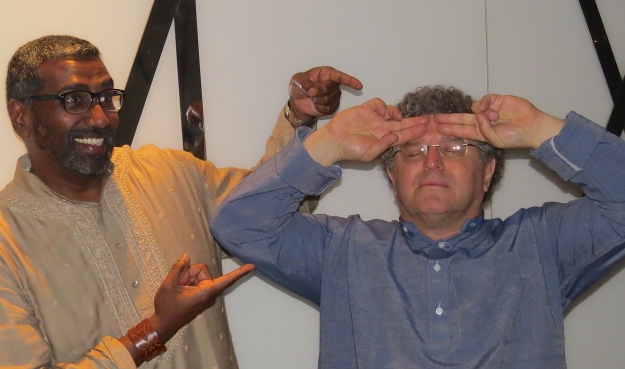 It also provided me with one of my favorite photographs of my husband who was looking mighty fine in his Indian attire. 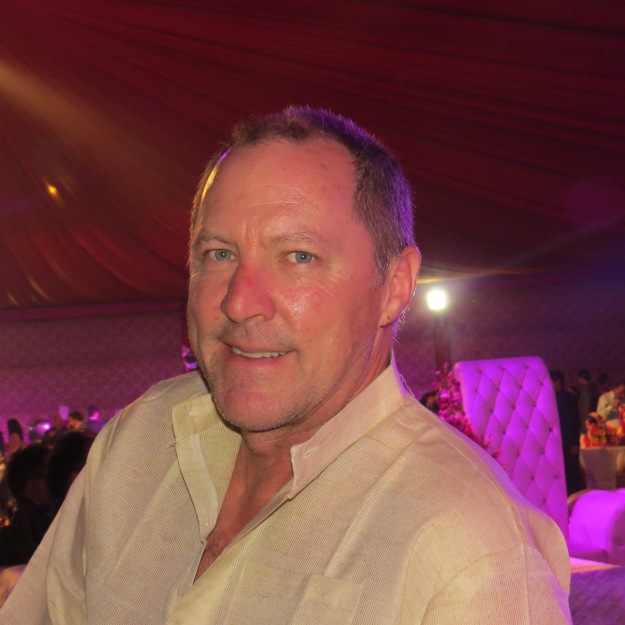 The next morning we had another delicious meal at our hotel with some of the nicest wait staff. One guy had the best smile, Max posed with him so I could get a photo. Throughout our time in India we ran into smiles such as this.

We walked down and stood in line to enter the Taj Mahal where security guards searched bags for any food. Resident monkeys kept close eyes on this, peering down as visitors’s pocketbooks were emptied of any contraband.

While waiting with our group I noticed a monkey gleefully scampering away from colleagues on the iron scaffolding. Peering closely I saw it was grasping a colorful tube. When focusing the zoom on the creature I burst out laughing. He has absconded with Leslie’s smarties, which she had brought all the way from the US with plans to hand out to children. How the little fellow grabbed them I don’t know but her smarties were certainly a huge hit. 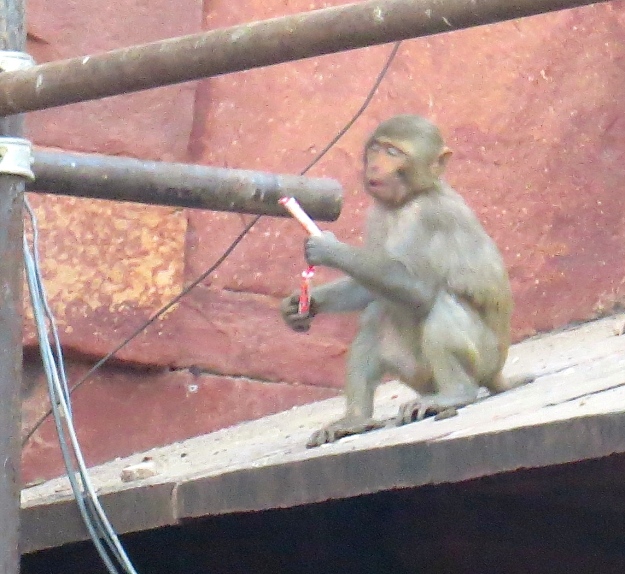 The Taj Mahal has been coined the “a teardrop on the cheek of eternity” by one of India’s poets, Rabindranath Tagore (1861-1941) , and it deserves that descriptor. This historical landmark, one of the seven wonders of the modern world, was constructed by Emperor Shah Jahan. Remember my mentioning Abkar, a Mughal Emperor? Well, Jahan is his grandson. Like his grandfather, Jahan was known for his military prowess but his interest in architecture also earned him the title “Builder of Marvels”.

Shah Jahan began construction of the Taj Mahal the year after his third wife and love of his life, Mumtaz Mahal, died giving birth to their 14th son in 1631. Legend states she requested him to build her the most beautiful tomb the world; and, he did over the next eight years.

The attention to detail was amazing. The architect had also created some mirages, such as creating a chevron pattern that made the vertical pillars appear hexagonal. 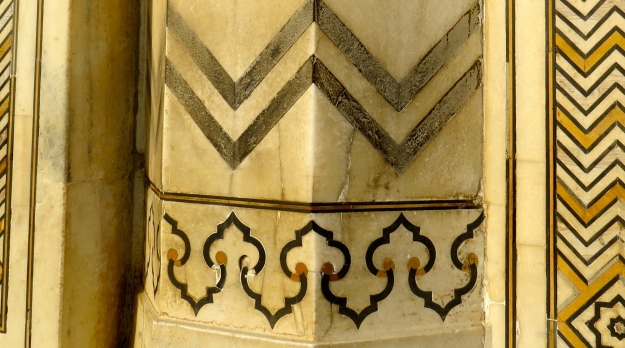 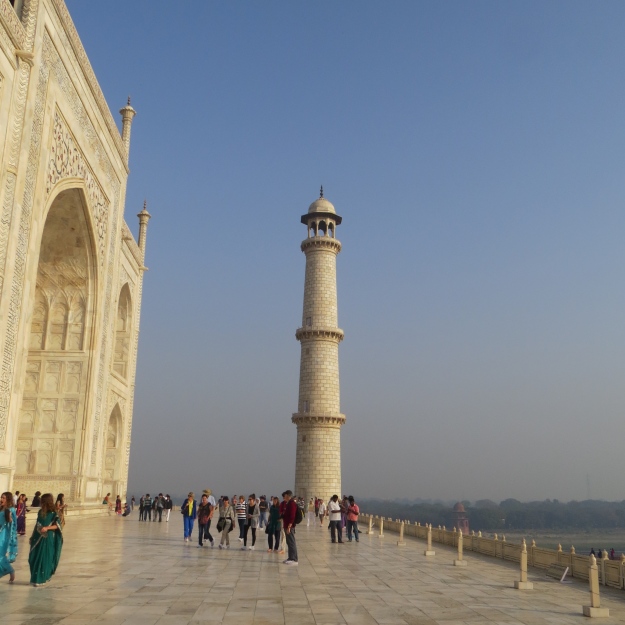 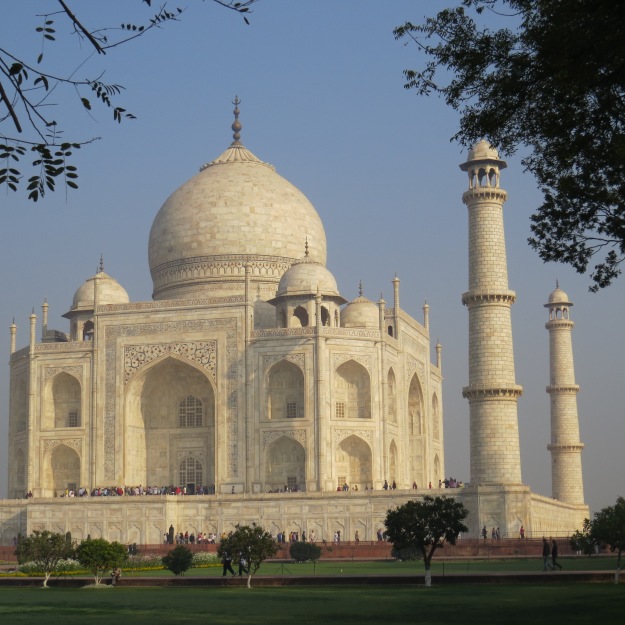 Using materials from all over India (and over 1,000 elephants to carry it) 20,000 craftsmen constructed the Taj Mahal located on the banks of the Yamuna river. The colors are magnificent, surrounding the ethereal glow of the marble with pastels. Even the birds seem to follow this color scheme. 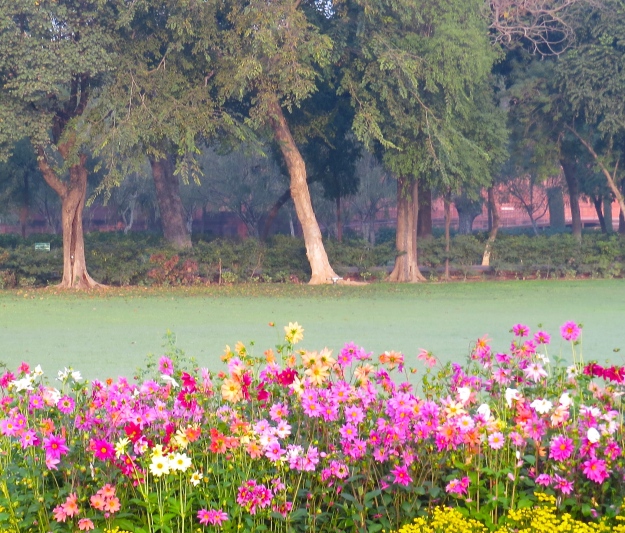 And, I couldn’t help but notice the surroundings were a perfect backdrop for Layne.

Shah Jahal was overthrown by his son Aurangzeb in 1658 and died in 1666 as a prisoner in Agra Fort. Supposedly, his favorite daughter installed a mirror in his cell so he could gaze upon his beloved’s tomb. (Another link to our previous site visits:  Aurangzeb led a siege against the Golconda Fort in 1687 finally scaling the walls and forcing the surrender of Abul Hasan Qutb Shah and acquiring the hefty wealth of Hyderabad.)

Exiting to the other side we found a scene from early ages. The river stretched out in front of us lending an other-wordly air to an already awe-inspiring structure.

Returning to the front I snapped a shot looking back at one of the gated entrances from which we entered. I thought of the photo of Princess Di being here without a crowd of people. It must have been both eerie and lovely. 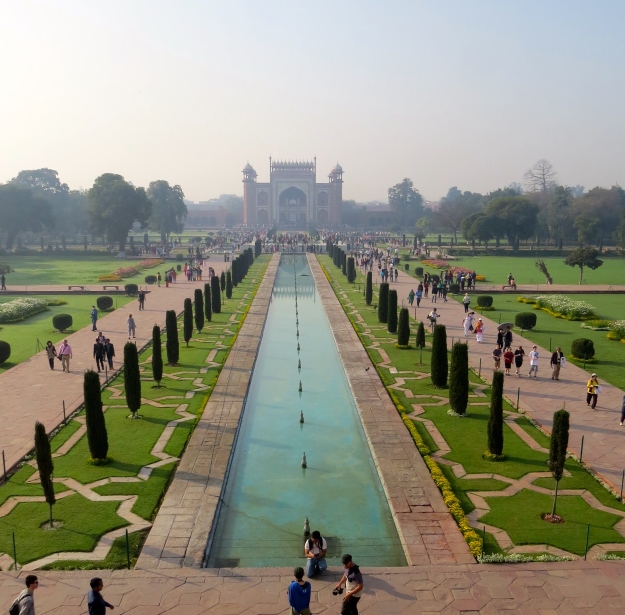 Of all the places we saw in India, this site is maintained the best with no trash strewn about, lovely flowers and grounds, 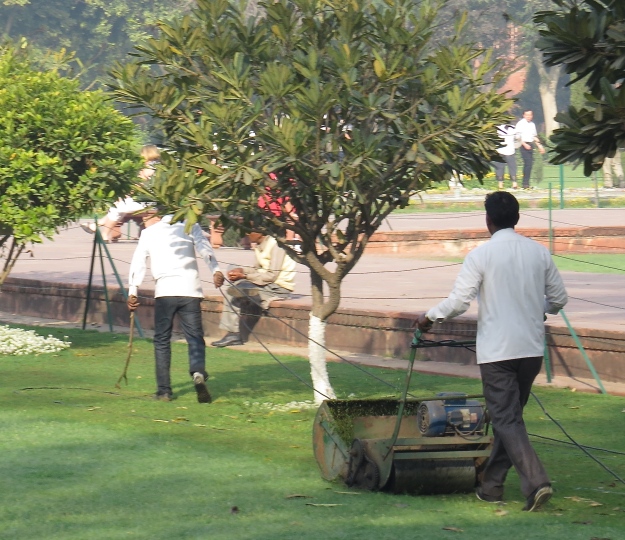 and a structure whose sole purpose is to amaze and awe visitors. The grounds were able to absorb all of the busyness and sounds that come from passels of tourists (reputed to be more than twice the population of Agra), leaving a tranquility rarely encountered in our Indian adventure.

Once you sat down you and gazed upon one man’s memory of his beloved, it’s difficult to leave, a feeling we shared with many other visitors.

This site really did lull one into a surreal peace.

Returning to our hotel in a cab, I couldn’t help but notice even the taxis pay homage to the Taj Mahal colors.

While waiting for our transport, we experienced a typical communication situation. Noel decided to arrange a car ride versus taking the train, allowing us more travel flexibility. Noel had agreed to  hire a car that the manager said would be a new vehicle equipped with all the latest comforts. Well, after waiting for 30 minutes the ‘new’ one appeared. Evidently ‘new’ meant it had four wheels and some seats.  Another half hour passes and the driver reappears with the manager’s own car. It offered better comforts but, since it wasn’t licensed as a tourist vehicle, we ran the risk of being fined if caught on the highway. So, reject #2. Finally, the driver shows up with another mini-van. Even though it was similar to the first in terms of comfort, at least  it was legal. With that we stuffed ourselves in and merrily rode the highway back. 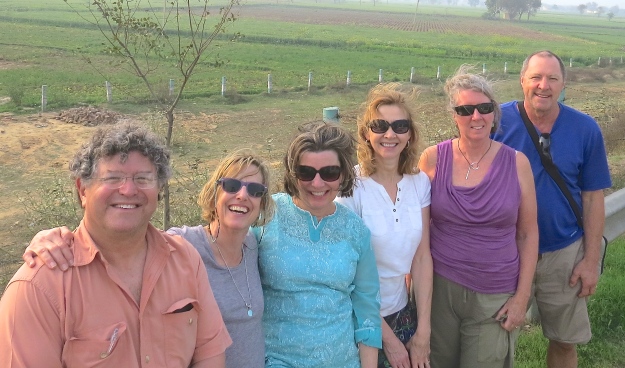 I believe Noel has the knack of ensuring his peeps are all flexible for I found our group always made the most fun out of any experience. Our three-plus-hour ride back to Delhi was no exception. Delhi, here we come!