On Sunday, September 7, we were up and out of the Marina to catch the favorable tide to Dover. No wind

but, if we ran out of favorable current, at least we wouldn’t be bucking wind AND tide. I’m a big fan of turning on our engine as well as appreciating it more when it’s turned off.

One noteworthy event was the crossing of the Greenwich Prime Meridian, the North-South line serving as the zero reference for Longitude.

It’s really blurry and we were just an itty-bitty bit passed it (heading east) but you can make it out (all the 0’s at the bottom).

As the haze lifted we spotted Beachy Head and its striped lighthouse against the brilliant white cliffs. 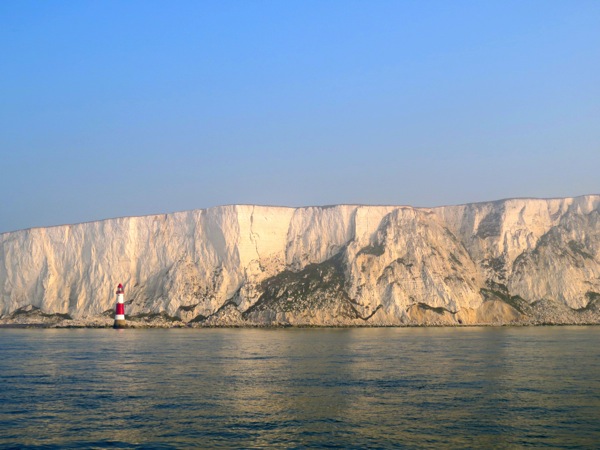 Ten hours from when we left Brighton we entered Dover Harbor, which is so busy they have traffic lights to let you know when it’s okay to enter. (This is a view looking out to the western entrance.)

In spite of the London Chunnel taking a chunk of Dover’s business to France, there are still zooming ferries heading to/from Calais (less than 20 miles away), multi-decker cruise ships lining the western quay, and local fishing boats claiming their home berths in addition to little guys like us. 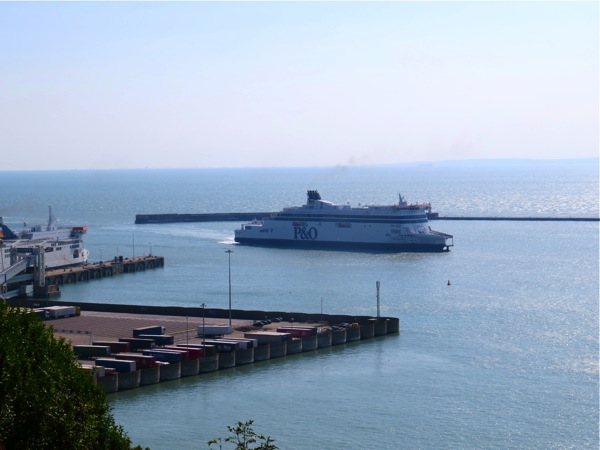 But, we hailed the Harbor Control who gave us permission to head to the Inner Harbor where we waited at the visitor’s pontoon for the gates to open to Dover Marina.

While waiting we met a family behind us who had just been out for a day sail. The 12-year old boy had gotten a GoPro camera for his birthday and was generously sharing some videos of him and his uncle swimming earlier in the day. Must admit it was fun being around someone so young (to me ) and so enthusiastic. What is it about little kids and their British accents? They just seem automatically proper and polite. And, this guy definitely was both as well as engaging.

After three hours, the gate opened and off we motored to our berth.

Views of the marina; nice backdrop but pretty industrial feeling. 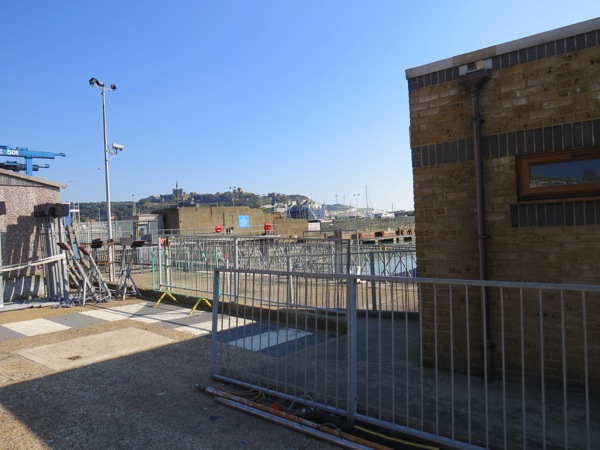 The marina is filled with locals’ boats versus transients, such as us. The location is on the western end of town with the eastern docks comprised of ferry traffic. The town and marina appear to have fallen on hard times due to the 2008 recession compounded by the decline of ferry traffic. Yet, this town has some amazing history, on both ends of the time spectrum.

A Bronze Age Boat (timbers dating from 1550 B.C.E.) was discovered here in the early 1990s and stated to be the earliest surviving cross-channel vessel. So much for swimming across.

In the mid 50’s A.D.C. Julius Caesar got an itch to conquer Britain and tried twice. The second time worked, and to this day one of the two lighthouses remain along with remnants of their fort where Dover Castle now stands. 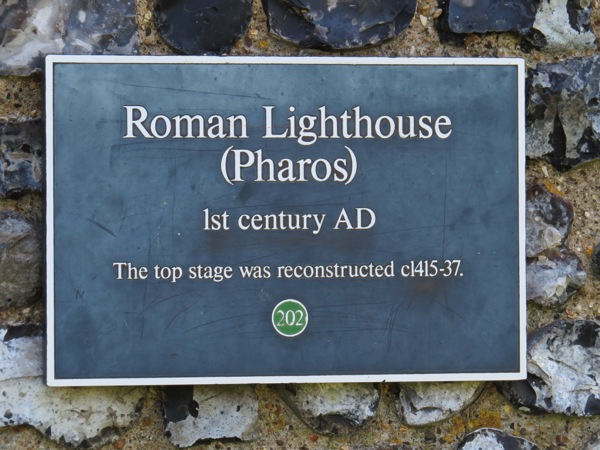 It’s opposite a church first built in 1000 and still holds services (Audrey, maybe an ancestor? :) 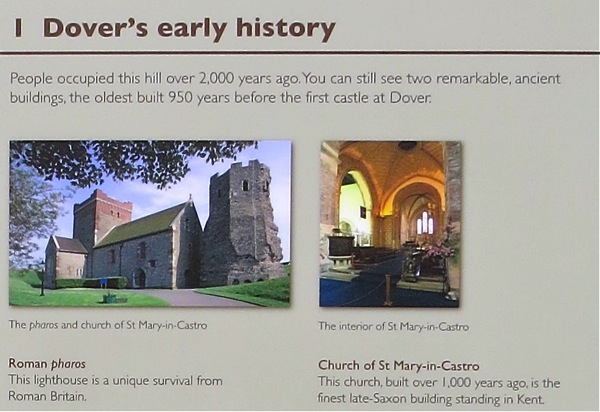 Jump ahead to 1066 A.D.E. and you have William the Conqueror sailing across with his Norman buddies and winning the Battle of Hastings and a crown for his head.

Move forward another century and you’ve got Henry II who, as one guide told us, built the castle for show. Evidently, according to the same guide, in 1179 the French King Louis VII headed over to Dover to pay what they say is the first state visit. Henry, realizing he had had no magnificent building with which to impress the French king, started piling money into this fortress located in Dover. He was going to make darn sure his place was going to be something people would talk about, in a good sense.

Another reason for creating a showplace was the canonization of Thomas Becket, the Archbishop of Canterbury. This priest was murdered mistakenly when hot-headed Henry II supposedly uttered ‘will no one rid me of this turbulent priest?!’ and off went four knights to do just that. Anyhow, Thomas Becket in death had quite a following along with the impressive cathedral in Canterbury. Wanting to counteract Becket’s growing popularity coupled with a desire to impress the French, Henry poured over a quarter of his average annual income into this castle.

The walls are 21 feet thick at ground level rising to 17 feet at the top.

Thanks to the organization English Heritage, the castle is decorated with exact replicas of what would have been in a medieval castle. (Anyone thinking of traveling in England for any length of time and/or visiting a lot of their sites, purchase an annual membership from English Heritage. Not only will one visit to one site practically pay for your membership, you’re also supporting a good cause. Thanks to cruiser friends, Dick and Moira Bentzel who told us about this.)

Adjoining this room was the scriptorium and what must have been the largest messenger bag ever.

Another small room off the king’s chambers was the wardrobe where Max was interested in trying on the mail.

The guide pointed out that, yes, it’s heavy but the weight mainly rested on the shoulders and on the hips, thanks to a belt. They also starting training at a very young age so were quite strong by the time they may have worn armor (if they could afford it or were given it by their lord). Plus, they were fit back then: whereas today’s guy would have a healthy caloric load of up to 3,000, back then they’d consumer 8-9,000. Sounds like my kind of diet.

The people working on the site were really well-versed in the history of each part of the site. For instance, the guide with whom we were speaking inside the castle said some of the clues it was for show vs. strictly for defense were:

Kitchen door on the first floor was way too big (easy to force an entry). 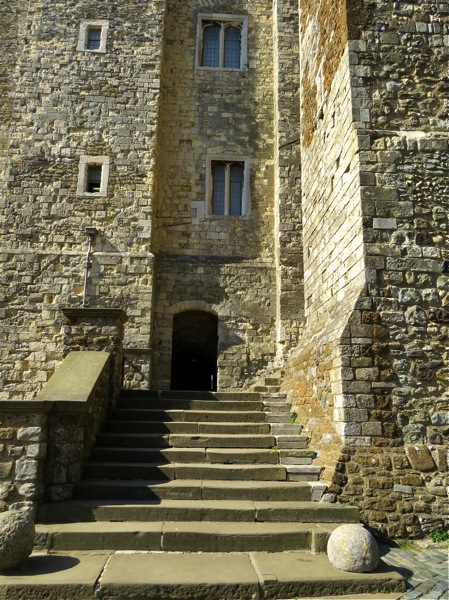 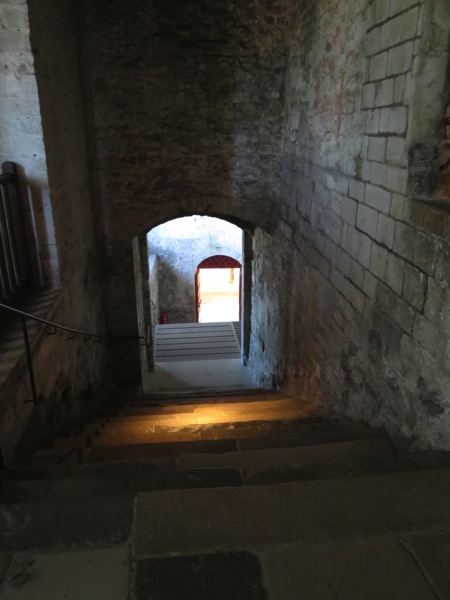 (You can’t really tell size of these steps but they gave me chills just thinking of the historical figures who walked upon them.) 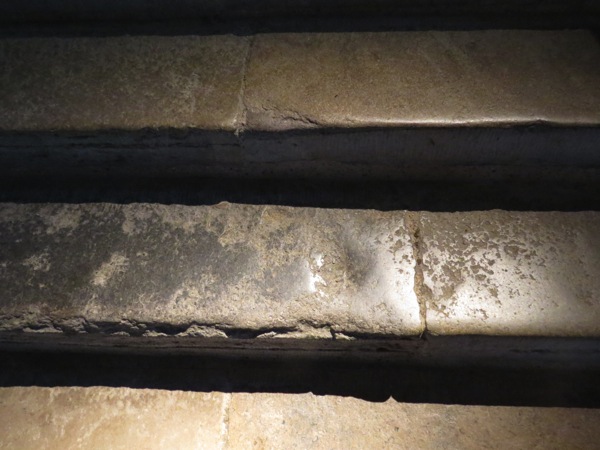 And, the construction was painstakingly decorated with alternating bands of black and white stone (more interested in how it looked than how it’d hold up).

I could have listened to this guy all day

but Max was getting a bit antsy, so we exited what they think could have been Edward I’s chambers (since he added the fireplace to make it more comfortable) and headed for the chapel.

The chapel is what Henry II would recognize as it hasn’t changed since he was here.

The kitchen was a wee bit different from George IV’s.

The well was 400 feet deep and located on the second floor next to the king’s chambers. Talk about a lot of digging.

Blast forward 600 years and you have the Napoleonic wars causing even more refurbishing and expansion of this fortress sitting atop the famous white cliffs of Dover. 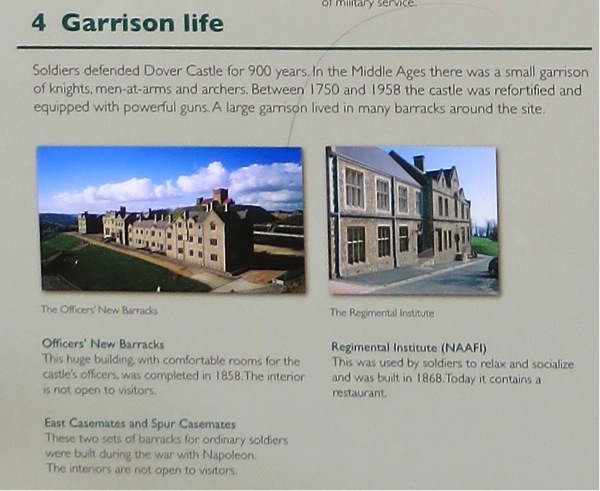 Add another 200 or so years to 1940 and you have the oft-told tale of the evacuation of Dunkirk known as Operation Dynamo and led by Admiral Ramsey. In tunnels facing the English Channel,

(looking from the west towards the east)

(and, east towards west) 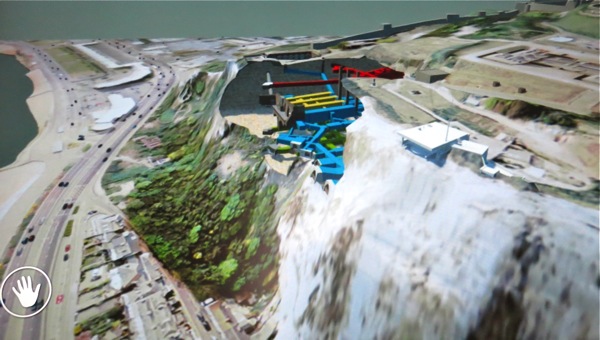 Ramsey and his team coordinated an amazing feat of saving hundreds of thousands of British and French troops when ambushed by the Germans May 1940. You quickly realize how daunting this task must have been, especially in light of having only one telephone line to Ramsey’s headquarters. All the other communications had to rely on telegraphs and signal flags from ships. 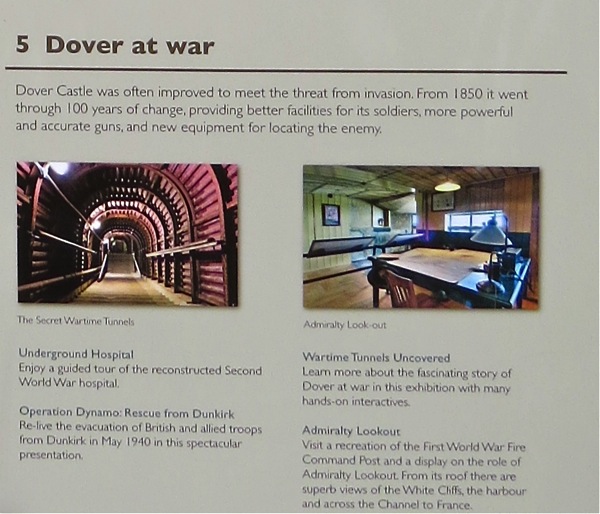 Below is a quote capturing the spirit of the men and women who worked tirelessly to save those who were fighting against the ugly tyranny of an evil, psychotic despot. 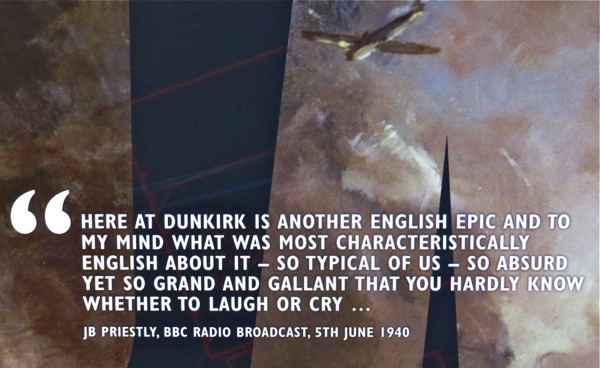 During our walking up and down and then up again, we took a lunch break almost sharing it with a mom and her baby, the latter annoying the heck out of the former. 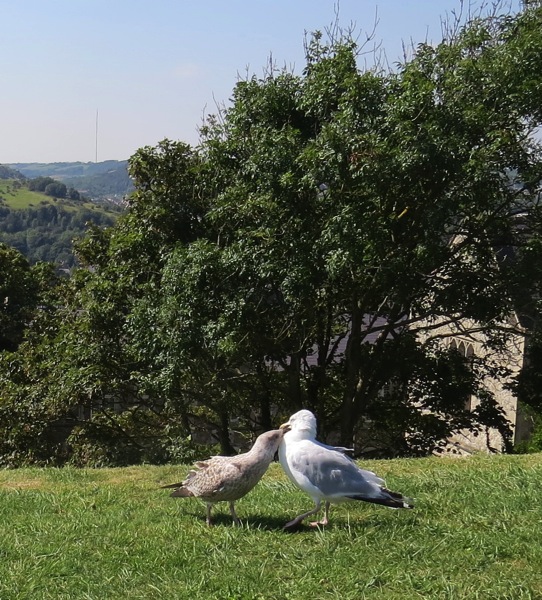 And, we took advantage of the view by snapping a photo of the harbor and our marina, way off in the distance, nestled behind the larger bodies of water. 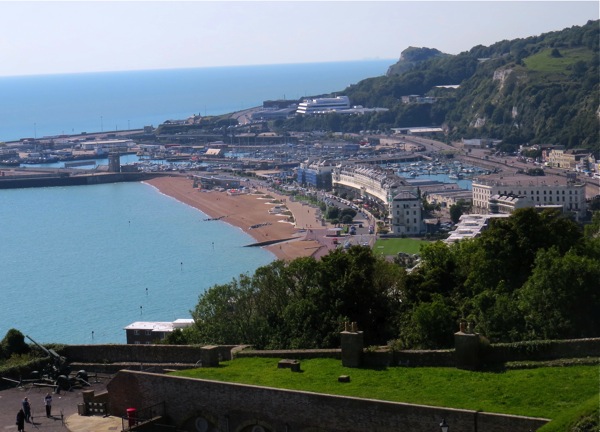 until we could spot JUANONA, under the blue tarp-wrapped boat, second one from the right.

Again, a visit that we thought would take an hour or so turned into an amazing passage through history. With tired feet we started our trek down the hill and towards home only to catch a glimpse of a ferry heading towards France.

Soon, we’ll say good-bye to Dover but we’ll always remain in awe of the history found atop its brilliant white cliffs.