If anyone who’s met my brother Cam and family, then they’ll know why this is for my bro. He and his two sons, Iain and Thomas, love to surf, and surf they do 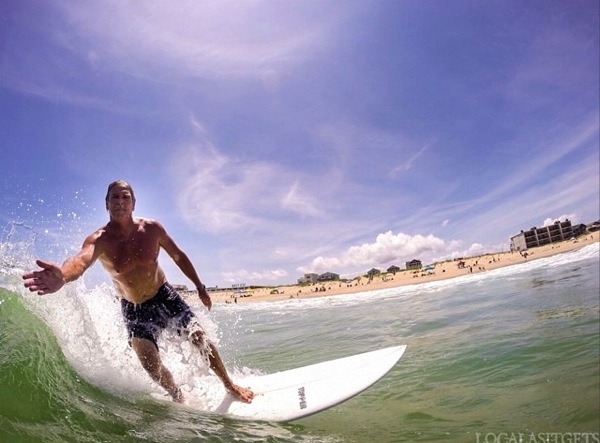 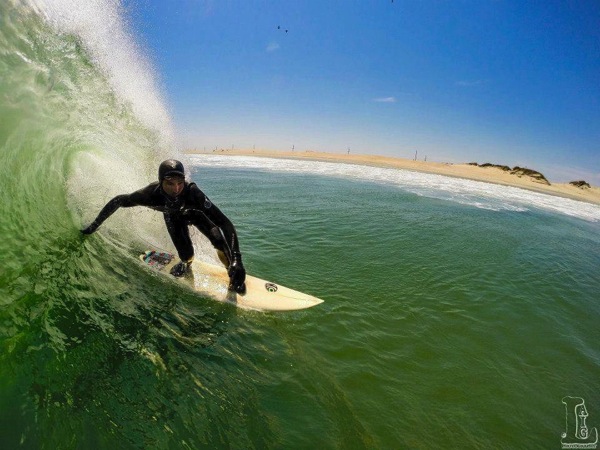 Peru, Mexico, Costa Rica, Panama, Ecuador… they’ve ridden a lot of waves along the east and west coast of the Americas.

And, it’s a passion. I’ll never forget the time Cam, Winn Crawford and I were hired to paint the Carver’s house two streets from the beach. Well, actually Cam and Winn were hired. I was subcontracted. They put me up on the back side, on the roof of the porch. There were no ladders involved where I was, so I didn’t mind. Until Mrs. Carver poked her head out and asked ‘you’re painting here?’ to which I replied ‘yes’ to which she replied ‘I wouldn’t. It’s not a good roof to be standing on.’ Thank you, Cambo.

But, that’s not the best part. The best part was calling for Cam towards the middle of the day only to discover he wasn’t there. He’d gone surfing, for the smart bugger had figured out the best vantage point to view the waves. He was gone with a capital G. Yet, even his painting position held some peril, such as when he fell off his ladder and left a human imprint in one of the Carver’s bushes.

So, when Max and I heard there was surfing on Sao Jorge, we decided to head there in honor of Cam, Iain, and Thomas. It was actually in one of the most isolated villages on this island, Faja da Caldeira de Santo Cristo. There is a path but not necessarily for a car. Rather, there were signs at the beginning and end of this ‘road’ listing times ATVs and motorcycles could use it. Other than those modes of transportation, it was two feet.

This walk was the final leg of a five-hour hike, which started on top of the island and wound its way down to these two little villages, ending in Faja dos Cubres. Looked like a nice way to spend a day.

Driving to the north side (Velas, where our marina is, sits on the opposite coast), we decided to take in the view from one of the ridge roads dissecting the length of the island. We passed the requisite pastoral scenes

stopped for a wall walk

and then took in the view… in mist

drove up a bit further and saw more mist

and even more mist

At one point, the wheels weren’t getting any traction as we tired to climb this one-land dirt lane. All I can say is it was a good thing Max was driving. If I’d been behind the wheel, we’d still be up there.

Arriving at the beginning of our hike, we decided to start with lunch at the little cafe in Faja dos Cubres. 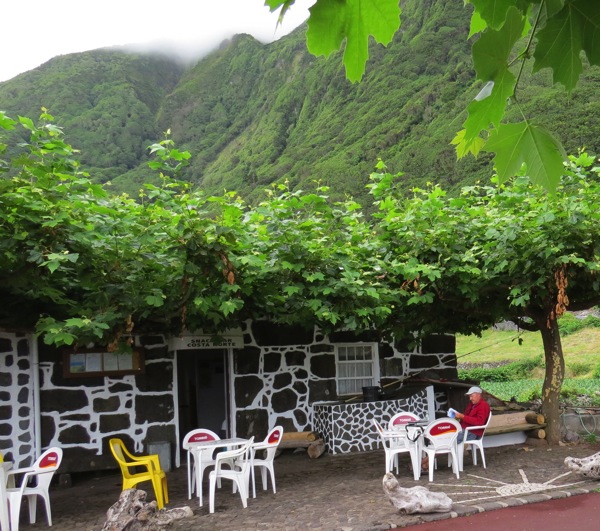 It was a pleasant spot but I wouldn’t say one goes there for the food. We both ordered hamburger and fries, and what we got was definitely dead cow cooked so much to death it resembled a hockey puck and anemic fries that mushed when you looked at them (NOT that we needed the fries). Fortunately, the coffee tasted like coffee, so all was good.

We started off after driving as close to the beginning of the path as possible (don’t want to waste the energy). It was relatively easy, with only a few ups and downs, and soon we came upon some potential surf 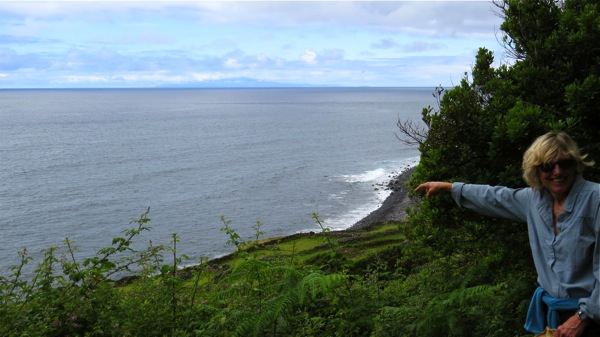 Turning the corner we saw our destination

and continued down to the Caldeira de Santo Cristo

however, the path only went halfway around. We thought we’d try a short cut across the gushing water, so Max ventured a tentative step or two

but the current was too strong and the rocks too slippery. We backtracked but not before snapping more pics of potential surf 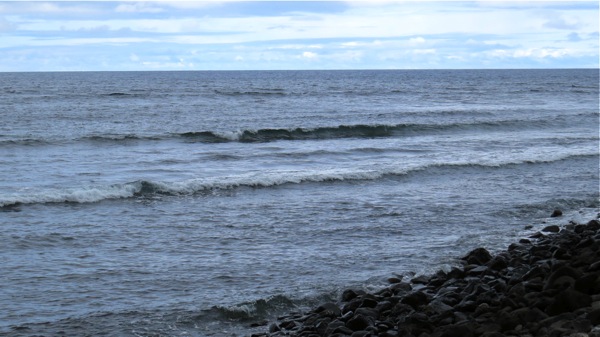 We knew we were on the right path when we were passed by our first ATVer and passenger, surfboard and all.

Walking into the village we found walls strewn with aloe,

lots and lots of aloe 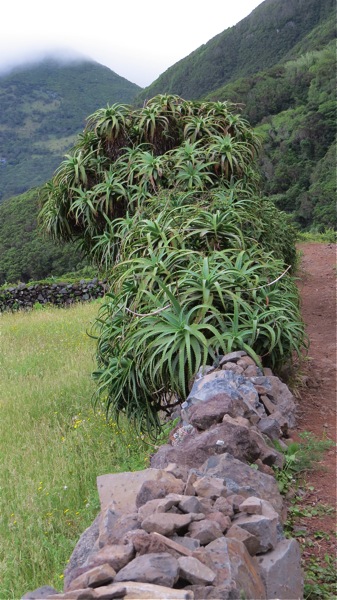 We also spotted the abode of a surfer

Some tour-guided hikers (roughly 20) were on the last leg of the full hike, but, other than those visitors, there weren’t a lot of people around. It was actually a little depressing since this beautiful spot felt empty and a bit run-down, the first time we felt this about one of these villages. Having achieved our goal of checking surfing, we quickly about faced and headed back home. 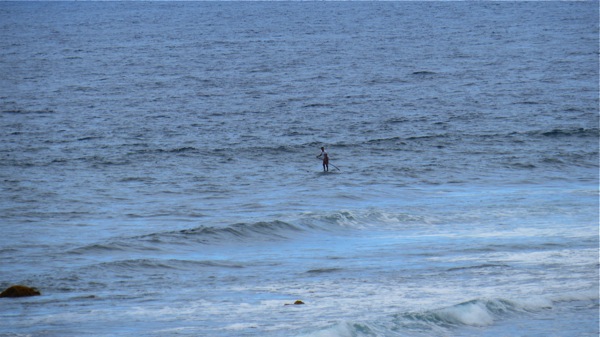 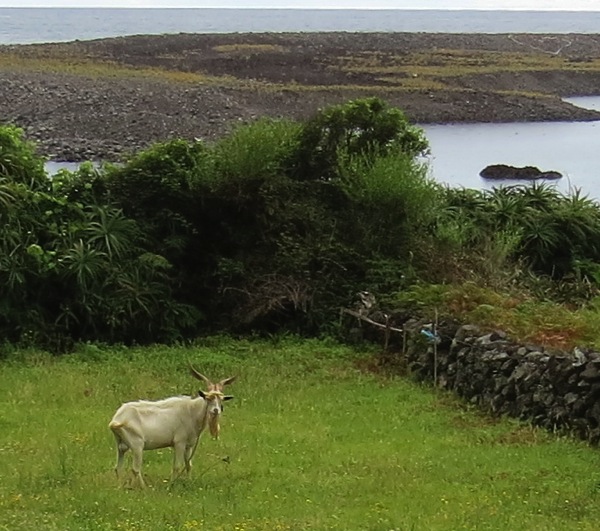 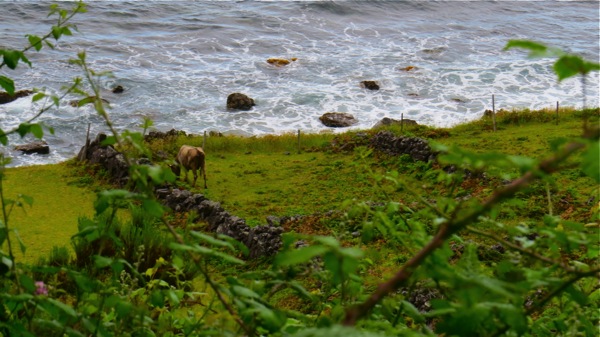 and another ATVer, this one carrying garbage out of the village

We also met a hiker from Portugal who worked in Angola. He and his wife were civil engineers and had taken jobs there, lured by higher pay. He had hiked ahead of his group of four, which included his wife and two friends, the latter living and working in the Azores. Later, Max saw them at the marina and invited them down.

They didn’t stay long as their ferry back to Horta was arriving soon, so we said our goodbyes and then settled down, posting one of the potential surf pics on FaceBook for my bro Cam and fam.