After two days along the coast we headed inland to the historic city of York. Only an hour away by train, this Yorkshire town built in 71 C.E. was originally called Eboracum and served as Rome’s capital of the northern province. It maintained its prominence after the Romans left, renamed Eoforwic under the Saxons. Danish names for streets show the influence of the Vikings who settled here beginning 867 C.E. and the city continued to thrive as one of Europe’s trading centers. York became even more prominent, becoming England’s second city between 1100 and 1500. When we mentioned York as a place we were considering visiting, locals enthusiastically agreed. 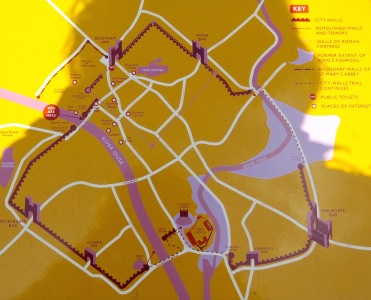 We can’t say enough about the friendliness of these folk! Everyone we’ve met goes out of their way to make us feel welcome, beginning with the marina folk here at Hartlepool. And, it’s not just in Hartlepool. On the streets in York a man stopped to ask if we needed help (we were trying to locate something on a map). He then went out of his way to ensure we were headed in the right direction.

So, on this Saturday morning we joined the throng of merry travelers including those continuing onto London two hours past our stop in York. It was packed, which meant making space on the floor since most seats were reserved. Armed with crosswords and sudoku, we easily passed time and within an hour were gliding into York.

Leaving the station we walked towards the river, following the ancient wall. And, found a mother goose and her ducklings alongside the river bank. 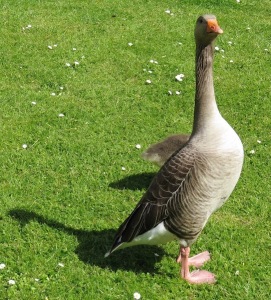 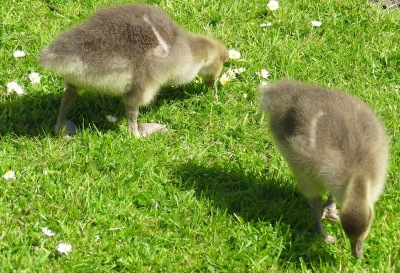 Our initial stop was the largest landmark in this ancient city, York Minster, towering over the narrow streets clustered around it, like a big hen and its brood. ‘Minster’ means a missionary teaching church, and York Minster is the largest medieval Gothic cathedral north of the Alps. Similar to other large cathedral sites we’ve visited, this cathedral is located where once a smaller, wooden church stood. Matter-of-fact, King Edwin of Northumbria was baptized here in 627 C.E., which means so was his grand-niece Hilda, that abbess mentioned earlier. 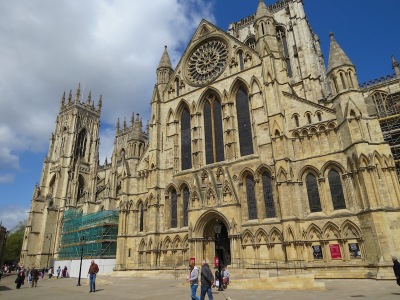 We entered the cathedral just in time to catch the beginning of an hour tour. The guide was informative without being overly so and we proceeded to learn about this awe-inspiring building begun in 1220 and completed 250 years later (lots of add-ons and renovations, not the least being a major fund-raiser to clean and restore some of the 128 stained glass windows). 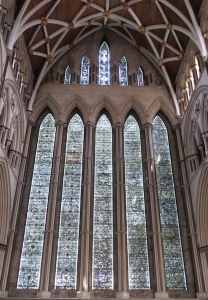 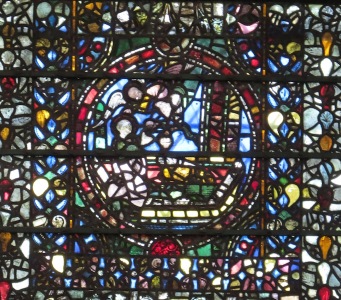 As we walked down one side and up the other, our guide pointed out old family shields hanging on the walls. These indicated who paid for those particular windows. Some windows also featured the donor with one set actually including a whole panel of the entire family. Nothing like cash to get you into heaven. Or, the good graces of powerful church figures.

The shields also helped identify the archbishops, such as this one on a tomb.

Our guide mentioned that the shields identifying who was who and the stained glass windows depicting biblical scenes were easy ways to inform a mainly illiterate public.

One of the unusual features was the Chapter House located behind the alter. 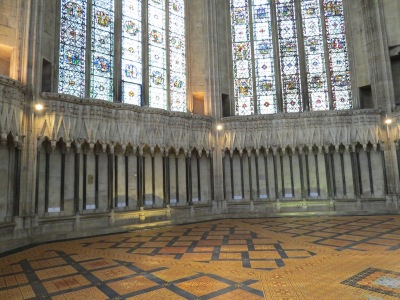 This room had excellent acoustics with each stone seat along the walls placed in its own alcove. Stone carvings ran above the seats, and, with so many faces needed to decorate such a room, most of the designs were left to the discretion of the carvers themselves, resulting in some quite startling expressions. 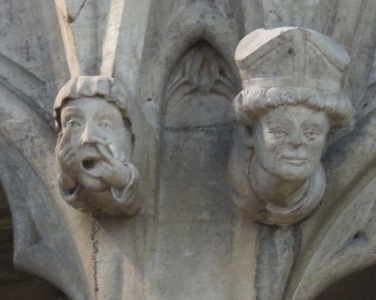 On one side of the choir stood a 15th-century stone screen. Statues of the kings of England were featured, beginning with William the Conqueror and ending with Henry VI. The latter was the pious king of the mid-1400s who built the King’s Chapel in Cambridge,  which we visited with Hugo back in April.

The last point of interest was a board listing all of the archbishops, including Thomas Wosley from Ipswich and who helped Henry VIII split from Catholicism. 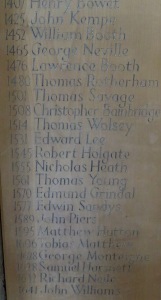 the statue of Constantine whose coronation was held here in 306 C.E. 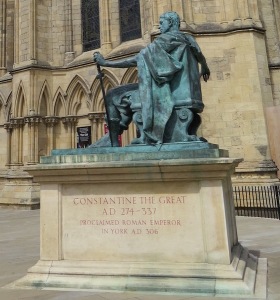 This town is loaded with kingly presence. Richard III, the last Plantagenet King, spent most of his youth at Middleham Castle north of York. He only ruled for two years, being defeated by Henry Tudor at the Battle of Bosworth. He had a soft spot for York, and the city milked it for what it was worth. No different from savvy politicians and their donors of today’s world.

You may remember hearing about this infamous (he’s the one who’s accused of murdering his two nephews in order to grab the crown for himself) king in the news this past March. His bones were recently re-interred after being found in a Leicester car park. Some say he wanted to be buried in York, but, Leicester was chosen because (a) he left no actual written will stipulating York as his desired burial place, (b) bodies are generally reburied where they were originally found, and (c) the Battle of Bosworth occurred close to Leicester. Also, as a gentleman told us who helped us with directions, a local leader has ties to Leicester, which easily could have influenced her vote on where to put Richard’s old bones.

There was a museum dedicated to Richard III housed in one of the original, medieval city gates, Monk Bar. We didn’t go to the museum but did climb to see the murder holes (where they dropped nasty stuff on anyone stupid enough to try to enter blindly) and the portcullis that still works (but wasn’t demonstrated). 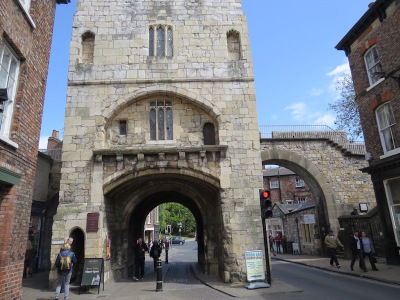 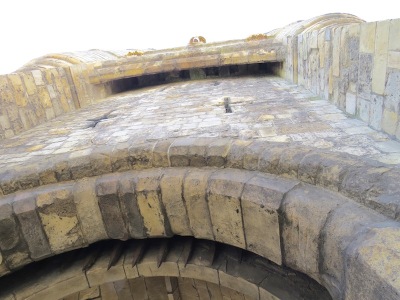 We peeked into a tranquil sanctuary, the Church of Holy Trinity. The guide who happened to be from Seattle (her father’s English, which is how she ended up here) walked us down to the original part of the church, which is roughly two feet below the current site) and pointed out some original Norman walls (marked by these chevrons). 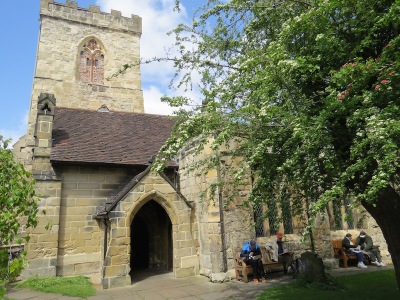 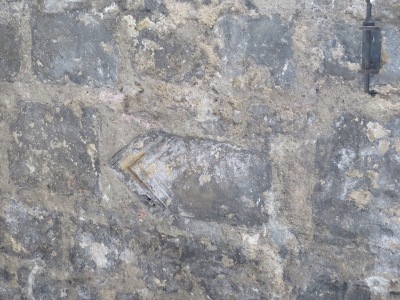 While wandering along these old streets we took in the end of a busker’s show (with quite an original name) eating are lunch brought from JUANONA. 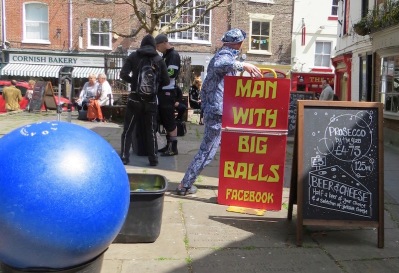 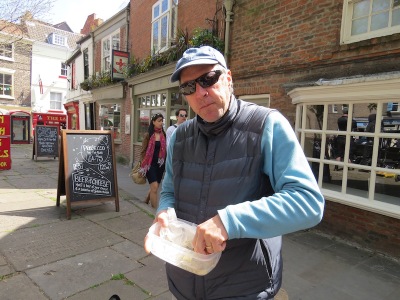 The crooked streets were filled with crooked houses, some more so than others. 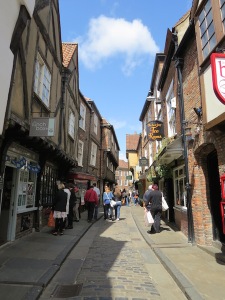 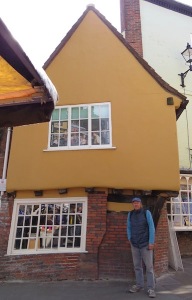 We walked to another medieval site, Clifford Tower. Located on a mound where William the Conqueror built his wooden castle (although he didn’t use it much), the tower was built by Henry III 100 years later. 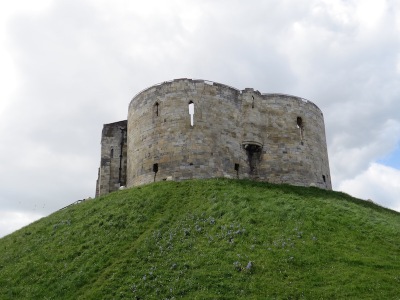 Max pointed out how far we’d sailed to-date on an English Heritage promo poster (we joined thanks to some cruisers who told us about this organization), 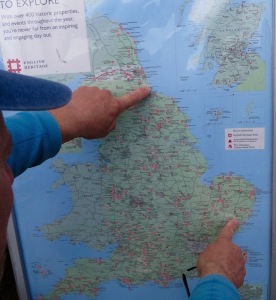 then we climbed to the top and tried to get a good pic of the tower model only to have an (American) kid constantly insert himself, which the mother only thought was adorable. 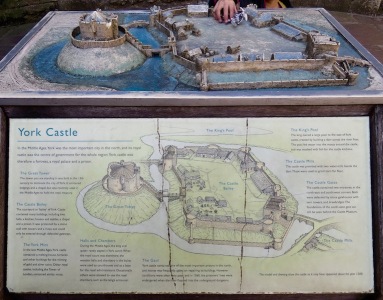 A good view from the top where I, with my fear of heights, kept a tight hold on the inner fencing. 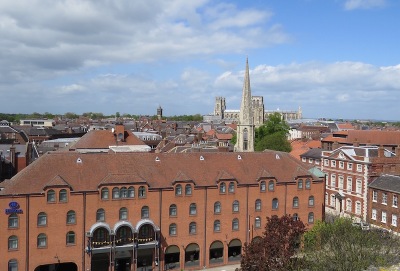 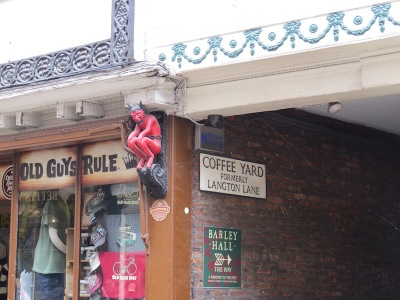 and continued to check out the Yorkshire Museum located in another green oasis, St. Mary’s Abbey, founded in 1086. Thanks to York’s wool trade along with royal and papal privileges this Benedictine abbey was one of the richest in Britain. We just perused the museum shop (we find that’s a good way to suss out whether we’re up for another cultural bit) with Max finding the perfect card for JUANONA (and him!). 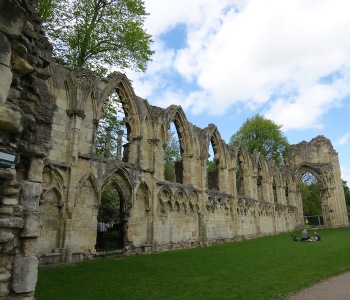 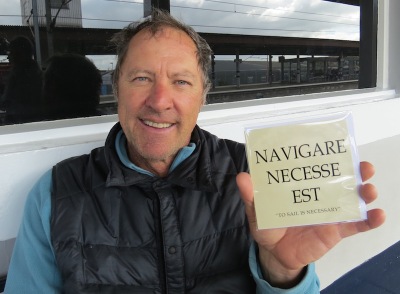 By then it was time to catch the train home as we enjoyed the afternoon sun, crossing the old city walls and back to the bridge we first crossed heading to York Minster. 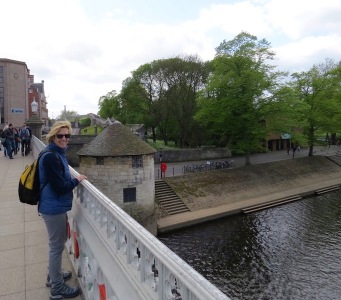 On the ride home looking out the window we passed the 19th-century white horse carved into the sides of Sutton Bank in the North York Moors. Reading later I discovered William Wordsworth and his sister Dorothy also visited these North York Moors in 1802. If the horse had been there then, we may be reading a poem today, only, I’m sure it’d be galloping through a host of golden daffodils.